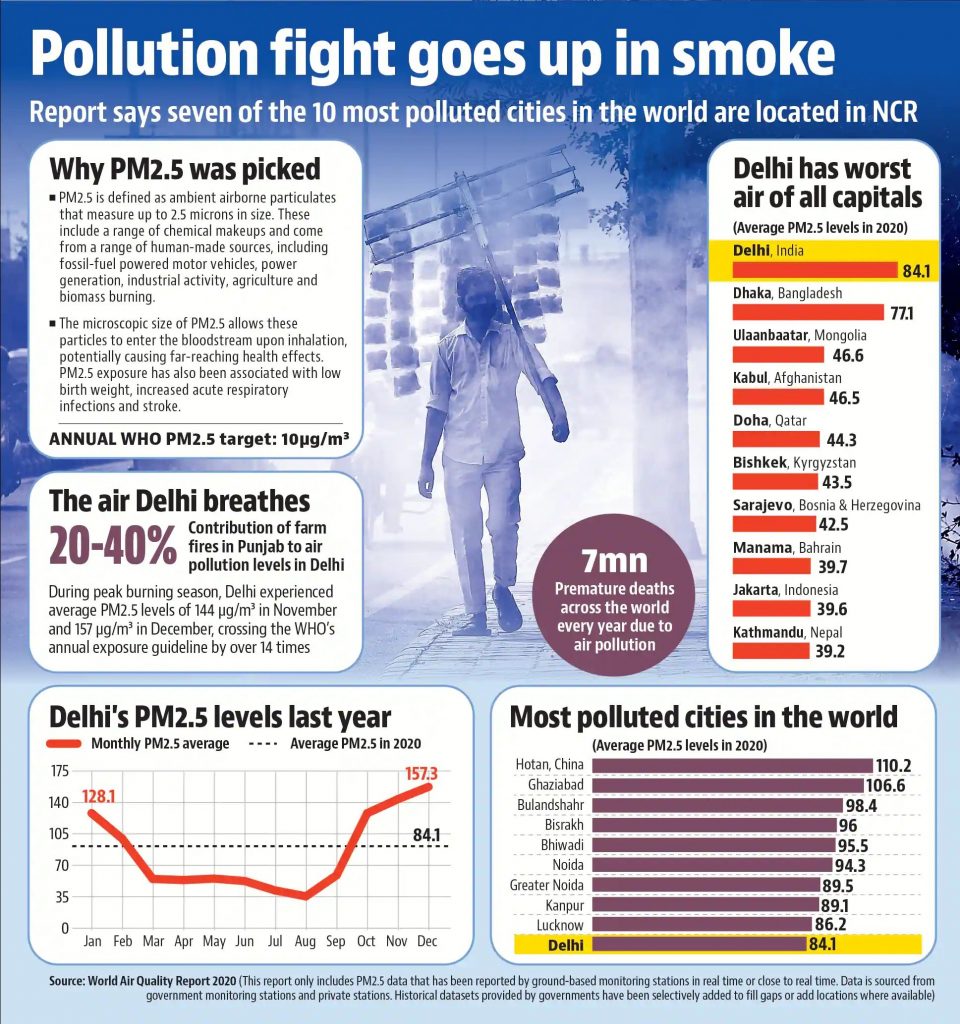 World Air Quality Report 2021 has unmasked the Modi government showing its ugly face which has been masked since April 7, 2015 by a so called flagship scheme to monitor air pollution in the country with the launch of National Air Quality Index. Despite the big claims, air quality in the country continued deteriorating, reflecting unpardonable dismal performance of the Centre Pollution Control Board responsible for monitoring, and functioning directly under the Union Government, turning Delhi into World’s most polluted national capital and no city left without disastrous level of pollution, with 11 of them dominated 15 in the Central and South Asia and 63 dominated 100 most polluted cities of the world. The economic impact is loss of over $150 billion yearly, while three deaths every minute linked to it.

When the World Air Quality Report 2020 had ranked India third most polluted country of the world with annual average PM2.5 concentration level 51.9 μg/m³, Delhi worst polluted nation capital with 84.1 μg/m³, and eight other cities of the countries more polluted than Delhi itself with Ghaziabad topping the list with 106.6 μg/m³, the Centre had dismissed such ranking on the ground that the ranking was mainly based on satellite and other secondary data not validated by “proper ground truthing”. The 2021 report now says that its data is based “exclusively” on ground sensors and almost half of them globally were operated by governmental agencies. What defense now Modi government is left with?

Since the report is based on PM2.5 concentration, ie the particulate matter consisting of fine aerosol particles, which is one of the six routinely measured criteria air pollutants and is commonly accepted as the most harmful to human health due to its prevalence in the environment and broad range of health effects, Modi government now needs to act fast rather than searching for some or other alibi or any weak defense of their dismal performance as it had resorted to last year.

Also, since the PM2.5 is generated from many sources and can vary in chemical composition and physical characteristics, the Centre must brace itself for monitoring, investigating, planning, and implementing effective measures now, rather than merely announcing flagship programmes for the same and doing only a little as if in a bid to hoodwink the people of the government’s activeness while sufferings of the citizens worsening day by day which we have been witnessing since the launch of its Air Quality Index in 2015, and more recently the National Clean Air Programme (NCAP) of 2019 that seeks to reduce PM concentration by 20-30 per cent by 2024. Since all the programmes of Modi government that set the targets to achieve by 2022 have failed, we cannot hope for achieving the target set by the NCAP, especially when all India average PM2.5 has increased sharply to 58.1 μg/m³ in 2021 as against 51.9 μg/m³ in 2020. This pollution is most likely to further increase with economic activities resuming fully in the post-pandemic era. The average PM2.5 level has now already returned to pre-quarantine concentration measured in 2019.

The latest report has also highlighted some of the mistakes of the Modi government. It has even quoted a recent study that has found that apart from city-specific action plans, no other plans have been formulated under NCAP prescribed timeline. Additionally, there is little information about the activities related to the NCAP, making it difficult to dispel the public’s dissatisfaction with the slow progress under the programme.

The severity of the level of PM2.5 pollution in India can only be understood in the light of new WHO air quality guideline issued in September 2021, reflecting the recent evidence of the significantly higher-than-thought impact of even lower concentrations of air pollution on human health and wellbeing. Even the pollution concentration around the new guideline should not be considered safe, say scientists. As per the new WHO guideline the PM2.5 level must be lower than 5 μg/m³.  As far as India is concerned, no city met this guideline, while 48 per cent cities exceeded 50μg/m³ (10 times) pushing up the average to 58.1 μg/m³ (almost 12 times). Even the national Capital from where Modi rules the country saw a 14.6 per cent increase in PM2.5 pollution.

Modi government now must rise from slumber it has been in, since air pollution has a massive impact on human health and is the second biggest risk factor. Since vehicular emissions, power generation, industrial waste, biomass combustion for cooking, the construction sector, and episodic events like crop burning are the major cause of air pollution in the country, the centre urgently needs rethinking on its present strategy that has obviously failed in reducing or controlling the air pollution.

What else the government can do? The general recommendation of the report is worth taking note of that includes: Pass legislation to incentivize the use of clean air vehicles for personal and industrial use; Invest in renewable energy; Provide financial incentive, such as trade-in programmes, to limit the use of combustion engines; Provide subsidies to encourage use of battery and human-powered transportation methods; Expand public transportation and power with clean and renewable energy; Build additional infrastructure for pedestrian and bicycle traffic; Strengthen and enforce emission limits for vehicles and industry; Adopt new 2021 WHO Air Quality Guidelines; Implement forest management strategies to limit wildfires; Ban agriculture and biomass burning; Develop innovative civic strategies for improving air quality; and Expand air quality monitoring framework.

‘Synchronised’ Fraud By Government And Oil Companies Is Back
Posting....