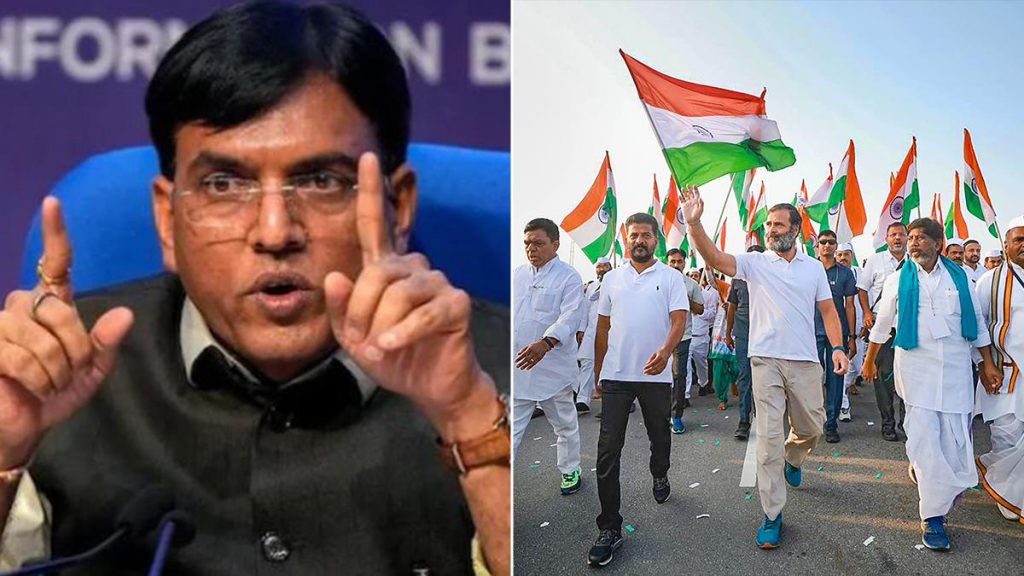 Reports have been doing the rounds that Rahul Gandhi was planning a short break from the Bharat Jodo Yatra to mark Christmas. BJP spokespersons have been asking with sly grins what if Rahul Gandhi took a Christmas break and went to Bangkok? This, even as the ruling party was getting perturbed as the yatra ate up the miles, relentlessly leaving the BJP out of popular imagination.

But now nobody can accuse Rahul of being in character! Neither the BJP nor Prime Minister Narendra Modi have reason to gloat. BJP spokespersons have been for the past couple of weeks praying for Rahul Gandhi to take a Christmas break just so that they get the chance to question his commitment to Bharat Jodo Yatra.

The Modi government has given to Rahul Gandhi a Bharat Jodo ultimatum: Wind up BJY for the safety of the entire Bharat. Union health minister Mansukh Mandaviya has written to Rahul Gandhi and Bharat Jodo Yatra to follow Covid guidelines or wind up BJY. The BJY is coursing through Rajasthan these days and, therefore, Rajasthan Chief Minister Ashok Gehlot has been copied to Mandaviya’s ultimatum.

Mansukh Mandaviya has asked the BJY to follow Covid restrictions or the yatra should be stopped pronto, no questions asked and no quarters given. Not in so many words but the drift is set in cast-iron. If Rahul Gandhi and Ashok Gehlot fail to address the Centre’s diktat, BJY will be called all sorts of names including ‘Bharat Covid Yatra’.

Over the past 100-plus days, the Congress MP’s endurance feats have been giving BJP spokespersons sleepless nights. BJP MPs and MLAs half Rahul Gandhi’s age couldn’t have led the BJY from so far for so long—over 2500 kilometres for over 100 days and still look fresh as morning dew. The BJY will be in Delhi shortly and thereafter in Uttar Pradesh.

The Union health minister in his letter to Rahul Gandhi has spoken of a “public health emergency” and that the BJY should follow Covid restrictions, including the use of masks, and sanitizers. And “only vaccinated” people should join the yatra, begging the question isn’t the Modi government trying to be too clever by half?

Should participants carry vaccination certificates with Modi’s face on them? The Modi government does not have the guts to order BJY to grind to a halt in the Rajasthan desert. After all, it’s a national health emergency. How can and why should the Centre allow the BJY to continue when it is next to impossible to monitor Covid appropriate behavior of the Bharat Jodi Yatra, keeping a tab on a moving political movement?

What if somebody alien and motivated, and above all, infected, crashed the party and spread the virus all over BJY with an ulterior motive, and then blame the Congress and Rahul Gandhi for reintroducing the coronavirus to Indian lungs? Anything is possible in India’s political party-eat-political party political scenario. Nothing odious cannot be ruled out.

Look at what all it takes and means to impose Covid-appropriate behaviour on something as animal and alive as the Bharat Jodo Yatra! Social distancing, for one. All participants shall have to maintain a social distance of at least six feet from each other. Rahul Gandhi will be forbidden to hug and hold hands of participants. And masks will be a must.

Mandaviya’s Covid protocol for the Bharat Jodo Yatra is like pronouncing the death sentence for the yatra. The BJP government now gets a scapegoat to blame a Covid-19 outbreak, and a ready-made excuse to shut down the Bharat Jodo Yatra at the height of its popularity. Nothing spells convenience and chance better.

The Mandaviya protocol is designed only for the Bharat Jodo Yatra. According to the Washington epidemiologist Eric Feigl-Ding, 60 per cent of China, and 10 per cent of Earth’s population will be Covid-positive in the coming 90 days, but Mandaviya only sees BJY as a likely super-spreader. What about political rallies, the cinema and weddings?

What about the scores of events planned for India’s year of G-20 presidency? Can Mandaviya put a stop to the gala New Year carnivals, and ask 5 and 7-star hotels to shut down? Ninety days is three months and India cannot hide behind “natural immunity” for that long.

China is getting the flak for its Covid surge and the Chinese people are suffering for believing in Xi Jinping’s leadership. Can and should the people of India believe in the immortality of Prime Minister Narendra Modi’s leadership and give a pass to everything but the Bharat Jodo Yatra? Even the best of leadership is bound to slip at the best of times and these are precarious times. (IPA Service)