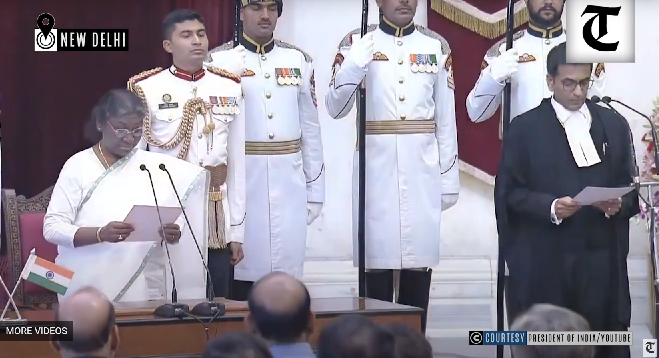 “It is well for a judge to remind himself or herself of the fact that flattery is the graveyard of the gullible”, said then Supreme Court Justice Dr. D.Y. Chandrachud, in one of his judgments. While being alive to this thought of his and how he handles encomiums, here’s why the new Chief Justice of India (‘CJI’), Dr. Chandrachud means the dawn of hope to new India.

While talking of the new CJI (‘DYC’, as he is endearingly referred to), what is spoken of in terms of his strengths is more of the new order he represents than of himself as an individual shouldering an onerous and powerful position of being a judge as well as the administrative head of the judiciary. The new CJI is known for his pleasant demeanour, youthful energy, sharp intellect, and distinguished legal acumen.

This vivacity is reflected with greater vigour in his judgments – on the right to privacy, decriminalising homosexuality, adultery, his dissent in the Aadhar case, abortion rights to unmarried women and to married women who are victims of marital rape, women’s equal right to work- right to permanent Commission in the Army, recognising and protecting against intersectional discrimination, reasonable accommodation in respect of the disabled, maternity benefit to mothers who conceive through surrogacy, acknowledging the changing definition of the family and the household, to name the star judgments of the many erudite ones he has authored. His progressive thoughts, in sync with the times, are cast in iron in his judgments, which bear the unmistakable stamp of his compelling commitment to personal liberty, individual dignity, and equality, holding them in high esteem, while upholding the pluralistic ethos of our nation and society, and guarding against erosion of secular values.

His journey in epoch-making began two decades ago, and the expectations from him as a CJI is at an all-time high, with the addition of administrative duties, in terms of judicial appointments, and in the arena of efficacious and faster delivery of justice. It is a momentous time for the nation and the judiciary in specific that the man who could give flesh and blood to the organic and transformative element of the Indian Constitution, in order to make it the protective armour of citizen’s rights in all aspects of their life, is at the helm of affairs in a new, changing and evolving India, where the stereotypical definitions are fast changing in all areas of life.

It is worth mentioning that the CJI’s commitment to the values that stand out in his judgments are also seen in his personal interactions with people who work with him.

In an article in The Week, one of his former judicial clerks, who is visually disabled, has elaborated on his inclusive experience in working with Justice Dr. Chandrachud, when the latter took many steps to implement the principle of ‘reasonable accommodation’ to make his judicial clerk have accessibility and comfort in all aspects of work on par with his sighted counterparts, including introduction of audio captcha on the Supreme Court website, and directing that all files and written submissions were to be mailed in PDF format in order that a screen reader could read all files for the benefit of his judicial clerk.

Beyond all trappings of power and position, legal jargon and prolix judgements, what stands out to the litigant public is the degree of sensitivity employed by the judges to see through the technicalities and to reach out to them to address their real grievances. This, the new CJI, has excelled at and set a very high standard for everyone to follow in the higher judiciary as well as the subordinate judiciary.

The constitutional and legal principles applied in his judgments, reflect the welcome progressive thought of the higher judiciary, rejection of artificial distinctions and discrimination, and an equal acceptance of the State of all its citizens, regardless of their gender, sexual orientation, social status, and disability, to ensure their equal participation and enjoyment in all areas of life as equal stakeholders of society. This augurs well for a nation, diverse in every way while being unitary in spirit, and where the only test to be applied is that of constitutional morality.

While the term ‘constitutional morality’ is still being debated and is likely to be given expansive scope and meaning in the upcoming times, what one understands at the very first blush would be to mean the judiciary’s single-minded commitment to the Constitution, its ideals and philosophy, and importantly putting them first. The judiciary deserves the credit for making the Constitution stand strong when faced with a storm of attacks from within and without, and in this, judgments by the CJI in cases mentioned above have been the sturdiest of pillars.

Such judgments have ensured the rich display of resilience by the Constitution with its ideals of liberty, equality, justice, dignity, democracy and secularism emerging more extensively meaningful than ever before. And for as long as these ideals are protected with unflinching commitment by the judiciary, even in the face of staunch attacks by majoritarian onslaught of ideology or politics, it can be asserted with faith and certainty that the Constitution will survive.

The new CJI will also have to ensure the independence of the judiciary and guard against the shifting of power of judicial appointments in any manner not constitutionally contemplated, as well as continue to fortify the secular democratic credentials of India.

While there is natural tendency to compare any CJI with his predecessor(s), especially when they have been hugely popular, the new CJI faces the formidable twin challenge of standing up to the legacy of Justice U. U. Lalit in terms of his blitzkrieg reforms in 74 days (increased listing of cases and setting up of more than one Constitution Benches), as well as measuring up to the expectations from his own larger than life persona.

The next two years are going to provide him further chance to be the harbinger of a more sensitive judiciary and to usher in systemic reforms in the judiciary. It is entirely for him to raise the bar of the judiciary to its highest, in order that it may attract the best talent of the country, given that it is Lady Justice that we must care for, for all time to come. (IPA Service)

TMC Corruption And BJP Infighting Give Some Hope To Left Front In Bengal
Posting....