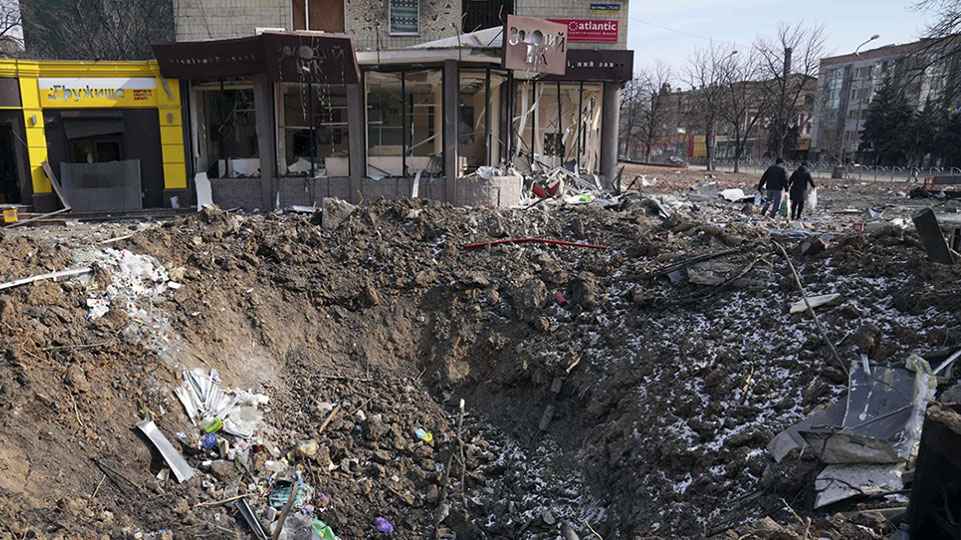 Charges and counter-charges about war crimes and genocide are being used by those on both sides of the war in Ukraine who are intent on minimizing diplomacy and emphasizing warfare.

With the war raging and the suffering of Ukrainians continuing as they spoke this week, both the Russian President Putin and U.S. President Biden made remarks that dimmed the hopes for peace.

Putin denied that Russia was behind massive atrocities and war crimes, accusing Ukraine and the West of orchestrating fake claims about them. He said that the war will continue until its “full completion of tasks that have been set.”

Biden, meanwhile, accused Putin of genocide, declaring that the war crimes committed by Russia showed its intention of wiping out the Ukrainian people altogether and he announced his approval of additional and more sophisticated weapons to Ukraine.

Ukraine, which only two days ago was still holding out hopes for peace talks, said yesterday it was satisfied with the amount and types of weapons the U.S. was sending to Ukraine but that the only hope on their part is that the delivery of those weapons would come faster than they have been coming thus far.

Hopes that peace talks might achieve an early end to the conflict had taken more and more urgency in recent weeks as Ukrainian civilians have clearly been targeted with rocket strikes and many have been murdered during the Russian occupation of suburbs north of Kiev from which the Russians have now withdrawn. Ukraine and the United States have said Russia is responsible for all of the rocket attacks and the murder of all of the civilians.

A report published today by the Organization for Security and Co-operation in Europe said that it had found “clear patterns of [international humanitarian law] violations by the Russian forces” during the war, but Moscow denied the finding and said that the report’s authors had all been chosen by the Ukrainian government.

The same report said that it had documented violations by Ukraine as well, but those by Russia were “far larger in scale and nature.”

An International Criminal Court (ICC) investigation is now underway in Ukraine, but since Moscow and the U.S do not recognize the court it is unlikely that Russian soldiers or officials will end up being tried by it.

ICC prosecutor Karim Khan said after a visit to Bucha – where numerous atrocities occurred – that Ukraine “is a crime scene,” but he cautioned against jumping to conclusions, saying investigations must “pierce the fog of war” to determine what had happened.

Russia has retreated from its encirclement of the Ukrainian capital, but satellite imagery shows a regrouping of forces for a new offensive in the east that seems aimed at taking the whole Donbass region, and statements by the Russia-backed Donetsk People’s Republic support that claim.

Donetsk and Lugansk, Russian-speaking regions that rose in revolt after the 2014 U.S.-backed coup in Kiev in 2014, have been fighting the Ukrainian army and neo-nazi paramilitaries aligned with it for eight years. Pro-Russian commandos announced last weekend that they had shot to death Taras Bobanich, the leader of the neo-Nazi Right Sector which was one of the key organizations that orchestrated that coup.

The charges by the U.S. and Ukraine that Russia is committing genocide are not the first time such charges have been made. Putin claimed back in February that Russian speaking people in Ukraine had been facing genocide at the hands of the Ukrainians and he gave that as a major reason for his invasion of the country.

Groups inside and outside of Ukraine are now using the genocide issue to step up their opposition to peace talks that the Zelensky government has been pursuing with the Russians.

Several Ukrainian commentators, appearing on American cable TV shows, have been saying talks with people who commit genocide are useless, with a few even noting that no one ever tried negotiating with Hitler.

Zelensky has had to deal with forces in Ukraine to his political right, forces including members of Parliament, who don’t want talks to succeed and who want to make no compromises whatsoever with the Russians. He had hoped that by banning all the progressive opposition political parties and TV stations he would satisfy them but that has apparently not worked.

In the U.S., meanwhile, President Biden’s charges of genocide, intentionally or unintentionally, took the pressure off big oil companies for the rise in prices and inflation generally in the U.S. Playing the protector of the people being hit with price increases, the president declared that he will not allow a “genocidal leader” of a foreign country to drive up prices Americans have to pay.

The message is that it is a “genocidal” Russian leader, more than U.S. oil companies and profiteering capitalist companies in general, that are raising our prices and causing inflation here at home.

Also in the U.S., several talking heads on “liberal” MSNBC and other “progressive” networks have latched onto Biden’s use of the term “genocide” to dampen hopes for peace talks. They have said that when you have one party guilty of genocide, the only way to end the conflict is to deemphasize talks and enable an “outright victory” over Russia by Ukraine. They have not, as yet, defined what such a victory by Ukraine or even one by Russia, would look like. The vast majority of the working people of both countries have suffered unimaginable losses in the war, losses that cannot be measured or ever allow a real “victory” to be declared.

In Ukraine, Russia, the U.S., and Europe there have been some victors, however, but they are the weapons manufacturers, the fossil fuel giants raising their prices everywhere, warmakers in the Pentagon, NATO, Ukraine, and Russia, and wealthy capitalists in all the countries involved. In Ukraine and Russia both, the wealthy capitalists include those who stole the public resources available in both countries during the socialist years of the Soviet Union which encompassed both Ukraine and Russia.

Diplomacy, compromise, a neutral Ukraine, and withdrawal by Russia must become the universal demands of a vigorous peace movement everywhere. Humanity demands an end to this war because its survival may very well depend upon ending it. (IPA Service)