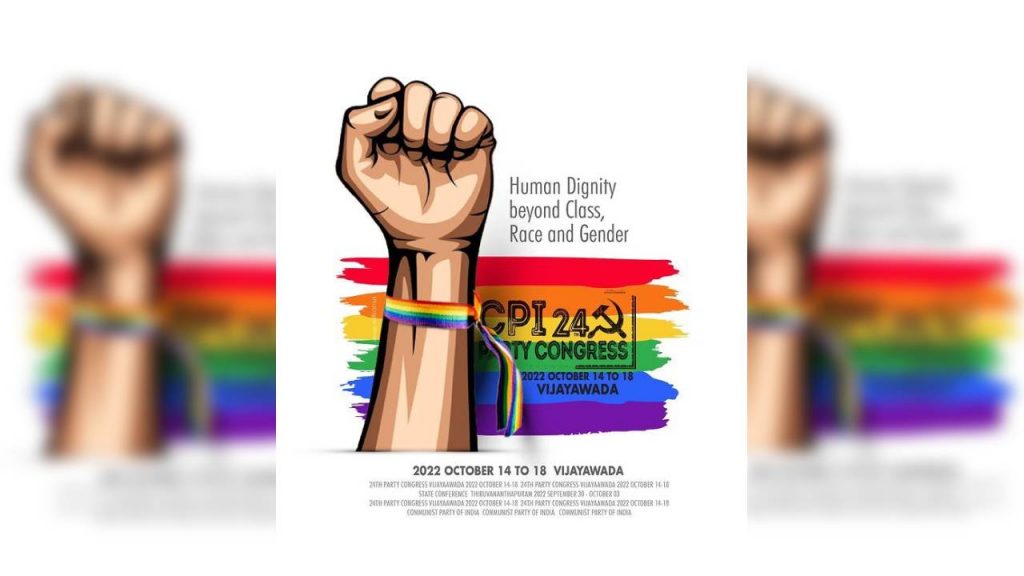 The heroic city of Vijayawada is all set to host the 24thCongress of Communist Party of India (CPI). The city has hosted the Party Congress twice before, in 1961 and 1975. On October 14, 2022, the Red flag, the flag of hope will be unfurled there again to mark the beginning of the 24thCongress of the Communist Party of India. Up to October 18, the days and nights of Vijayawada will be electrified with purposeful discussions and meaningful path searching.

Representing  6,40,344 (2021) members of the party, approximately 900 delegates will devote their energy and experiences to find out the ways and means to strengthen the Communist Party to face the challenges of contemporary times. The strategy and tactics have to be evolved to take the country forward after putting an end to the RSS-BJP rule which has landed the country in unforeseen crisis. The 24thCongress is expected to give a call to build up a broad coalition of secular, democratic, left forces that can save the country from the crisis ridden situations. In that sense, the24thCongress of the Communist Party of India should be termed as a landmark political event in the history of the country.

Communist Party is the party of genuine patriotic forces. It has played undeniable role in the ‘Long Walk to Freedom’; along with the people of India. Communists were the first to raise the slogan of ‘Poorna Swaraj’ in the agenda of Indian Freedom movement.  The long and varied history of the freedom struggle is soaked with the blood and lives of the Communists together   with the fighting masses.

Responding to the call of freedom, the Communists stood in the forefront to organize militant movements of the peasants and workers, students, writers, and artists. Those sagas of sacrifices are unforgettable. At the same time the Communists are conscious about international developments which are vital in shaping the politics of any country. With that understanding, the Communists held high the banner of internationalism in the past and present. With the spirit of international solidarity, after a long gap, several fraternal parties from different continents will physically participate in the 24th Congress.

Their experience of political battles during the neo liberal period will be shared during the party Congress. Throughout its history, the CPI stood for the unity of the left forces.  It believes that such a unity of the left will be a message for all other democratic forces to come together to fight for the common cause. Upholding the importance of left unity, the CPI has invited other left parties also to come and greet the Party Congress.

Their presence in the CPI Congress has a wider meaning. The participants in the 24th Congress will naturally make indepth analysis of the international and national political scenarios and draw its lessons for the party’s onward march. Imperialism and its pursuit for super profits and world domination continue to threaten the countries and people all over the world.  Its war designs have plundered human resources to unimaginable magnitudes. Having failed to resolve the crisis, those forces of global reaction are fostering religious extremism and neo fascism in various countries.  The masses are not ready to surrender before them. In many countries people are waging victorious political battles against them.

The victories of left and democratic forces in several countries of Latin America are matters to be studied carefully. India needs a change. The RSS-BJP rule has terribly weakened the secular foundations of this great country. It has shattered the living standards of the people.  Its promise of achhe din has been proven a big lie under Modi rule.  The rich have become richer, and the poor became poorer. The government is doing overtime job to hide their failures through their propaganda skills. The public sector which was considered to be the strength of our economy is under constant attack. Banks and insurance companies are being privatized.

Railways, ports, and mines are all placed for sale. Unemployment has crossed all the previous records. Price rise has become the order of the day. Indian rupee has become a helpless prey before the greed of ‘almighty’ dollar. The dreams of the people for a better life have been completely mortgaged before the profit motives of international and domestic capital.  Adani has become their symbol for development.

At the same time, they believe that FDI is their Mantra of all growth. To prepare their ground, the RSS-BJP government has intensified its vociferous attack on the Constitution of India. The Constitutional principles such as secularism, democracy and socialism have become their targets of attack. Religious faith and places of worship are cunningly misused to divide the people and to deviate their attention from the real issues of day-to-day life. They take the path from pages of Mussolini and Hitler. Our country can survive only by defeating them.

The CPI is the first party to identify the right wing reactionary character of Modi Government controlled by the fascist ideology of RSS. The commonness of views expressed in the writings of Hitler and Golwalkar spoke voluminously on their ideological togetherness. Through their words and deeds the RSS proves that they are the Indian version of Hitlerite fascism, subservient to finance capital and loyal to the idea of racial pride. That is why the Communist Party had no hesitation in calling them fascists.

When a regime dictated by fascists comes out to dismantle the basic structures of national life, the foremost task of the Communist Party is to fight them ideologically and politically. The CPI is guided by that ideological clarity. Hence, the party gave the clarion call for the broadest possible unity of all secular, democratic and left forces. The draft Political Resolution to the 24th Congress is based on this perspective.  The democratic debates in the Party Congress will give the final shape to the Communist policies in the days to come.

When the Indian polity is to face a life and death battle in 2024 general election, the politics of unity of anti-fascist forces have utmost significance. The Communist Party believes that all likeminded forces will rise to the occasion and fulfill their responsibility to the people and history. The delegates attending the Party Congress are leaders tempered in the thick and thin of mass struggles in various conditions. They know very well that to win any battle a correct political line alone is not sufficient. It needs a strong, well equipped, and powerful weapon to meet the challenges. In this regard, the organizational preparedness of the Communist Party is of cardinal importance.

The CPI is aware of this fact and in its 22nd Congress at Puducherry alerted the entire party to “reconnect with the people”! The 24th Congress renews the pledge and carries forward that duty with maximum dedication. The people look at the Communist Party as the Party of dedicated warriors committed to the cause of the poor and working masses. For them it is the party of hope. The delegates to the Party Congress remain trustworthy to the people of this country and to the Red flag, which is their pride. They believe in the cause with all their mind and emotions.