Ukraine Crisis: Sanctions On Russia Will Benefit America, Not EU 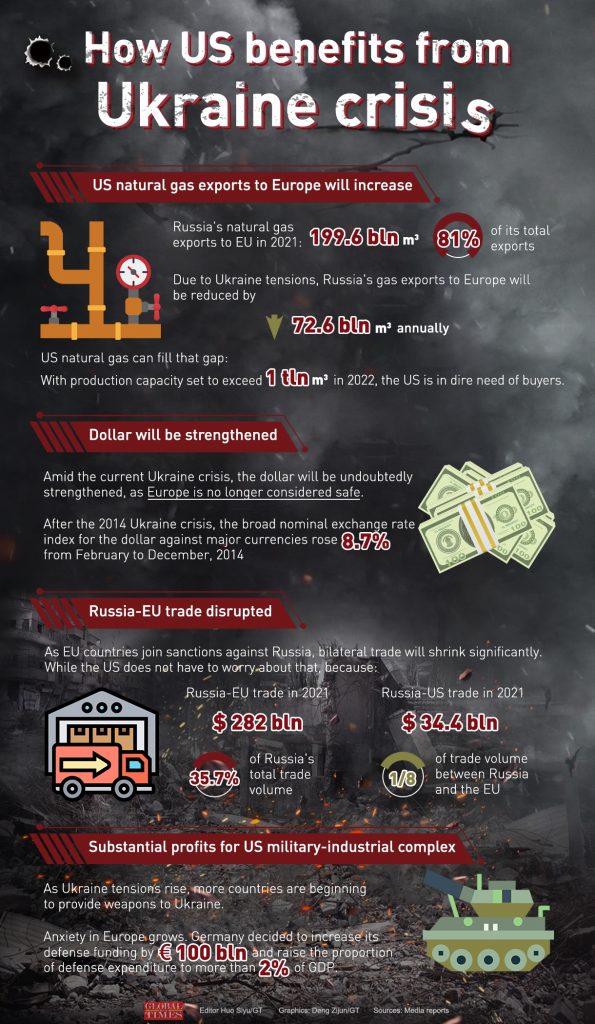 By Nilanjan Banik and Guido Cozzi

In his State of the Union address, United States President Joe Biden made it clear that the US was not planning to send troops to Ukraine. On earlier occasions, former POTUS Bill Clinton sent troops to Yugoslavia, George W. Bush to Iraq and Afghanistan, and Barack Obama to Libya. As history would have it, in all these occasions, the US gained little except for spending trillions of dollars. In Afghanistan, for instance, the US spent close to $2.2 trillion, only to see the country getting back to the Taliban after two decades of war.

Rather than a direct war, the list of sanctions imposed on Russia is going to work in favour of the US. More than before, there will be an increasing urge on part of many other countries in Europe, namely, Ukraine, Finland, Sweden, Moldova, Kosovo, etc., all bee-lining to become members of the NATO. Without a single shot being fired, the US action will ensure a geopolitical victory. The present circumstance will lead the united EU to ramp up military spending, long-deferred until a month ago, despite repeated pressures by the US, especially by the former President Donald Trump. Like during the period of the Cold War, a militarily weak and emotionally scarred Europe, suddenly has become Washington’s most loyal ally on all emerging issues. The US seems to have regained its lost sheen.

Additionally, there is financial benefit too. The attack sent into panic mode the global financial markets, with investors scouting for a safe place to invest. Despite the US incurring a deficit of $3.1 trillion in 2020, the largest in the history, demand for the US treasury notes and bonds are on the rise. Higher bond prices generate reduced interest rates, which was unexpected in the present inflationary and tapering climate. With the start of war in Ukraine, yield on 10-year Treasury note and 30-year Treasury bond fell by 11 and 7 basis points, respectively.

Price of crude oil prices rose over $120 per barrel, and that is good news for the ‘high-cost’ US based shale gas and oil businesses. Some of these companies incurred huge losses at the time of COVID-19, when crude oil prices tanked, and a defiant Russia continued supplying oil at a cheaper rate than what was suggested by the OPEC. Now with sanctions in place and Russian gas supply to Germany, France and other parts of Europe getting affected, it means ‘good time’ for the US oil business. Indirectly, it is also going to encourage energy diversification (green energy) and infrastructure investment innovation, which the Biden administration had previously strived to achieve against a reluctant Congress.

The greater demand for military hardware and modern warfare support is likely to propel demand for the US military and technology firms. US has already sent Patriot surface-to-air missile system to Poland. Germany has ordered for fighter jets from the US. According to a report titled, “The case for EU defence,” published by the Center for American Progress, “Europe lacks the critical capabilities for modern warfare, including so-called enabling capabilities, such as air-refuelling to support fighter jets, transport aircraft to move troops to the fight, and the high-end reconnaissance and surveillance drones essential for modern combat.” It is no surprise why the NATO rejected Ukrainian calls for a no-fly zone. Ukraine is now asking for fighter jets and air defence system. In a way, the US is poised for an economic boom, like what happened during the aftermath of World War II.

On the other hand, the Ukrainian refugee inflow (2 million and more), and a higher military and energy costs, will significantly strain public finances of the European countries. The European Central Bank (ECB) will have to halt any future interest rate hike program. This at a time, when inflationary pressure is high, and many economies in Europe are suffering from post Covid-19 syndrome. It may lead to stagflation (combination of a higher inflation and unemployment rates) in EU, like the world witnessed post Yom Kippur war of 1973. In 1973, OPEC imposed an embargo against the US and Europe, as these economies was supporting Israel in the war against Egypt. This embargo caused the price of crude oil to jump from $ 3 per barrel in 1973 to $ 12 by 1974.

A sanction on Russia, in particular access to SWIFT payments system and suspending VISA and Mastercard operation, may backfire. Russia is also a large economy, with real GDP similar to that of Germany. However, Russia has a much larger population (145 million) with a lower median age (38 years)in comparison to the EU (44 years). The young demography will continue to aid Russia complementing its working and military population. On the contrary, Europe’s ageing population is likely to increase further in the future. To maintain a stable population, 2.1 children should be born to each woman in an economy, assuming an average death rate applicable to the world’s population. In contrast, the figures for some Eurozone economies are much lower: 1.38 for Greece, 1.39 for Spain, 1.41 for Italy and 1.94 for the UK. For Spain and Greece, the over-65-year population will increase from around 17 per cent now to 25 per cent by 2030. The bottomline: Europe has fewer younger people to work, to pay for the expensive welfare programme and manage a rising budgetary deficit. A flexible labour immigration clause is expected to resolve issues related to the dearth of a young skilled labour force in EU. But that is not the case. The brain drain from developing countries such as India and China has helped fuel economic growth in the US, but not in Europe. Sanctions affecting Russia may punish their EU counterparts too. (IPA Service)

Nilanjan Banik is a Professor at Mahindra University, Hyderabad.

Guido Cozzi is a Professor at University of St. Gallen, Switzerland.

Russia-Ukraine War: India In Danger Of Being On The Wrong Side
Posting....