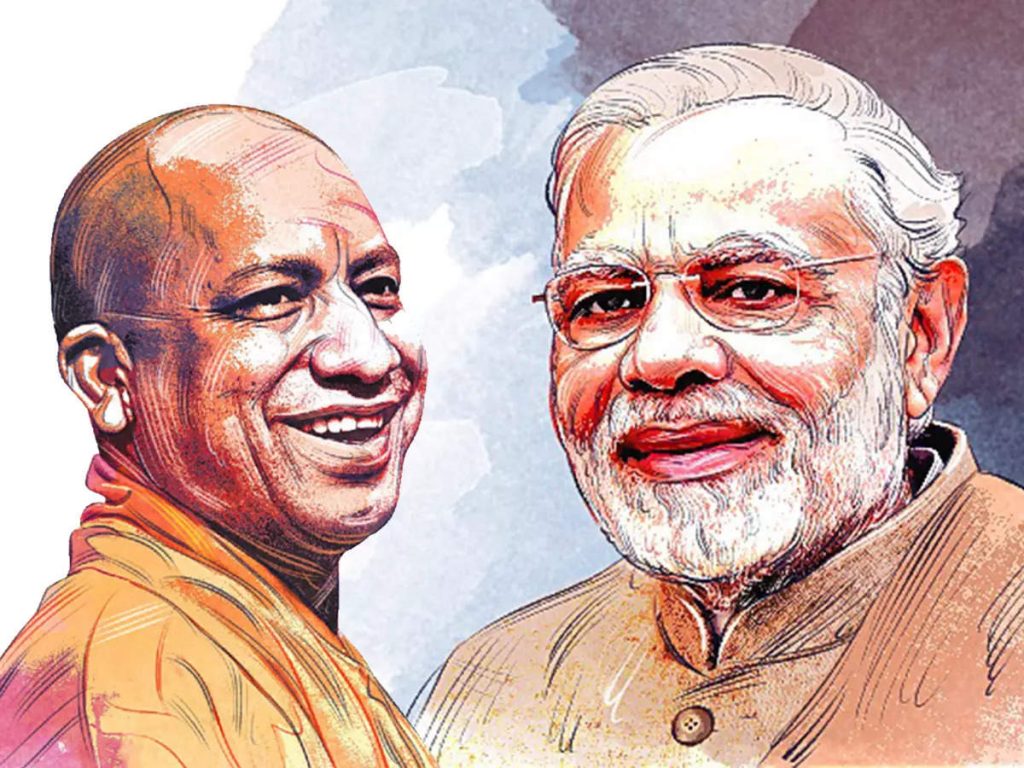 My roadshow versus your roadshow. The last time AAP leader Arvind Kejriwal took on Narendra Modi the ‘azaan’ sounded and Kejriwal paused. Then, Varanasi voted Modi to make him Prime Minister. Kejriwal didn’t have a prayer to stop him. In 2019, nobody had a prayer. Today, another nearly five years later, AAP is riding high and AAP thinks Kejriwal has got more than a prayer to beat Modi at his game.

That is not to say that Modi is not on a high. The BJP’s 4/5 report card—Uttar Pradesh, Goa, Uttarakhand and Manipur—depicts a no less sterling performance from Prime Minister Narendra Modi. His stock has soared to an all-time high since after the “bodies are floating in the Ganga” sing-song. Now talk is swirling that after UP 2022, India 2024 will give Modi and the BJP a third straight term.

That is, if the AAP (and the rest of the Opposition) allows it. AAP is waving the ‘jhaadu’ and Raghav Chadha talked of the “vacuum-cleaner” and “AAP’s national transformation.” Two days later, Modi headed for Gujarat, his home-state and the place from where he made his entry into national politics. And the Modi roadshows, one in Ahmedabad and the other in Gandhinagar, have set the tone and tenor for Gujarat 2022.

Arvind Kejriwal, on his part, followed up AAP’s stunning 92-seat Punjab sweep with a roadshow in Amritsar. Party workers waved the tricolour, and the AAP flag. Kejriwal said “I love you Punjab” and thanked the “people of Punjab.” Come 2024, they will vote for Kejriwal and the AAP while the BJP will find it uphill in Bhagat Singh-country as it always has.

It’s very unlikely there will be a Modi roadshow in Punjab. Not today, tomorrow or a month later. Not even after a year, two years, or three years. But expect a Kejriwal roadshow in Gujarat. Definitely more than one as we get closer and closer to Gujarat 2022. Modi, the accomplished politician that he is, must have already factored this into his Gujarat calculations.

The Bharatiya Janata Party will be making a mistake if it takes AAP’s Gujarat challenge lightly. AAP did not wait for the Punjab victory to sink in before it announced its plans for Gujarat. By now, the party’s backroom geniuses must be at the drawing board sharpening pens and shaping AAP’s Gujarat 2022 campaign.

Meanwhile, the campaign on Social Media has started. March 11, the day after AAP was handed Punjab lock-stock-and-barrel, the party handle tweeted—, ‘After Delhi and Punjab, now Gujarat wants AAP.’ ‘Dream on’ must have been the BJP’s first thought, but not the last.

The AAP was planning to take out a ‘Tiranga Yatra’ in Gujarat. Also, knowing that BJP rides high on nationalism, AAP has adopted Shaheed Bhagat Singh as its own. AAP’s ‘Tiranga Yatra’ will travel through all the tehsils and panchayats of Gandhi’s home-state.  This, even as AAP mounts a membership drive in states and UTs down South including in Andaman & Nicobar and Lakshadweep. Kejriwal wants the aam aadmi across the length and breadth to vote him in and Modi out.

On the Gujarat blitz, Kejriwal will be accompanied by Punjab CM-designate Bhagwant Mann. AAP’s Punjab roadshows were ‘mega’ affairs. So were plans for the inauguration of the AAP Government of Punjab. Arvind Kejriwal knows how Modi capitalized using event management, how Modi transformed every occasion into an event—a self-aggrandizement larger than life. It’s a Modi talent, but Arvind Kejriwal is no less a publicist. How many of us have forgotten how Kejriwal bedded down for the night on the main road in front of Rail Bhavan in New Delhi?

Meanwhile, flowers were selling like hotcakes in Gujarat and Punjab over the weekend. Flowers and slogans rent the air. In Gujarat, it was surfeit of ‘mogras’ and cries of “Jai Shri Ram”. In Punjab, Kejriwal began his roadshow from the Golden Temple. Modi does not have to swear he’s a Ram bhakt. Kejriwal is a Hanuman bhakt! And anybody who is Hanuman-bhakt does not need to prove his loyalty to Ram.

And the “bhakts” are stringing Kejriwal high for “what he is.” The day after the Punjab results, Kejriwal became ‘Kejruddin’ for many on Social Media. In the days to come expect ‘Kejruddin’ to trend. Also, expect Gujarat 2022 to be the fiercest to date. The Hindu-Muslim divide will sharpen; don’t forget, the ‘Hijab row’ is hanging there in the divide!

AAP doesn’t want to lose momentum from the Punjab victory, and the BJP does not want its momentum upended by an eight-year-old upstart. For Modi, a defeat in Gujarat 2022 will spell a setback going into the 2024 roadshow. For Kejriwal, if AAP scores three straight ‘AAA’, it’ll be 60:40 in his favour, different from the 80:20 that Yogi banked on. (IPA Service)