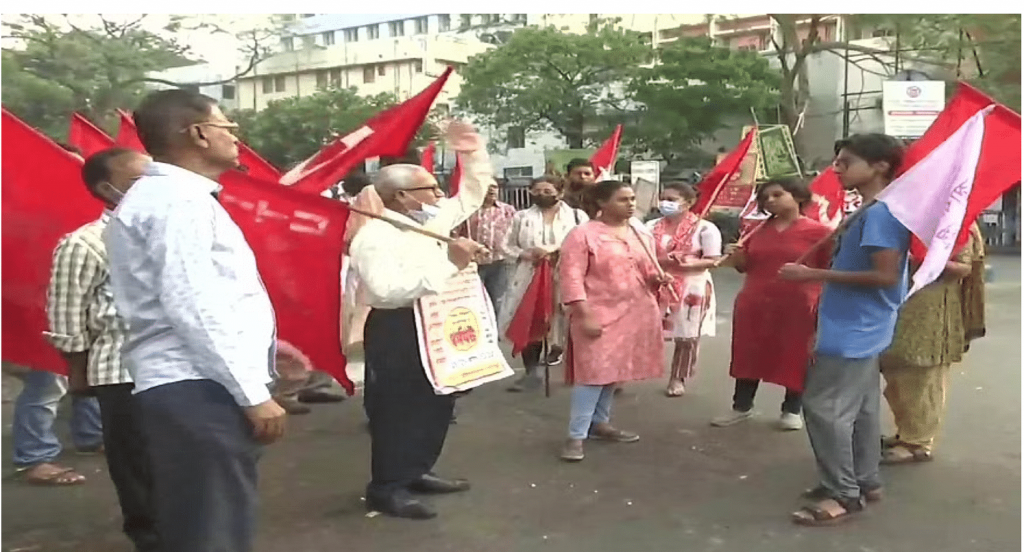 Two-day workers strike hit normalcy in many parts across India on March 28-29 that were reverberated with shouts of the striking workers demanding scraping of anti-worker policies of the Modi government. Even many government employees participated despite the threat of Essential Services management Act (ESMA) and the orders against their participating in the strike by judiciary and governments, and also many workers affiliated with Bharatiya Mazdoor Sangh (BMS) that being pro-government central trade union did not participate in the general strike. The echo of the strike even reached in front of the Parliament of India in the form of protest by several political parties in opposition, and even suspension of business notice was given in Rajya Sabha to discuss the two-day nationwide strike called “Bharat Bandh”. All these indicate that the echo of the demands will be heard for a long time to come as the struggle enters next stage.

During these two days an estimated over 20 crore of workers participated in the strike, which is big enough a number for any government to initiate talks with their representative trade unions. The majority of workers were affiliated with 10 central trade unions (CTUs) – INTUC, AITUC, HMS, CITU, AIUTUC, TUCC, SEWA, AICCTU, LPF and UTUC. The call of the strike was give by the joint platform of CTUs and Sectoral Federations and Associations. Employees and workers from several public transport, banking, and electricity services have also participated in the strike and/or demonstration across the country.

Goa, Karnataka, Maharashtra, Chhattisgarh, Punjab, Bihar, Rajasthan, West Bengal, Meghalaya and Arunachal Pradesh witnessed strongest protest and strike with many of their areas underwent Bharat Bandh like situation. Odisha, Jharkhand, Assam, Telangana, Tamil Nadu, Kerala, and Puducherry were also among the worst affected states. Security workers going on strike in Sikkim is a special phenomenon that cannot be ignored. Industrial areas in Delhi, Himachal Pradesh, Gujarat and Jammu & Kashmir were also severely impacted by the strike. Roadways and electricity workers in Haryana and Chandigarh have already decided to participate in the strike even under the threat of ESMA, however, in the last hour, electricity workers across all the states are reported to have joined the strike. The workers from both organized and unorganized sectors went on strike which included all sector – even workers of various government schemes, domestic workers, hawkers, beedi workers, construction workers and so on.

Transport services were affected in West Bengal and Haryana, while railways operation were reported partially hit in West Bengal. Metro service in Chennai was also hit because MTC did not operate. All industrial areas in the country witnessed workers agitation. Banking and insurance sector was also affected by the general strike. All India Bank Employees’ Association (AIBEA) has said that the strike has halted banking transactions worth at least Rs 18,000 crore, and about 20 lakh cheques could not be cleared.

Congress MP Shaktisinh Gohil gave suspension of Business notice on March 29 in Rajya Sabha to discuss the two-day nationwide strike against government policies that are affecting farmers, workers and people. On March 28 Political parties – Congress, CPI(M), CPI, DMK, and TRS – also organized a march from Gandhi statue to Vijay Chowk and protested in support of the workers’ demand.

The success of the strike must be viewed in the backdrop of orders passed against government employees. For example, Kerala High Court had passed an order that government staff “can’t take part in national strike” and asked the state to take appropriate action. Not only in Kerala, but also in West Bengal, the government has asked their staff to report to duty. Even in Tamil Nadu, the government warned against the strike but the majority of transport workers went on strike. In some of the states employees joined the workers strike even on the second day ie on May 29, such as in Sikkim and Arunachal Pradesh. Public transport services were even thrown out of gear in states like West Bengal, Kerala, and Tamil Nadu. In brief, in spite of orders and advisories by judiciary and governments, workers participated in the strike, which shows the anger among the workers against the Modi government policies. Even larger number of people from working class participated in the second day of the strike.

‘Save People, Save Nation’ is the joint call of the CTUs given against the alleged “anti-worker, anti-farmer, anti-people, and anti-national policies” of the centre. Their 12-point charter of demand includes scrapping of the four controversial labour codes, stop privatisation in any form and scrap the National Monetisation Policy (NMP), regularization of contract workers, and social security to all workers and households.

Given the situation on the ground which can further embitter the industrial relations in the country, Modi government must initiate talks with the agitating working class to find a solution as soon an possible. (IPA Service)