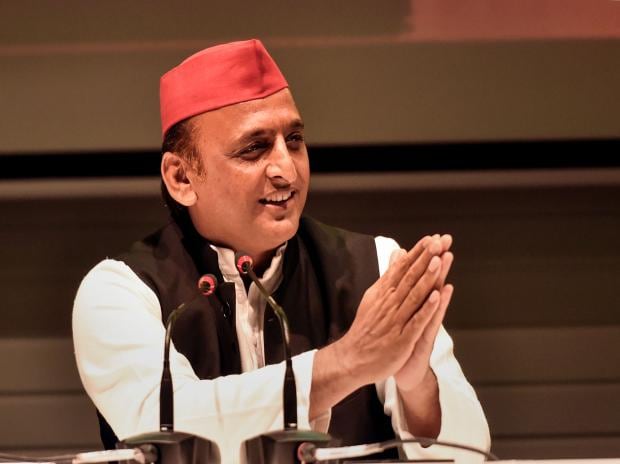 Akhilesh Yadav needs no introduction. But in the Uttar Pradesh Vidhan Sabha, he is a newcomer, just like Yogi Adityanath was in 2017. Yogi remained a non-member of the assembly the entire five years he was CM the first time, just like Akhilesh Yadav when he was Chief Minister from 2012-2017.

The similarity ends there. Now that Akhilesh Yadav is leader of the Opposition in the UP Assembly, shouldn’t he ask that the record be set straight as far as the name of the Chief Minister of Uttar Pradesh, India’s largest state by population is concerned?

It would be a good start for Akhilesh Yadav to compel Yogi Adityanath to step out of his saffron camouflage. What is the Chief Minister’s name in the Vidhan Sabha records, on his aadhar card, PAN, passport, has Yogi Adityanath, legally, officially, following the correct procedure, changed his name in official records? The people of the state have the right to know.

Akhilesh Yadav should begin his maiden innings in the UP Assembly, as leader of the Opposition, on an aggressive note. He should question the Yogi Adityanath government’s every move. The monk, who in his second term is an old monk, should be questioned on everything, from abattoirs to encounter-killings and the Romeo Squad.

Chief Minister Yogi Adityanath won a 2nd-term majority on the strength of free rations. The first thing he did after returning to power was to extend the free rations scheme for another three months. Akhilesh Yadav should corner the CM on this issue, ask him how’s the state government financing the free rations, whose money is it that is being used to foster the BJP’s electoral fortunes, doesn’t it tantamount to bribing the electorate?

Part of the Yogi’s poll winning strategy was to corner the Samajwadi Party on law & order. The bulldozer raj continues into the Yogi’s second term. There’s no let-up even in the interregnum of “no man’s government.” The Yogi had overseen a slew of encounter-killings of alleged gangsters in his first term. The leader of the Opposition should demand a White Paper on the encounter killings.

The point being made is, the Yogi 1.0 government had a brute majority, which it took advantage of. There was no Opposition to question its moves or its motives. Yogi 2.0 faces a strong Opposition. Leader of Opposition Akhilesh Yadav should make sure that the Opposition takes the government to the cleaners every time it crosses its limits.

The Opposition should be vigilant. The Opposition should set up its own helplines in every district for the people of the state to call in case government functionaries fail to respond to SOS. The Samajwadi Party for most of the Yogi 1.0 played dead and Akhilesh Yadav was nowhere to be seen. He wasn’t involved with the state at all.

This time he should be seen to be involved, more so after taking over as leader of the Opposition and quitting his seat in the Lok Sabha. Akhilesh Yadav shouldn’t forget that he has so far lost four straight elections, and yet he has been given a lease on life by a big section of the electorate. He shouldn’t fail them and nor should he squander the opportunity given to him for redemption.

The BJP’s goal is clear to see—2024. And Modi and Shah will be banking on Chief Minister Yogi Adityanath to deliver 70-plus Lok Sabha seats from UP’s 80 for Modi to be crowned Prime Minister a third time in a row. And the BJP will go for broke to ensure that Modi is not thwarted by the fault of any of the BJP state governments including that of Yogi Adityanath.

Leader of Opposition in the Uttar Pradesh assembly Akhilesh Yadav should use all the resources he can marshal to beat the Yogi Adityanath Government in its own game. The issues on which the Samajwadi Party fought the 2022 elections shouldn’t be discarded and dumped by the wayside, the Samajwadi party should pursue them with renewed vigour, and relentlessly.

Don’t forget those issues took SP’s vote share from 22 percent to 32 percent, its best ever showing to date; and its seat-share went up from 47 in 2017, to 111 in 2022. The BJP may have won, but the SP’s achievement is that it’s the only party other than the BJP still standing. The “once mighty BSP” is nowhere to be seen.

Akhilesh Yadav should continue with his poll-strategy outside the assembly, which is to strengthen the SP’s standing among the people of the state; by trying his best to ensure that the Samajwadi Party loses its “gundon ka party” image among the electorate. The grammar of the state’s politics no longer tolerates violent behaviour. The SP has enough time till 2024 to change for the better.

That said, inside the assembly, the Opposition led by Akhilesh Yadav should present a strong front, and keep the government on its toes. Be assured Chief Minister Yogi Adityanath will not give up his strong-man, muscular style of governance. But there is a very thin line that separates the ‘sadak ka gunda’ from the ‘state ka gunda’. Asking Chief Minister Yogi Adityanath to spell out his real name is a good enough beginning to rattle him, but to get him to lose his tough-man posturing will be the real deal. (IPA Service)