Turkey’s Zero Problems With Neighbours Mean A Lot Of Problems 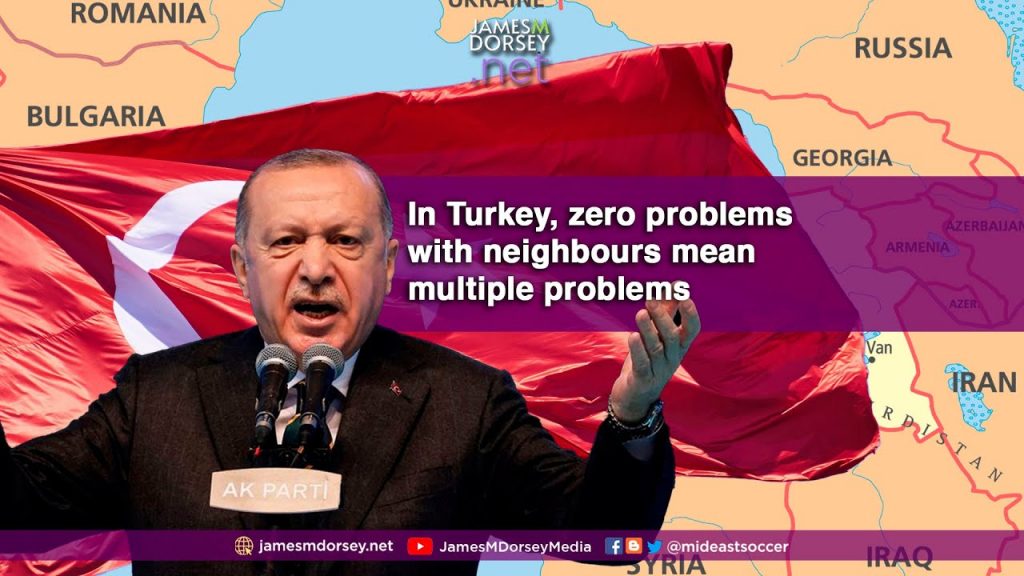 Turkey’s reconciliation with Saudi Arabia, the United Arab Emirates, and Israel is doing little to return the country to its ‘zero problems with our neighbours’ policy declared more than a decade ago.

To be sure, albeit fragile, Turkey has smoothed feathers with the Gulf states ruffled when President Recep Tayyip Erdogan effectively abandoned the policy by supporting the 2011 Arab popular revolts and the Muslim Brotherhood, coming to Qatar’s aid during the 3.5-year-long UAE-Saudi-led diplomatic and economic boycott of the Gulf state, and taking Saudi Arabia to task for the 2018 killing of journalist Jamal Khashoggi in the kingdom’s Istanbul consulate.

Most recently, Turkey re-established diplomatic relations with Israel after more than a decade of tensions that erupted in 2010 when Israeli commandos killed 10 Turkish activists aboard a Turkish aid vessel, the Mavi Marmara, attempting to break the Israeli maritime blockade of Gaza.

Yet, with fears mounting of an escalation of the violence on the Israeli-occupied West Bank, the unresolved Palestinian issue constitutes a ticking time bomb in relations between Israel and Turkey. Turkey has insisted that restoring ties with Israel does not mean it has abandoned its support for the Palestinians. Turkey’s problem is that it has improved relations with regional powers, none of which borders Turkey.

By contrast, relations with four of its eight neighbours with which it shares land borders – Iraq, Syria, the Kurds, and Greece – are on a downward spiral, with the spectre of armed conflict hanging in the air.At the same time, the Russian invasion of Ukraine has turned the Black Sea into a war zone. Similarly, a potential Turkish offensive in northern Syria would create another war zone in which Turkey risks fighting Kurdish rebels, Syrian troops, and Iranian-backed militias.

So far, Turkey has insisted on its right to intervene militarily yet again in northern Syria but has held off launching a new offensive because of Russian and Iranian opposition. Instead, Turkey is exploring under Russian auspices a modus vivendi with Syrian President Bashar al-Assad, whose political demise Erdogan has demanded since the beginning of the Syrian civil war 11 years ago.

However, reconciliation on terms acceptable to Erdogan may amount to pulling a rabbit out of a hat, given the wide gap in Turkish and Syrian approaches towards control of Kurdish and other rebel groups in northern Syria. Add to Turkey’s strained relations with its neighbours a so far carefully managed dispute between Turkey and NATO over Swedish and Finnish membership of the trans-Atlantic alliance that threatens already troubled relations with the United States.

Turkey is demanding the extradition by the Nordic states of scores of ethnic Kurds and alleged followers of exiled cleric Fethullah Gulen in exchange for ratification of Swedish and Finnish membership by the Turkish parliament. Turkey holds Gulen responsible for a failed 2016 military coup. Rather than easing tension, Erdogan and his associates have been fuelling the fires.

In the latest forthright statement, Erdogan’s interior minister, Suleyman Soylu, sounded like he was echoing Iran, that for decades has sought to force a withdrawal of the United States from the Middle East. Soylu charged that Turkey’s pro-Kurdish People’s Democracy Party (HDP), whose leader is behind bars on terrorism charges, along with the outlawed Kurdish Workers Party (PKK) that has been waging a four decades-long low intensity war in the predominantly Kurdish southeast of the country, are creatures of the United States.

This week, the PKK and the Turkish defence ministry differed on the reason for the loss of a Turkish Sikorsky helicopter in Iraqi Kurdistan, where the Turkish military has been targeting Kurdish rebel bases. The Turkish operations have strained relations with the Iraqi government in Baghdad.

The PKK claimed it had downed the helicopter in retaliation for the killing by Turkey of one of its commanders, while Turkey asserted that it had crashed ‘due to technical issues.’ To complicate things, Turkey, Iran, and Israel are fighting a low-level covert war in northern Iraq over the backs of Iraqi Kurds.

“We do not need the United States. We do not need a Europe that wants us divided and is indifferent to our religion, culture, and beliefs…. As we dismantle the terrorist organization, you should know that we also want to wipe out the USA from here,” Soylu said, referring to the PKK and its offshoots in Syria as well as the US military presence in the war-torn country. It was unclear whether Soylu was referring to the European Union as a whole or just Sweden and Finland which, according to Turkey, are stalling on agreements made on the eve of NATO’s acceptance of the Nordic states’ membership application.

In a similar vein, Erdogan last week lashed out at fellow NATO member Greece after Turkey accused Greece of harassing Turkish jets on a reconnaissance mission with a Russian-made S-300 air defence system.“Hey Greece, take a look at history. If you go further, you will pay a heavy price,” Erdogan said, apparently referring to the ethnic cleansing in 1923 when Greeks were forced to leave Turkey and Turks were expelled from Greece in what is euphemistically described as a “population exchange.”

Those in Turkey willing to risk the wrath of an increasingly autocratic Mr. Erdogan joke that, if he had been president during World War Two, Turkey would be fighting the Germans, British, and Russians all at the same time. (IPA Service)