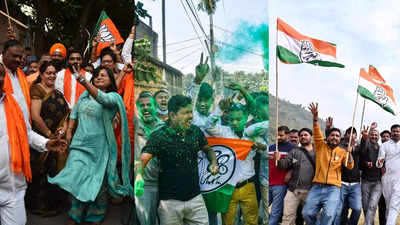 KOLKATA: In West Bengal, the ruling Trinamool Congress (TMC) made a flying start   towards winning the civic polls: blowing away all opposition at Siliguri, Asansol, Chandannagore and Bidhannagar (Salt Lake City).  In the first phase of polling, out of   226 urban wards in contention, the TMC won 198, some candidates winning by record margins.

All opposition parties — the Bharatiya Janata Party (BJP), Left Front constituents led by the CPI(M) and the Indian National Congress (INC) — cut a sorry figure.  For the record, the BJP won 12 wards, the LF 7 and Congress, 5 only. With the fate of 108 more civic bodies to be settled on February 27, the next election day, the opposition even as a combined force   currently faces an existential crisis.

Preliminary stats showed the TMC had cornered 61% of the aggregate vote in this round and the BJP only 14.6%.  Officials said Left parties, winning 16.12% had replaced the BJP as the runner-up to the TMC, a further indignity for the saffron party in 2022. It had   won 40% of the popular votes in the 2019 Lok Sabha polls.

Among major setbacks for the opposition, the defeat of Siliguri Mayor and former CPI(M) Minister Ashok Bhattacharya at Siliguri attracted much attention. Despite coming to power in 2011, the TMC had never won here in the past. Also notable was the embarrassing loss suffered by BJP MLA and local leader Mr. Sankar Ghosh. In a largely four-cornered contest, he came in fourth, adding insult to the BJP’s injuries.

In winning 37 out of 47 wards in Siliguri town, the TMC decisively buried the BJP’s claim that it had established over the years a fairly strong political base in North Bengal. Former State Minister and TMC leader in North Bengal Gautam Deb who had spearheaded the TMC’s campaign thanked the people for their support. The main reason why the TMC won he said, was its sustained popular welfare programmes.

His explanation was followed by   other TMC leaders all over the state, as they took questions from mediapersons. Mr, Deb was tipped as the next Mayor of Siliguri town. Chief Minister Mamata Banerjee congratulated him when he contacted her and urged upon him to work harder for the people.

Ms Banerjee also urged upon the winning councilors to do their best for the people now that voters once more reposed their faith in the TMC. Their responsibilities had increased, she said, adding that they should not arrange victory processions etc which inconvenience the people.

In contrast, BJP supporters and workers demonstrated last evening on National highway 34 at Ranaghat in South Bengal, outside the EC (Election Commission) office in Kolkata and other parts of the state, protesting what they alleged to be ‘a murder of democracy in the name of elections’. Led by state party president Sukanta Majumdar, Mr Dilip Ghosh and others, defeated BJP candidates complained against the continuing terror campaign carried out by the TMC cadre throughout the campaign and even on polling day, citing repeated instances of various violations and excesses as shown in the electronic media as examples.

The opposition could neither put up their candidates, campaign publicly or stop local TMC leaders and their goons from terrorising common voters and rigging. It had become meaningless, said opposition leaders, to contest elections under these conditions in the state.  On Feb 27, as polling would be held mostly in the rural. semi urban areas and centres, with a partisan state police force on routine duty, they feared that even worse could be in store for those opposing the TMC.

Visibly depressed over the results, CPI(M) leader Mr. Ashok   Bhattacharya told newsmen that the party would have to analyse what went wrong at Siliguri and why   the people voted so massively for the TMC. In terms of performance. the left-ruled civic body, it was common knowledge, had really worked hard for the people during its tenure.

However, it had been a consistent campaign of the Left that the state Government never co-operated with the Siliguri civic body, only because it was being administered by the opposition. Similar allegations were made by BJP and Congress Councillors in other civic bodies, too. The major allegation was that they could not carry out their duties because the state Government never helped them financially or otherwise. ‘The TMC wanted to tell the world that only people enjoying their support would be allowed to operate, not otherwise’, was the main opposition complaint.  This was the major reason why Siliguri, which had never voted for the TMC for over two decades, was finally lost to the TMC.

Long before the 2022 civic polls began, the pre-election process had been mired in bitter controversy. The opposition parties had pressed for the deployment of para military forces on polling day. The state administration and the Election Commission turned down the demand. Officials rejected allegations that the state police usually acted in a partisan manner.

The opposition repeatedly moved the Calcutta High Court on various issues relating to the polls without securing much relief. The HC warned the EC that in case of any major failures in maintaining law and order, it would be held accountable. However, as polling ended, EC officials and senior police officials claimed that barring a few incidents the polling had been largely peaceful All complaints had been checked, they said.

Initial stats showed that   the figures for municipalities/civic bodies at Asansol, Bidhannangr and Chandannagar were dismal for the opposition. At Asansol, the TMC won 91 out of 106 wards, the BJP 7 and the LF 1 only. At Bishannagar the trend remained the same, the TMC bagging 39 out of 41 wards and at Chandannagar, 31 out of 33 wards!  Another point of interest was that both at Bidhannagar and Chandannagar, the BJP won fewer votes than the LF, its share at the former dropping to a mere 8%!

In contrast Ms Banerjee and other TMC leaders thanked and congratulated people for their support and appealed to them to turn up in larger number on Feb 27 to vote even more supportively for the TMC.

There was general agreement that the level of violence had not been remarkable and hardly any major incidents had occurred.  Except a case of firing at Asansol resulting in a few injuries, there had been no   outbreak of major violence.

However, there had been a series of minor incidents throughout the day in many places. Among a few sordid specialities seen, were a fight between two female candidates at one centre, frequent attempts made by dubious ‘outsiders’ to get in line and vote illegally, crowds of mainly TMC supporters grouped close to polling booths intimidating common votes and the few opposition activists who tried to do their best being always outnumbered! The state police hardly exerted itself, policemen mostly remaining idle spectators.

As shown on TV, some intrepid newsmen actually identified and chased a few anti socials who apparently had been sent by the TMC local units at Bidhannagar and Asansol. At Bidhannagar, a female reporter working for a major channel was assaulted by TMC supporters for her pains.  By and large and pro- TMC Kolkata-based media played down such incidents. The printed media too followed suit the morning after.  There was also general criticism of the apparently passive role played by the police in all four urban centres, as generally TMC supporters and leaders had their way in most disputes.

Nevertheless, the badly divided, understaffed and palpably demoralised opposition put up a poor show in the face of the strong TMC challenge on the ground. Senior TMC leaders/Ministers like Partha Chatterjee, Jyotipriya Mullick and Firhad Hakim brushed aside most opposition claims. The people had rejected the opposition they said, adding that some people were only good at making excuses for their miserable performance and massive political defeat. (IPA Service)

Drug Pollution In Rivers Is The Next Danger
Posting....