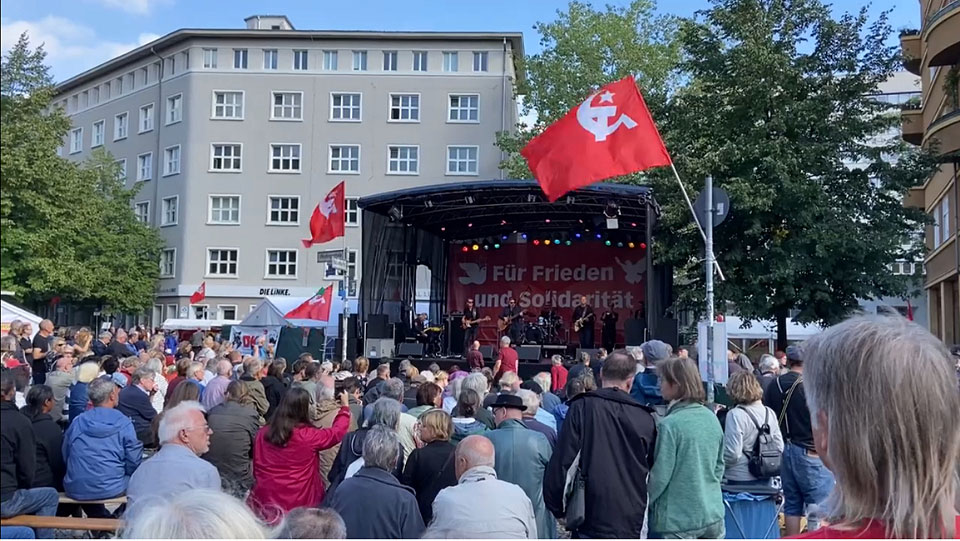 BERLIN: Some readers might expect – at last – a jolly, happy bulletin from Berlin. Germany, fourth richest power in the world, the strongest in Europe, seems to have overcome at least for now the ravages of the pandemic. Except in public transportation and medical institutions, face masks have all but disappeared. There are more jobs again – at least in fast-food or discount shops, in restaurants and hotels or for computer experts. Subways, buses, and streetcars usually run on time – and sometimes even the inter-city trains.

But all is not well, and anxiety is widespread, for living costs have soared. Worst of all – heating and cooking gas, and electricity. But also groceries: meat and sausage, many fruits and vegetables, bakery products, even margarine; the many, many food pantries for the hungry, not a few of them from the middle class, can no longer cope. Most frightening of all – mounting rent costs for apartments, in Germany the homes of a majority.

Behind this distress – and for many like me most painful – is the Ukrainian war. During the many wars, I have followed in the news I have learned to be highly skeptical about all news reports. I have seen so many lies and clever distortions that I know enough to believe neither side. But, distorted or not, every report, every picture of death and destruction wrenches at my heart. Though I was always lucky enough to escape it, I hate war. And especially heart-wrenching for me is that Vladimir Putin, despite my hopes and expectations, took that fateful step on February 24th and sent troops, tanks, and planes across the Ukrainian border!

During the many wars fought in my lifetime, all the way back to Spain, Ethiopia, and World War Two, it was usually easy to discern who was the perpetrator, the aggressor. And this time the media immediately and almost unanimously decided which devil to demonize for the hoi-polloi – occasionally with tail and horns added on. Since other old Satans are dead and gone, Putin could easily be consigned to an even lower circle in the Inferno than Xi Jinping.

The liberal, “center-left” three-party coalition now governing Germany adopted this interpretation immediately and unreservedly; it was Putin’s army which crossed that borderline and is now bombing and shelling or, allegedly, even worse.

I could not argue with the facts. But neither could I ignore worrisome questions: Where was the indignation, where were the flags, the welcome mats for refugees when NATO or its surrogates putsched, invaded, bombed, shelled, or otherwise “democratized” Guatemala, Iraq, Somalia, Haiti, Indonesia, Libya, and a dozen or so others? How many wept with the mothers of Hanoi, or Santiago, Baghdad, or Kabul?

There are so many uncomfortable questions. Yes, Russia has its oligarchs – too damned many in my view. And delusions of grandeur may be found in Putin’s court-like appearances, possibly overmuch Russian national pride. But with Russia facing an American armaments build-up thirteen times as big as its own, and seventeen times as big when NATO is added in, and with its heartland almost totally surrounded and cut off from warm water shipping in the Black Sea if Georgia and above all Ukraine are U.S.-dominated – it was undeniably the underdog. Yes, underdogs can also bite sharply. But they remain underdogs – and on the defensive, primarily against products of Northrop-Grumman, Raytheon, Boeing – and KruppThyssen; but also the unimpeded spread of Bayer, Amazon, Facebook, Twitter, Aldi, Coke, and Burger King – and the Murdocks and Springers.

Whose voices have been loudest in confronting the evil on the Moskva? In the U.S. it would be mistaken to say that the GOP and the Democrats are exactly the same. They compete, currently more than ever. But for Ukraine, they are flagbearers in the same crusade. It is similar in Germany with the current three-party ruling coalition, which is known as “the Traffic-Light”, for each party here has a campaign color. Green of course is for the Greens, red, not so naturally, for the Social Democrats.

Yellow (in German it’s not negative) is the chosen color of the Free Democrats. The basic program of this “Let ‘em eat cake” party is no tax increases for the big-biz wealthy, the least possible “alms” for single parents, seniors, the unpaid and jobless – and as many weapons as possible for Zelensky (or almost anyone as long as the Euros keep tinkling – or rustling!).

As for the Greens, once viewed as leftist radicals, they have long led the chase against the Russian devils. Loudest among the exorcists is Annalena Baerbock, Green party co-chair and Minister of Foreign Affairs, whose life mission, long seen as wrecking Russia, is now best accomplished by backing Zelensky with all it takes. As she stated: “I will put Ukraine first no matter what my German voters think!” This did not go down well with some of her German voters, but friendly media quickly (if falsely) blamed the Russians for misquoting the video and are keeping her popularity undamaged. Yes, the Greens form the vanguard in backing “rules-based order” with Zelensky and NATO.

The Social Democrats of Chancellor Scholz are more complicated. A few SPD leaders can still hear and maybe heed the demands of labor union constituents, whose votes they urgently hope to win back. The hardships caused by the boycott of Russian oil imports – and by profiteers – with the soaring prices on nearly everything, threaten to motivate growing protests, one already very visibly with several thousand protesters in Leipzig on September 5th, yesterday in Chemnitz (called Karl Marx Stadt in GDR days.) Not all too far away, in Prague, an angry crowd reached five, maybe even six-digit size.

This makes even stolid Chancellor Olaf Scholz, a Social Democrat, a bit shaky. Despite his coalition partners he has been accused of dragging his feet at meeting every new Zelensky demand for big tanks and more and heavier weaponry and for saying “We mustn’t move even faster than the USA and other NATO countries.”

On September 14 Scholz had an unusual 90-minute telephone exchange with Putin, in which he “urged a diplomatic resolution of the Russian war in Ukraine as soon as possible, based on a cease fire, a full withdrawal of Russian troops and respect for the territorial integrity and sovereignty of Ukraine.” We had “very different views,” he said, but there was “definite movement” and “always a friendly tone.” Even the word “diplomatic” was almost unique – instead of “victory.”

But his partners are actively reining in any undesirable deviation. From the correct political line. Many are now scrambling to pass relief measures (but constrained by the Free-Democrat-yellow Finance Minister) to demonstrate their concern for citizens in Germany hit hard by sanctions against Russia – and thus discourage protests and demonstrations for peace.

As for the two “Christian” sister parties, officially in opposition, they too bark loudly for more weapons for Kiev and a more martial war spirit and attack their unsteady rivals for doing a bit too much for families with children, the jobless and underpaid while they wait eagerly for the Traffic Light to fizzle out so they can resume rule of the highway.

The Alternative for Germany (AfD), furthest right in the Bundestag, takes the perhaps odd position of supporting Putin, embarrassingly for some on the left. The AfD always supports anything against the European Union, also a key Putin target because of its sanctions policy.

But it wants to build up the German army with a big increase in armaments, re-introduce the draft and start up a compulsory year of semi-military service for young people, male and female, while opposing “alternative family lifestyles” and abortion. Its main line is to hate Muslims, hate all immigrants, and– more discreetly – hate Jews as well. Its pace-setters are busy planning “Day X,” a German equivalent of Jan. 6 in Washington. Their growth, generally stalled at 10-14%, is still strong in the eastern states of Thuringia and Saxony, where it leads with 26%.

For me, other voices are at least as alarming. While fully supporting NATO in Ukraine and aiming at its main goal, weakening Russia and ideally replaying the 2014 victory in Kiev’s Maidan Square in Moscow’s Red Square, they are hinting at a break with any further subservience to U.S. power.

“OK, keep on building up the military force of NATO, led by the Pentagon. But also, independently, strengthen European military power led by Germany. The €100 billion [about $98 billion] armament program advanced by Olaf Schulz – who wasn’t a bit hesitant in this matter – must be further increased; there is already a stress on aggressive weapons for attacking, for landing, for seizing and holding areas in Eastern Europe, in Africa, the Near East and now, with its navy manoeuvres, in the “Indo-Pacific” region near China. (IPA Service)

Ashok Gehlot Is Making His Position Vulnerable By Playing Not Straight
Posting....