The Queer Handling Of Demolition Drive By Municipal Corporation Of Delhi 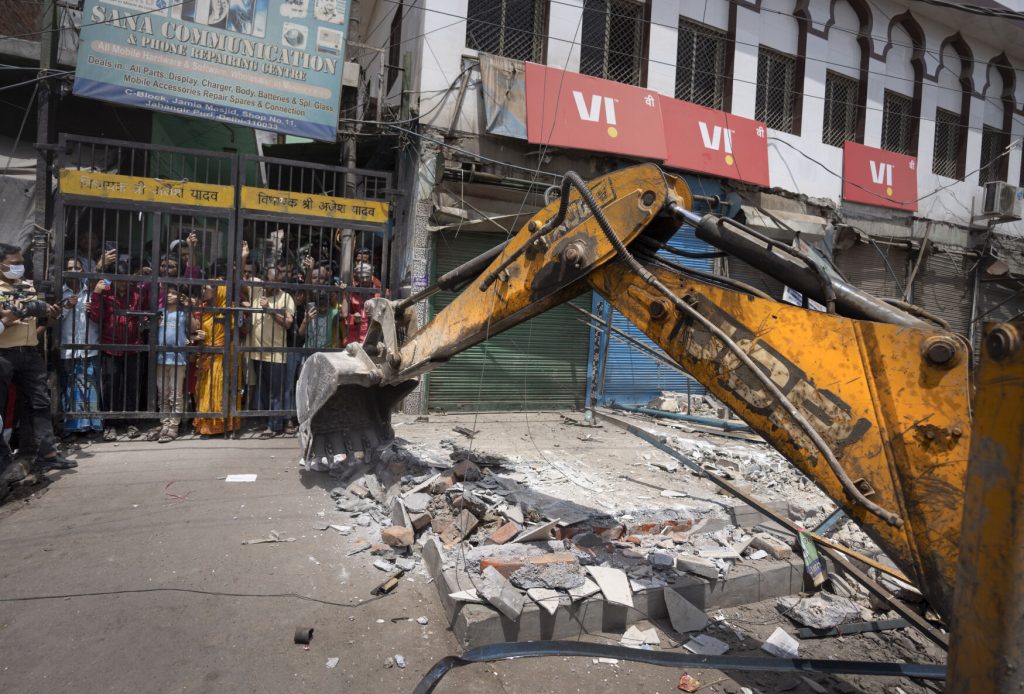 It was a setback to the narrow-minded right-wing, and victory for the liberal left, to the opposition parties, and to the anti-Modi of whom there are legions. But when the Supreme Court’s order took its own time reaching the respondents in this age of instant information, it turned out to be the defeat of the highest court, the Supreme Court of India!

The MCD’s anti-encroachment drive in the communal cauldron called Jahangirpuri, where alleged Bangladeshi and Rohingya illegals have taken up abode, should have been brought to a halt the minute the Supreme Court ordered a stay on the demolition drive following the intervention of top-notch lawyers in favour of alleged illegal aliens.

Now, the case will be heard on April 21 and it will be interesting to see on what basis the top court will give permanent relief to the alleged illegals who had allegedly taken over public roads to build shops and offices. Will the apex court be successful in finding chinks in the armour of the civic body’s seemingly legal anti-encroachment drive?

There is no denying that encroachments on public roads are illegal acts. Such activities cannot enjoy the patronage of the legislature, the executive, or the judiciary. In this case, the MCD officers on ground zero refused to halt the anti-encroachment drive and continued to raze the illegal constructions on public roads, from “Juice Corners” to “Mobile Repairs”, not even sparing the “illegal shops” in the “Jama Masjid Complex”.

Social media posts alluded to a “final showdown” between the executive and the judiciary, with the rightwing applauding Union Home Minister Amit Shah for his tough stance. The left-wing held him accountable for all things wrong in India. At 12 noon, a top television media reported the demolition of the “Jahangirpuri Jama Masjid’s gate, its porch and one of its doors.”

Rival TV channels reported this “sabse latest news”—unprecedented, according to all accounts. Some channels spoke of how a “place of worship” was put to the test at the altar of political expediency. Others spewed exultant, just managing to stop short of finding fault with the Supreme Court.

Indeed, the Supreme Court couldn’t have expected the MCD to revolt, basically bureaucrats with designations which are generally prone to buckle under pressure. It’s as if the bulldozer had bulldozed its way into their less than 56” chests. At 12:13 pm Brinda Karat, a top CPM leader, was at the spot to ensure the SC’s stay order was followed.

Karat stood in front of a bulldozer, declaring that the bulldozer was giving scant respect to the Supreme Court’s order. And, when she said this, she was quite in order. The police did not stop her from speaking her mind. But some of the locals who were distraught at the civic body’s actions were arrested for “trying to instigate and raise tempers.”

By then the lawyers of the petitioners were back in the top court, protesting, angry that the apex court’s order was not finding takers in the civic body. Union Home Minister Amit Shah’s words of a couple of days ago to the police to do the unprecedented, which should be remembered for long, appeared to be the driving force behind the MCD’s newfound courage.

At 12:30 pm, the SC had to reiterate its stay order, with the SC Registry told to communicate to the MCD that a SC order cannot be flouted. By then, a “mazaar” encroaching a public road in the war-torn Jahangirpuri lay in shambles, and the police had to order a lathi-charge on protesting women.

A while later the police said the bulldozing had stopped. It was probably for the first time that the Supreme Court had to remind the executive that the judiciary reigns supreme. For the hoi polloi this was a revelation, particularly on this day. Would the Supreme Court punish the bureaucrats for not blindly following an order of the Supreme Court of India?

Millions upon millions of litigants must have, since the very first day of Independence, felt angry and disappointed at an order of the Supreme Court, but did they refuse to follow the top court’s orders unless and until it was delivered to them in writing?

After all, a stay on an ongoing anti-encroachment drive is not the same as a jail inmate ordered released on bail, for whose release a written copy of the order is a must. The MCD had no right to sit on the SC’s judgement, forget the fact that the encroachments were illegal. Nothing can be above a Supreme Court order. Period.

Will the top court order action taken against the civic officials? Otherwise, people will stop respecting the judiciary. If the topmost court of the land can be dismissed with a shrug, how will courts lower down the line, fare?

Think of all the people in Jahangirpuri whose livelihood has suffered because of the action taken against them. Above all, why is the undemocratic bulldozer being given a free run? As senior advocate Dushyant Dave told the top court, “We are a democratic society and (yet) they did not stop the demolitions.” (IPA Service)

Concealment, If Any, Of Covid-19 Deaths By Govt Is Un-Ethical
Posting....