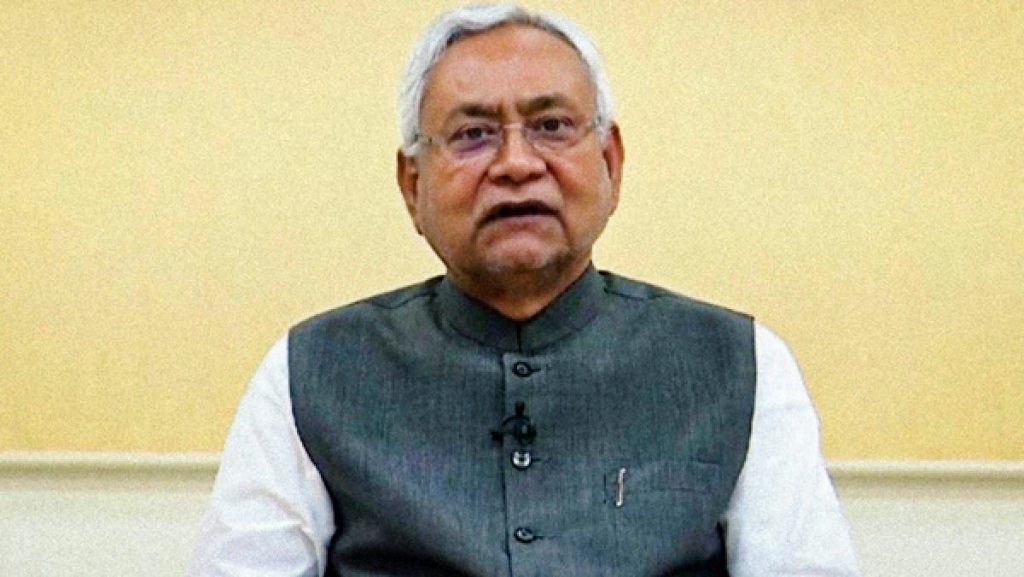 Two decades back Lalu Prasad Yadav had stopped the Rath Yatra of L K Advani and now, once the protégé of Advani, the Bihar chief Minister Nitish Kumar is contemplating to stop the victory chariot of Narendra Modi. But there is vast difference between the two. While Lalu showed his political strength and determination, Nitish is resorting to cunning politicking.  Like Lalu he does not possess the political courage of calling a spade  a spade and face his enemy head on.

Just a couple of days ahead of visit of iron man of BJP, Amit Shah to Bihar to embrace first freedom fighter Veer Kunwar Singh, Nitish Kumar attended the Iftar Party organised by the RJD leader Tejashwai Yadav at his residence.  The BJP is using Kunwar Singh’s secular dialetics.  Kunwar Singh, the king of Jagdishpur, did not believe in caste-based discrimination and had given his life for the integration of the country much before the freedom struggle broke out in the country. He had travelled to many states and organised the group of nationalists and revolutionaries at the age of 80.

Nitish Kumar attending RJD’s Iftar party triggered political row. The visit has come amidst skirmishes between ruling allies Janata Dal United and the BJP over issues of governance and law and order. Of late the BJP leaders, even most seniors, have waged a verbal war against Nitish. They even accuse him of patronizing corrupt leaders and not taking actions against the criminals and underworld dons.

It was in 2017 Nitish severed his relations with Lalu and joined hands with the BJP to form NDA’s government. The latest visit to attend the Iftar party hosted by Tejashwi  has given rise to speculation that Nitish intends to renew his alliance with Lalu Yadav. It is a coincidence that Lalu got the bail in the last fodder scam just the next day of the party.

It is widely known that Nitish and Tejashwi have strained relations. Both of them do not spare a single opportunity to accuse each other. Only a month back the Bihar assembly witnessed worst type of bickering between the two leaders on the issue of insult to Speaker of the house by the state police. Truly speaking Nitish Kumar caused a surprise on Friday evening by dropping in at an iftar gathering organised by political opponent and Rashtriya Janata Dal leader Tejashwi Yadav, triggering speculation about changing political equations. Nitish and Tejashwi had been at loggerheads since July 2017, when Nitish deserted RJD and the Congress and returned to the BJP’s arms to form a new government.

Ever since Nitish hardened his stand towards the BJP, in the wake of expansion of union cabinet by Modi and inducting opponents of Nitish into the cabinet, Nitish has been facing wild attack from the BJP leaders. They have been reaching out to the upper caste people and raising the same issues which Nitish had raised against Lalu for coming to power.  The visit has come coinciding with BJP accusing him of administrative failure and also attempting to gain the upper hand in administrative matters.

Sources close to Nitish maintain that he described the visit as simply a courtesy visit on the occasion of Iftar, his walking 100 metres from his 1 Annie Marg bungalow to the 10 Circular Road home of former chief minister and Tejashwi’s mother Rabri Devi where the gathering was held .Nitish chatted happily with Rabri, her daughter and Rajya Sabha MP Misa Bharti and other RJD leaders.  The sign of earlier rancor was not visible at all. It was a scene of bonhomie.

The political importance of the Iftar party could be gauged from the simple fact that Nitish without citing reasons, excused himself from the event in Jagdishpur where the BJP will set a world record by having at least 75,000 people wave the Tricolour. The idea has been borrowed from Pakistan where 65 thousand people had waved flags at the call of Imran Khan.

The visit of Amit Shah is also politically important for the BJP and NDA as this was in the chain to identify them with the nationalist and secularists freedom fighters.  The message from Amit Shah is also clear. The fact of the matter is relations between the Modi and Nitish have been uneasy since the 2020 Assembly elections. Nitish strongly nursed the feeling that to ensure his defeat and show him in poor light, the BJP encouraged LJP leader Chirag Paswan to field candidates against the JDU.  This was primarily aimed at reducing his seats. In the existing assembly with the total strength of 243 the BJP has 77 seats, the RJD 76 and the JDU 45.

Though Nitish refuted any political importance to the Iftar party, Lalu’s eldest son who was present along with Tejashwi had to say “This is politics and chaos is usual… Today he is in power, tomorrow there could be a change. Earlier, I had put a ‘no entry’ board. But now it has been replaced with ‘Entry – Nitish Chachaji.’ Now he has come”. He also said “We will form a government and the game will unfold. This is a secret… had secret talks with Nitish Ji”.

It is not that Nitish was invited to the annual Iftar party of Lalu’s family. Tejashwi said “We have given invitations to all the people whether it is from BJP, JDU or LJP and it has been a tradition that everyone participates in the Iftar party”. This was also important to watch that party was attended by BJP’s Shehnawaz Hussain and LJP leader Chirag Paswan.

His presence at the Iftar party led to speculations that this was a sign of yet another political volte-face by the Chief Minister. Alliance partners Janata Dal United (JDU) and BJP in Bihar are at loggerheads on several issues, including caste-based census, NDA leadership in Bihar, liquor ban, and law and order situation.

Nitish’s participation at the party was also important for the reason that in recent council elections, RJD has managed to emerge the winner and defeated BJP in the key constituencies. The results of the just concluded Bihar Legislative Council signalled a shift in the state’s Upper House, with the NDA partners winning fewer seats than in 2015, when elections were last held, and the RJD emerging as the second largest party. The big gainer was the RJD led by Tejashwi Yadav, who won six seats, one short of the BJP, and ended up being the second largest party though it had fought on 23 seats. In the last election, the RJD had won only two of these seats.

The Rashtriya Janata Dal (RJD) has won the Bochahan assembly seat of Muzaffarpur, taking it from former NDA. Its candidate Amar Paswan won the seat with a margin of 36,658 votes, three times more than the margin posted by the VIP in the 2020 assembly poll.

Bochahan has around three lakhs voters, among whom the upper-caste Bhumihar and the Sahani (fishing community) were decisive. Early analysis suggests that the Bhumihars voted in favour of the RJD, along with the party’s core Yadav and Muslim voters.  The BJP had fielded its office bearer Baby Kumari, who had won the seat in the 2015 assembly election as an independent candidate – defeating nine-time MLA Ramai Ram.

In fact this victory of RJD has forced Nitish to renew his relations with RJD. He has come to realise that BJP would not be able to ensure the victory of the NDA in Bihar. Its leader Narendra Modi no more commands that popularity and charism which could help the BJP win the election. In that case his association with the BJP would prove to be disastrous. He would be committing hara-kiri by continuing to ride on the bandwagon of BJP.  It is also a fact that BJP has failed to entice the OBC voters and make a base amongst them. It is a misnomer to say that the Scheduled castes and OBC have turned supporters of the BJP or Modi. It is this realisation that has forced Nitish to look towards Lalu and his RJD as the potential allies. (IPA Service)