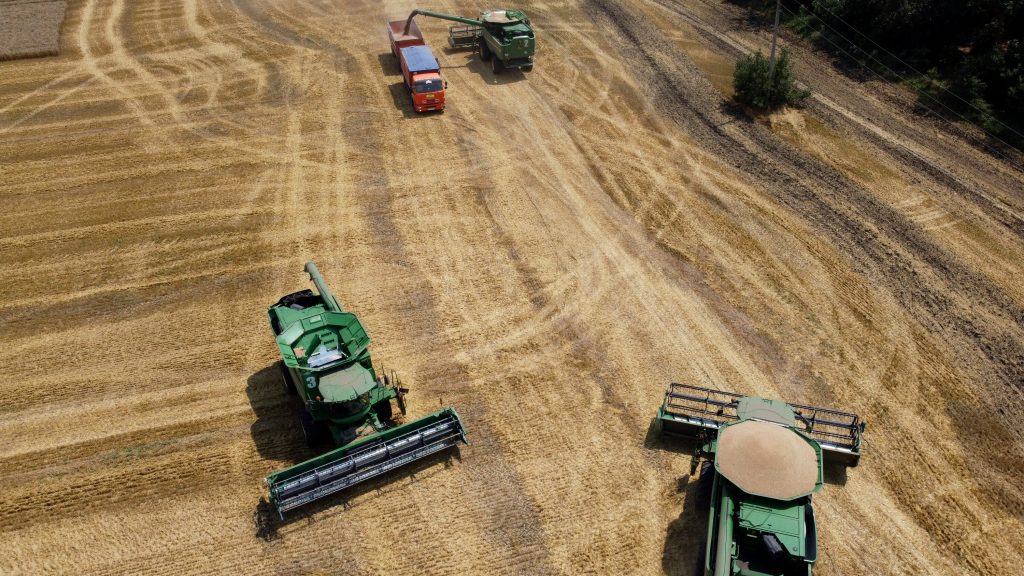 On May 18 UN secretary-general Antonio Guterres sounded the alarm. For him “the spectre of a global food shortage” looms and he fears “this dangerous situation could tip into catastrophe.” “It threatens to tip tens of millions of people over the edge into food insecurity, followed by malnutrition, mass hunger and famine, in a crisis that could last for years.”

Six days before the raid, David Beasley, director of the World Food Programme (WPF), had warned of an impending food disaster: “If we do not address the situation immediately over the next nine months we will see famine, we will see destabilisation of nations and we will see mass migration. If we don’t do something we are going to pay a mighty big price.”

At the time, he was talking about 45 million people teetering on the brink of famine. The war could add tens of millions more. As in 2011, this situation will cause political unrest in many countries. “If we don’t feed people, we feed conflict,” Guterres said.

Before the invasion, the food situation in the world was already precarious. Climate change has a lot to do with that. The increasing number of extreme weather phenomena is detrimental to agriculture and food production. In the past decade, 1.7 billion people have been affected by extreme weather events and climate-related disasters. Last year’s floods could make the yield of China’s winter wheat harvest the lowest in history. The recent heatwave in India will also be very detrimental to the wheat harvest there.

Due to a drought in the US grain belt, 40 per cent of wheat is in bad or very bad shape (normally only 15 to 20 per cent). In Europe, the yield will almost certainly be alarmingly low due to low rainfall. Covid-19 was and remains also a major disrupting factor. The pandemic caused an economic shock. This has reduced the purchasing power of the populations in many countries and disrupted supply chains. Many countries of the South are on the brink of bankruptcy and their access to the financial markets is limited — look at Sri Lanka as an example.

There have been other consequences. The revival of the economy after the pandemic caused soaring energy and transport prices. The energy bill is also rising due to increasing CO2 taxes. These price increases make food products a lot more expensive. All these factors undermine food security for large parts of the world’s population. This is especially the case in the global South, but also for us — just think of the unprecedented number of people who rely on foodbanks.

Before the pandemic, there were 135 million people worldwide suffering from severe food insecurity. In the past two years, that number has doubled to 276 million. Russia and Ukraine play a leading role in global food production. Together they account for more than a third of the world’s grain exports and just over half of the sunflower oil exports. Russia is also the largest producer of fertilisers. Nearly 50 countries depend on Russia and Ukraine for at least 30 per cent of their wheat imports. In 26 countries this is even more than 50 per cent. Together, the two countries provide 12 per cent of the calories traded worldwide and in total about 800 million people depend on them for their food.

The war itself and the sanctions against Russia are having a detrimental effect on both food production and export in both countries. This is especially the case in Ukraine. Due to military violence, a lack of fertilisers and pesticides and higher diesel prices, there is a risk that it will be impossible to plant 30 to 50 per cent of the spring wheat fields in Ukraine. And exports have nearly completely stopped. Until recently, 98 per cent of Ukrainian grain was transported via the Black Sea.

Those exports have come to a complete standstill, however, because Ukraine has laid naval mines and Russia has blocked all Ukrainian ports. Due to a number of problems, rail or freight transport is not a real alternative. Escorted naval convoys could be a solution, but the Ukrainian navy is too small for that and so it would need the support of Nato countries.

Given the strength of the Russian fleet, that would be a more than risky undertaking and could lead to another dangerous escalation of the conflict. Whatever the case, unless Black Sea exports pick up again, millions of tons of grain will simply rot in Ukraine’s silos. With Russia, the problems lie elsewhere. Due to the sanctions, Russian farmers or farms may be short of seeds and pesticides. That will have an important impact on the next harvest.

Farmers elsewhere in the world will unlikely be able to compensate for declining grain exports from Ukraine and Russia. For farmers who grow grain, fertilisers and energy are the main expenses. Both markets have been disrupted by sanctions and the natural gas rush. If farmers cut back on fertilisers, the yields will be lower. In addition, instead of planting grain or maize, farmers will consider switching to crops with lower input costs.

The market has been further disrupted because in recent months no fewer than 35 countries have imposed strict restrictions on food exports, out of fear for their own food security. In many cases those are even total bans. Such a disruption of the global market drives food prices up sharply. As a result of the war, food prices have reached the highest level ever recorded by the Food and Agriculture Organisation of the United Nations. Today food prices are on average 34 per cent higher than a year ago. For grain, the increase is even 81 per cent.

This is becoming more and more unaffordable for many communities, especially in the countries of the South. There, families spend up to a quarter of their income on food. In Sub-Saharan Africa that is even 40 per cent. Moreover, grain makes up a larger part of the budget there than in richer regions.

And then there’s another perverse effect for those countries. Inflation causes interest rates to rise. This makes the dollar and the euro more attractive, causing their exchange rate to rise. But that makes food imports (often in dollars) more expensive for the countries of the South, as well as paying off foreign debts.

The longer the war drags on, the greater the food shortage, the higher the prices and the worse the food crisis will be. The US strategic option to “fight to the last Ukrainian” will not only increase the number of casualties on the battlefield; far away, hundreds of thousands, perhaps millions of people will die of famine as a result.

What must be done to avoid that catastrophe? First of all, the blockade of the Black Sea must be undone as soon as possible. This is only possible in the context of peace negotiations and a ceasefire. That presupposes a de-escalation of the war effort instead of the warmongering that we see now. In any case, according to Western diplomats, we should not expect Ukrainian ports to be opened in the coming six months. In addition, all economic sanctions against Russia related to food production must be lifted. Third, food protectionism must stop. In the words of Antonio Guterres: “There should be no restrictions on exports and surpluses must be made available to those most in need.”

Finally, financial aid is urgently needed for the countries of the South, both to ensure food security and to avert an impending debt crisis. In October, the World Food Programme estimated that it would take $6.6 billion annually to solve world hunger. That’s not even a huge sum of money. For this war alone, Biden has committed an additional $24 billion in armaments and military support.

The military budget of the European countries will also increase by tens of billions in the coming years. Apparently, there is always money for waging war, but for fighting hunger… It shows the madness of the world in which we live. (IPA Service)

Social And Communal Harmony Is Always Helpful For Healthcare
Posting....