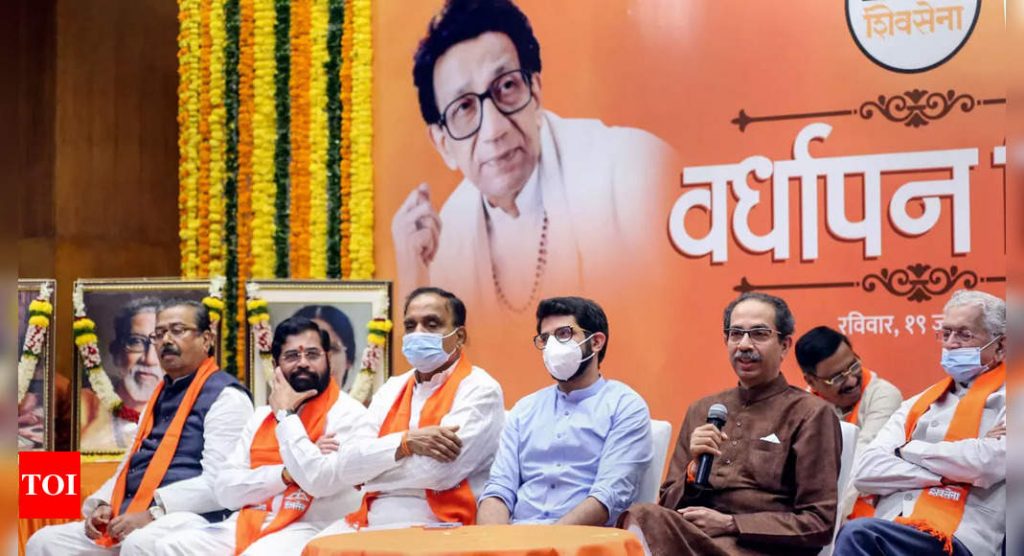 What next for Shiv Sena? Will the Eknath Shinde faction grab the party from “rightful owners”, the Thackeray’s, and run with it? That must be in Shinde’s mind. The fellow is no angel. It requires a stout mean heart to rebel and run roughshod over shallow sentiments. Shinde wants the Shiv Sena for keeps and the Thackeray’s, father and son, do they have the mojo to keep what’s theirs?

Raut is a habitual offender if not a serial one. Raut went beyond his limited brief to knowingly make enemies of every one of the rebel Shiv Sena MLAs. He declared them “Zinda Laash”, he called them “traitors”, he referred to them as “useless trash”, he promised to get their careers vandalised. And neither of the two Thackerays stepped in to rein this wayward mouth.

If anything Uddhav and Aaditya Thackeray encouraged him and Priyanka Chaturvedi to pile on the insults. Uddhav, in fact, said in his second Facebook Live that it was a “mistake” making an “auto driver” a minister. That was Uddhav’s parting shot for Shinde, who if he can lead a rebellion and keep more than three dozen rebels from going astray, must have more qualities in him than what an auto driver will possess.

Shiv Sena founder Balasaheb Thackeray, picked Shinde for special mention and Shinde cannot be dismissed as of no account just because at one time he was moving around on three wheels. Thursday morning Eknath Shinde’s rebels declared they were the “real Shiv Sena”, and from all indications, Eknath Shinde will be No.2 in the Fadnavis cabinet.

Uddhav Thackeray will not be there to watch Fadnavis and Shinde take over Maharashtra after he gave up all the fight in Sanjay Raut and Sharad Pawar. But Uddhav Thackeray today would be worrying more about his hold on the party his father bequeathed to him and he squandered to the ambitions of a party and politician who never was a friend of Balasaheb.

Maybe, Uddhav Thackeray was missing a father-figure in his life after the departure of Balasaheb and found more than solace in an octogenarian who has the reputation of decimating parties like people polish away a good meal on an empty stomach. Uddhav Thackeray, at the time of leaving, thanked Sharad Pawar and those listening heard the respect and gratitude in Uddhav’s soft rendition of “Farewell my…”

The jury is still out on whether Pawar led Uddhav up the garden path or held his hand through a difficult yet heightened phase of his life. The rebel camp has no love lost for Pawar and his party NCP. And Uddhav is not making it any easy for son Aaditya to inherit the Shiv Sena when his turn comes!

In fact, the question is will he be able to save the Shiv Sena from going to the dogs? Contrary to expectations, the 50 to 60 lakh registered members of the Shiv Sena, hardcore kaamgars, did not hit the streets on Sanjay Raut’s dogwhistle to wreck havoc on the rebels’ intention to grab not only government but also party. A few rebel offices got vandalized. And a few rebel MLAs’ relatives got terrorized, that’s all.

From all indications, the majority of the rough and tumble Shiv Sainiks, their street smart reputations intact, chose to watch the drama unfold from the margins. Uddhav and Aaditya Thackeray realized this but both father and son let Sanjay Raut to make a last stand. The future of the Shiv Sena is now in the heads and hearts of the Shiv Sainiks, not in the hands of the Thackerays or in the fists of the rebel Sena MLAs.

The Thackerays made a mistake giving up on Hindutva. What were they thinking? Balasaheb’s Shiv Sena was fattened on a strict diet of Hindutva, however BJP and RSS it is called by the left-liberal. And the Shiv Sena’s Hindutva outdated that of the BJP’s Hindutva, which to tell the truth paled before the Sena’s Hindutva. If one anything felled the three-legged Uddhav Thackeray government, it was Hindutva on wheels, leaving Uddhav Thackeray behind.

Uddhav Thackeray lost his chief ministership to Hindutva. In fact, he helped Hindutva rise in the ranks of both the Shiv Sena and the BJP. A favour done to Sonia Gandhi, or was it to Sharad Pawar and his NCP? If anything, Uddhav’s flip-flop on Hindutva has indefinitely changed the political lay of the land for the Congress and the NCP, whatever happens to the Shiv Sena notwithstanding.

Uddhav Thackeray made a last minute attempt to salvage the remaining vestiges of the Sena’s Hindutva by renaming Aurangabad to Shambajinagar, but it was too much too late! This was a Maratha goal for a long time, but the Thackerays cut it too fine. As Minister for Environment & Tourism, Aaditya Thackeray should have read the headwinds, but like father like son! In front of the Thackerays, Eknath Shinde shines bright as a Hindutva beacon.

If Uddhav Thackeray succeeds in retaining hold of party and the party’s symbol, with what will he go and ask for votes when everybody in Maharashtra has seen him in the company of Hindutva-hating Sharad Pawar? Shorn of Hindutva, the jewel Balasaheb gave to Uddhav to hand it to Aaditya Thackeray, the Thackerays haven’t much of a chance to retain complete hold on the Shiv Sena.

And like the saying goes, sons pay for their fathers’ mistakes. Balasaheb Thackeray for all his positives was all for  dynasty as was apparent when he chose son over nephew, but Uddhav Thackeray fell to the wiles of a foster father of his own choosing and Balasaheb’s dynasty is in dire straits. In fact, Rahul Gandhi is a better placed dynasty-wise than Aaditya Thackeray.

And that because the Congress party is not lost to the Gandhi family. The Shiv Sena on the other hand could be up for auction. If power goes to Eknath Shinde’s head, which it will, it will not take long before Shinde asks Uddhav Thackeray to vacate the driving seat of the Street Car Named Shiv Sena. Like it was with Balasaheb, there can only be one Eknath of the Shiv Sena! (IPA Service)