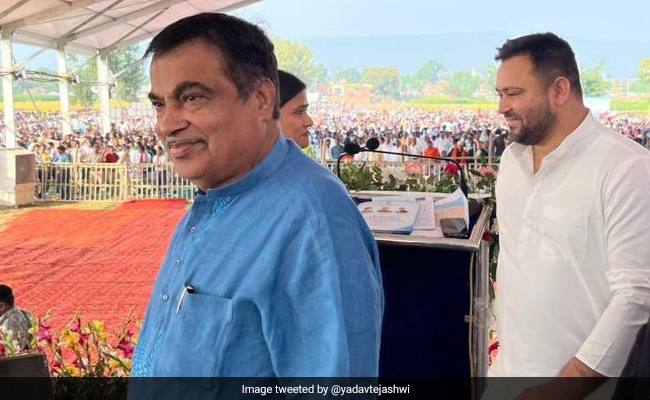 Bihar Deputy Chief Minister and staunch BJP critic Tejashwi Yadav heaped praise on union minister Nitin Gadkari at an event in Bihar. He said Bihar would greatly benefit if more union ministers were “progressive and positive” like him.

“I have no doubt that Mr Gadkari in his department does his best, but we would want that more union ministers should be like him. Like he has a progressive and positive nature towards work, if everyone becomes like him, then what to say,” he said.

Yadav recounted how when he was made the Deputy Chief Minister for the first time and held the road construction portfolio, his meeting with Mr Gadkari was “very fruitful”.

“Mr Gadkari is a progressive leader and minister. In developmental work, he doesn’t look at parties but the people, the country, and the state. How our state will move ahead. I have had a great experience with him,” he said, detailing how Mr Gadkari got funds cleared whenever he approached him.

Yadav further said that he was confident if Bihar gets the special status, “and if they don’t see developed and backward states with the same lens”, then Bihar will also be like Maharashtra, Punjab, and Delhi.

During the event, BJP state President and a bitter critic of the state government, Sanjay Jaiswal, had assured that there is no politics in the development of Bihar. “Whatever you want will get done. Land acquisition is the state’s job. Keep doing it, and I assure you that we will fight your battles at the Centre. All roads and bridges will be built,” he said, adding that all BJP MPs will get the funds cleared for all projects where land has been acquired.

Tejashwi Yadav used Jaiswal’s assurance to pitch another key demand of the state government. He said it would be a great help to the people of Bihar if they got the state special status and got Patna University declared a central university.