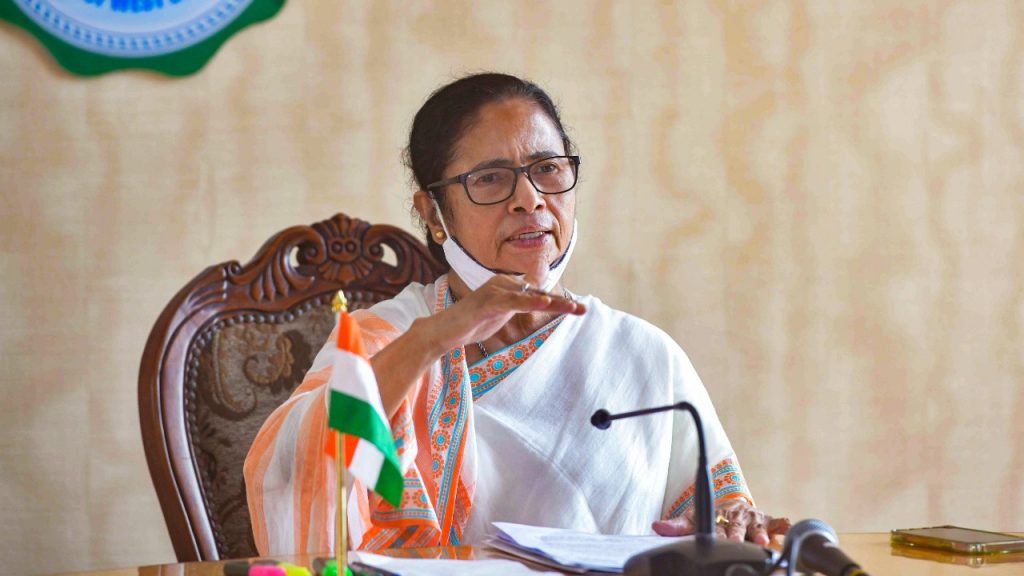 Mercurial Mamata Banerjee, West Bengal Chief Minister and Trinamool Congress Supremo, appears to have climbed down a bit to realize that she cannot on her own bring about opposition unity under her umbrella without main opposition Congress being in the pack. The fact that she had contacted DMK supremo and Tamil Nadu Chief Minister M K Stalin to find a way to deal with high handedness of Narendra Modi led central government in unleashing ED and CBI raids among opposition leaders to make them bend and kneel down. Also she has lately been making overtures that she is not averse to the idea of Congress being part of opposition unity. Stalin who has been advocating that Congress should lead the opposition alliance, may perhaps impress upon Mamata that this is the time to be united and perhaps work towards forging a combined opposition approach to deal with the frequent central agency raids among opposition leaders and parties.

The recent assembly elections results have made it clear that Modi Juggernaut is unstoppable unless opposition come together shedding their petty differences and work together to topple BJP government at the centre in 2024 Lok Sabha elections. It is not an impossible task and workable provided they start working towards it right away. It has happened once in the past when late Prime Minister Indira Gandhi was like what Modi is today. But at that time there was Jai Prakash Narayan, a person with impeccable integrity, who could galvanise all opposition parties with differing ideology to unite to fight Mrs Indira Gandhi. As former Minister Arun Shourie says central agencies will be used or misused against opposition leaders or those against government. This has happened in the past, it happens now and will happen in future as well. But to ensure nothing comes out of it, the opposition leaders will have to be above board and do not have too many skeletons in their cupboards.

There will be vendetta politics to bulldoze opposition parties. The only way to overcome this problem is to ensure that opposition parties come clean so that the ruling party do not exploit this to thwart opposition unity. The congress leaders during freedom struggle were by and large honest and there was some amount of integrity as well which is lacking at the moment. It was led by Mahatma Gandhi, who had impeccable integrity and he set an example. Even when Jai Prakash Narayan led the opposition movement against Mrs Gandhi there were leaders like Morarji Desai who were by and large honest. The present day opposition leaders do not have that kind of reputation. Also it was time the opposition leaders raise above caste, regional and communal politics to make their appeal broad based to take on BJP.

According to political strategist, Prashant Kishor, who is widely speculated to join Congress soon, the reason for SP led by Akhilesh Yadav, though in a position to take on BJP’s Yogi Adityanath in Uttar Pradesh, could not succeed because his party was not broad based encompassing people from all castes and religion. People still saw SP as a party for Muslims and Yadavs with some amount of high handedness and corruption. The fact that not many Yadavs and non-Muslims were elected from his party in the recent elections went to show that the party was not all encompassing party in the state. Caste based politics came into the fore in the late 1980s as former Prime Minister V P Singh of  Janata Dal encouraged it to fight the rising BJP, which was increasingly amassing the support of majority Hindus, who formed 80 per cent of the population. This happened at a time when Congress philosophy of appeasing Muslims angered majority community. Also overemphasis on the scheduled castes and tribes politics, made other backward communities demanding their pound of flesh.

Now to take on BJP, which has already polarized politics, the opposition parties will have to shun their caste based politics to make their appeal to all sections of the society besides clean up their cupboards so that central agencies are not unleashed on them to fragment the opposition unity. These political parties will have to  take all communities including upper castes like Brahmins with them to target those Hindus who are not voting for BJP. In spite of polarization, BJP has not secured more than 50 per cent of the Hindu votes and that meant nearly half of Hindus are still not voting BJP and the target has to be these sane Hindus who do not support polarized politics. To target these opposition parties will have to become all castes inclusive and not supportive a chosen few castes with sizeable percentage as their only vote bank as was the case with SP in recent elections.

Prashant Kishor is of the view it is still doable for opposition parties to come together to give a tough fight in 2024 elections. He is of the view Congress will to have lead the opposition as it is the only national party to take on BJP and has presence all over the country. Kishor was the political advisor to Mamata Banerjee during last year’s West Bengal assembly elections in which she had thumping victory for the third consecutive term.

BJP has very little presence in the East and South. Of the over 200 seats starting from Bihar, West Bengal, Odisha, Telangana, Andhra Pradesh, Tamil Nadu and Kerala, BJP has won about 50 seats and the rest 150 odd seats are with regional parties. In Karnataka, Maharashtra, Madhya Pradesh, Rajasthan, Chhattisgarh, Gujarat and Haryana, Congress and allies in some states are in straight fight with BJP. These states accounted for an additional 200 odd Lok Sabha seats. If Congress gets 120-130 seats in these states, it could form government in alliance government with regional parties in the eastern and southern regions. This is a doable proposition but for this opposition parties will have work hard from now onwards. The dynastic tag and caste based politics of some others will have to be shed to target those Hindus not voting for BJP at the moment besides minorities and dalits votes.

There is also a need for finding a Jai Prakash Narayan to make all parties come together. In this context the role of NCP leader Sharad Pawar, Mamata Banerjee and M K Stalin become very critical.

Though Stalin too has the dynastic tag, he is different. Leadership was thrust upon him as in some other dynastic parties and he worked for it and got it after being in politics for 50 years, which is a very long time.  Pandit Jawaharlal Nehru prepared Indira Gandhi well to take over the reigns without anybody rising eyebrows. DMK supremo, late M Karunanidhi, a clever and wily politician, too prepared Stalin well to take over the mantle after his demise just as Nehru and takeover is smooth as not many suspected his  capacity to lead the party.  Stalin raised from a paper boy in Murosoli, DMK’s mouthpiece and newspaper, to become Chief Minister, after climbing up the ladder step by step to head the DMK. Jagan Reddy of YSR Congress Party and Naveen Patnaik of Biju Janata Dal have risen on their own even though they had their father’s patronage.  They too came to power after the demise of their parents. Mamata and Sharad Pawar have built their party on their own after quitting Congress.

If Congress has to reinvent itself before the 2024 elections, it has to shed its dynastic tag. Punjab elections is a lesson for them. It is a rejection of dynastic and corrupt leaders in the state be it Mr Channi, the Badals, Navjot Sidhu or Amarinder Singh. Fed up with dynastic and corrupt politics, the people voted overwhelmingly to AAP to enable as the party came with no baggage. They had also rejected BJP’s brand of polarized politics. So the key to opposition parties is to become more inclusive parties moving away from communal and caste based politics.  Probity in public life too is equally important and this is a lesson learnt from recent elections. In this context Marxist leader Sitaram Yechury describing Stalin as the most acceptable leader among chief ministers and asking him to convene a meeting of non-BJP chief ministers to discuss federalism, social justice and steps to protect the people of India assumes significance. (IPA Service)