Supreme Court Judges Have Given The Order – Will The BJP State Govts Implement? 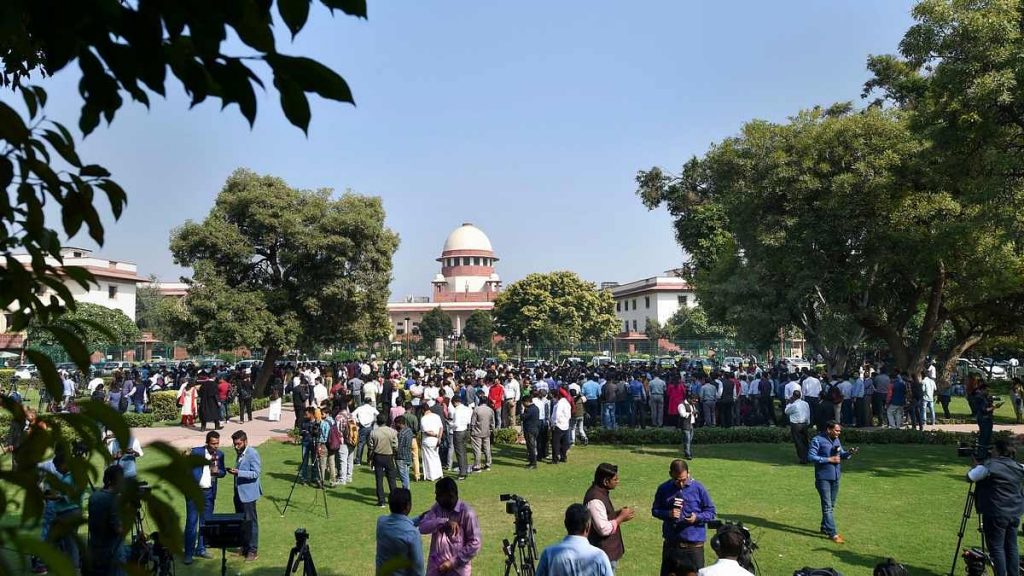 On October 21, when the Supreme Court asked police of Delhi, Uttar Pradesh and Uttarakhand to initiate direct action against hate speech and not “wait for complaints”, adding that “hesitation” will invite instant retribution, the first thought that came to mind was that the Supreme Court had finally applied the much-needed stick to the police lathi.

A second thought was that the Supreme Court had overstepped its brief. This wasn’t what the statute prescribed. The top court gave the police overriding power to wage “jihad” against not only hate speech, but also dump due process in the process!

Following this order, it’ll be nothing less than open sesame. The order “don’t wait for complaints” is fraught with misuse, and can be invoked against anyone, anywhere, anytime. While “hate speech” has to be acted against, handing law enforcers unbridled powers is tantamount to putting the wolves in charge. Somebody will then have to play Judge Dredd!

Vast numbers of Indians of a particular stock have lost their respect for the judiciary, and among them are the “officers” the top court singled out for special treatment. The rulers after 2014, betray only contempt for the court system, partly because the courts allowed things to come to such a pass with apparent one-sided rulings.

Today, a very big part of India’s population has lost faith in the top judiciary. The observations of random judges in open court in cases involving two or more communities have laid bare their bias. Judges go off on a tangent, unable to stop themselves from cheering a particular community, favouring this or that side. In this case, Justice KM Joseph and senior advocate Kapil Sibal formed a mutual admiration club!

That said, the subject was “hate speech”. Instances of hate speech have skyrocketed since 2014. Hate speech leaves a bad taste in the mouth, except that some people like the taste. The BJP, in particular, is believed to have a great liking for it. Therefore, the two-judge bench was cautious not to sound one-sided when a “climate of hate prevails in the country.”

Justices K.M. Joseph and Hrishikesh Roy ordered that FIRs should be lodged against makers of hate speech “irrespective of their religion so that the secular character of the country is preserved”. However, the fact that the “interim directions” were aimed at the Delhi Police, the Uttar Pradesh Police, and the Uttarakhand Police, told a different story. The two BJP-ruled states and the police of Delhi, which is controlled by the Union Home Ministry, were issued notices and asked to submit ATRs.

Also, the court was hearing petitioner Shaheen Abdulla, who had specific complaints. The court ruling triggered the “you scratch my back, I scratch yours” episode, with Kapil Sibal saying “We are deeply, deeply obliged”, and Justice Joseph replying “We are doing far too little” followed by Sibal’s “at least somebody has listened” till Justice Joseph cut it short with “We have to… it is our duty. If we don’t, it is plain abdication of duty…”

The court was serious. If nobody else, the court sees the Armageddon coming if things are allowed to vitiate the communal atmosphere. So, it made sure the order was read out loudly and let it be known that at the crux of the argument were the rising incidents of rightwing Hindu hate speech directed against Muslims, also known worldwide as “Islamophobia”.

Petitioner Abdulla complained of the “total inaction” of the police of the “three States” to act against organisers of hate speech in Delhi and Haridwar with “open calls for the genocide of Muslims”. Advocate Sibal pressed the panic button and sought action under relevant sections. ”These events are happening every day,” he said.

This was when Justice KM Joseph got emotional: “Where have we reached? What have we reduced religion to? It is tragic… and we speak of scientific temper…” Nice to hear, but this is what luminaries of the judiciary should eschew, getting emotional.

Justice Roy was the most telling. “Very shocking statements have been made in a country that has to be religion neutral,” he said, and in his observation was the admission that the country was far from “religion neutral”, and that “Bharat as a secular nation” was for the birds and the bees, not to those who look and behave differently except when going for each other’s throats, which is when they show common intent and similar purpose, and contempt for each other. (IPA Service)