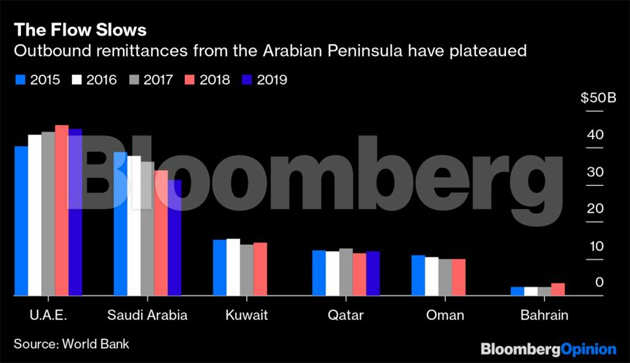 There is no mistaking it. The drastic decline in migrant remittances over the last few years has affected Kerala’s fiscal health.

While the world which came to a standstill due to Covid 19, Kerala was hit the hardest by the reverse migration which the pandemic triggered. An immediate corollary has been the sharp fall in remittances from the non-resident Keralites (NRKs) in foreign countries, especially in West Asia. With the covid-induced crisis continuing unabated, the amount of money migrant worker send home is set to decline by 25 to 30 per cent this year. And the outlook for the future is grim.

A study of the migrant workers life says that the remittances are likely to drop further to 40 per cent. The study says that while the remittances Kerala attracted in 2018 was Rs 85,000 crore, it increased to more than Rs one lakh crore by 2020.This cannot but have a disastrous effect on the State’s economy. It would lead to a severe shrink in the State’s GDP. Another study has it that an astounding 14.33 lakh migrants returned to Kerala between May 2020 and April 2021.

The survey further says that more than half of the returnees are below 39 years of age. Among the 47 per cent who lost their jobs, 39 per cent have complained of non-payment of wages/salaries or severe cut in wages. As much as 8.8 per cent of workers who managed to work during the pandemic, went without wages. As if this was not enough close to 11 per cent of those whose work visas were not extended, suffered theft of wages.

What are the prospects of re-migration back to the West Asia and other foreign countries? Pretty grim. There are no signs whatsoever of the situation improving in the near future. In other words, 60 per cent of the returning emigrants want to go back in search of fresh jobs. Reports have it that it would take two to three years for the migrant job market to become normal. But there are more hurdles to the return of the migrants. The availability of workers from other Asian countries who are prepared to work for lesser wages than Indians is a big constraint. Also, the recruitment norms of locals in the migrant-host countries has become strict. Which has severely affected the prospects of the Keralites hoping to return, especially to Gulf countries.

What will be the fate of around 30 per cent of the returnees who want to be re-integrated into the Kerala society and find employment here? Here, the Kerala Government has its task cut out. It will have to take a slew of steps to adjust the returnees in the State. Urgent steps are needed to impart skill to unskilled workers who are back in the State. The phenomenon of reverse migration predates the outbreak of the pandemic. The onset of Covid has only exacerbated the situation. The only option before Kerala is to ensure the return of the migrants to their host-countries by equipping them with the requisite skills. That is the only way to ensure restoration of status quo ante as far as foreign remittances are concerned. But, several factors mentioned above show that it is easier said than done.

It is, reassuring, however, to note that the Kerala Government is aware of the magnitude of the problem, and has exhibited the will to measure up to the challenge. The third edition of the Loka Kerala Sabha (LKS), which was attended by non-resident Keralites from 21 countries representing all continents and 21 states in India saw forward movement in this direction. The objective of the LKS is to provide inclusive democratic space for Keralites all over the world. It is not a business or investors meet as is being made out by vested interests.

True, many recommendations of the first Loka Kerala Sabha held in 2020, could not be implemented because of the shutdown caused by the pandemic. But much work has already been done. For instance, the LKS has ensured better coordination of while using the expatriates’ experience for the State’s welfare. This was evident when Kerala was buffeted by unprecedented floods and Covid 19. Another important achievement has been the setting up of a company – Overseas Keralites Investment and Holding Ltd – to finance development projects with NRK investment. Chief Minister Pinarayi Vijayan has also announced the Kerala Migration Survey 2022-23 to prepare a data bank on Malayali expatriates in different parts of the world. He admitted lack of a data bank had affected the Government’s welfare measures for the expatriates. A Malayali Pravasi Portal will also be launched as part f this.

Preparations have begun to establish centres to impart training in foreign languages of major host countries. There has been much progress in the proposal to set up a woman NRK cell to ensure safe migration of women overseas. Migration facilitation centres and pre-embarkation orientation centres in passport offices have also been constituted.

That said, it has to be conceded that much work remains to be done. For instance, an NRI Construction company to take up various development projects has remained on paper. Another key proposal, made by the previous editions of the LKS, relates to a Pravasi Bank. No follow-up has been done in this direction. Last but not the least is the crying need for a concrete mechanism to monitor and follow up whether these proposals approved by the State Government have been implemented.

A matter of grave concern has been the decline in bank deposits by NRKs. It is indicative of the acute distress among the expatriate community in the State. NRI deposits in Kerala banks have fallen by Rs 593 crore to Rs 235, 897 crore for the quarter ending September 2021 from the previous quarter. The decline shows that the expatriates, a large number of them jobless, have been forced to dip into their savings to survive.

The situation is pretty grim. And the Kerala Government will have to pull out all the stops to ensure that the expatriates’ lot improves in the near future. That way lies the path to the State’s economy, in bad shape at present, perking up. A daunting task indeed. (IPA Service)