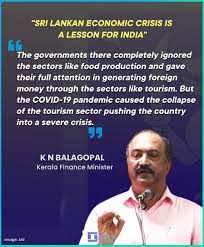 Prime Minister Narendra Modi said recently that India is the fastest growing economy at the moment. Statistics wise it may be true as other countries are doing badly. But the question to be asked is India’s growth story a myth or reality? On the face of it Indian economy may look reasonably good when compared to many other countries. Particularly after the Covid Pandemic the recovery seems to be reasonably good and quick.

But the question remains is India on the right track and is it on the properroad to recovery.   It is difficult to say. The overall macroeconomic fundamentals of the Indian economy is not all that bad but there are worrying signals and if correctives, some of them drastic, are not taken, the days are not far when Indian economy could face serious problems. More than it being covid induced, the economic woes are structural and some far reaching reforms are needed as was done in 1991.

BJP leader Subramanian Swamy may be a maverick politician but there is some truth in his views on the economy, after all he has studied his economics in Harvard that too under noble laureate Paul Samuelson. Swamy says the economic woes started in 2016 beginning with demonetization, an ill- advised move. An economy which was growing at over 8 per cent started slowing down quarter after quarter, so much so that it fell close to 4 per cent in the last quarter before covid pandemic hit in 2019.

Covid only accentuated the problem with growth touching its nadir at negative 24 per cent at one quarter of 2019-20. It is not only demonetization but poor implementation of GST hit the cash-based informal economy, which accounted for over 85 per cent of the employment and 90 per cent of the small businesses in the country. This led to shrinking of demand in the entire country, which subsequently affected production, thereby the industry and the economy. Covid and the lockdown further worsened the economy.

The question that is often asked is will India go the Sri Lanka way or for that matter Pakistan, Nepal and to some extent Bangladesh way. The answer is certain no at the moment as there are several positives in the Indian economy with exports picking up indicating revival of economic activity. But inflation, depleting foreign exchange reserves, falling rupee, spiraling crude oil prices are worrying and if structural correctives through right economic policies are not taken, Indian economy could face difficulties.

The negative trends are already visible with India’s economic growth projected over nine per cent this financial year has already been revised downwards several times and the projections now range between 7 to 7.5 per cent. Nomura has forecast a low of 4.7 per cent growth for the Indian economy in 2023, which may be a slight exaggeration but it does indicate all is not well for the Indian economy going forward with recession expected in some of the advanced economies. Chinese economy too is not doing well, which could severely impact adversely the sliding global economy.

India may not go the Sri Lanka or Pakistan way as the economy is quite large and some of the developed states are doing reasonably well. But there are warning bells as according to recent Reserve Bank of India report, 10 states in India have unsustainable levels of debt and high fiscal deficit. This is dangerous. Each state is bigger than Sri Lanka and some of them are as big as Pakistan. RBI has flagged the issue saying fiscal risks seem moving sub-national. Some of the states particularly Punjab, Rajasthan and Bihar spend 90 per cent of the revenue they earn on expenditure like salaries, debt servicing and other revenue expenditure.

Hence there is very little money left for developmental activities and capital expenditure. The other states spend more than 80 per cent of their revenue on these routine expenditure of the state leaving not much money for capital formation, Days are not far off when they may have to start borrowing to meet their revenue expenditure and debt servicing, which is dangerous.

According to RBI report, Punjab, Rajasthan and Bihar are expected to remain stressed with their debt to GSDP (state GDP) ratio likely to exceed 35 per cent by 2026-27.  The other states included West Bengal, Kerala, Andhra Pradesh, Uttar Pradesh. The report said “Risks to state government finances arise from macroeconomic uncertainty, declining own tax revenue, re-launch of the old pension scheme by some of the states, rising expenditure on non-merit freebies, expanding contingent liabilities and ballooning overdue to discoms, warranting strategic corrective measures.”

These are strong words and it is time political parties who for their short-term gains dole out freebies promised during elections without ensuring they earn enough revenue to fulfill those promises. Free power, free bicycles, laptops so on so forth to get votes are not good ideas particularly when the state economy is not doing well. If these states were separate country like Sri Lanka, Nepal or Pakistan, they would have faced bankruptcy like those countries. Fortunately, these states have an umbrella in the form of a central government. If such a situation continues for long, it would impact the nation as a whole, which is also facing some structural difficulties that needed correction.

According to revised estimate, debt-GSDP of Punjab was the highest at 53.3 per cent, followed by Rajasthan at 39.5 per cent, Bihar 38.6 per cent, Kerala 37 per cent and West Bengal 34.4 per cent. According to various scenarios built in the RBI report, if contingent liabilities are fully invoked, Rajasthan will see additional 8.6 per cent debt in relation to GSDP, followed by Punjab 5.3 per cent, Kerala 3.9 per cent, Bihar 3.4 per cent and West Bengal, 0.9 per cent. The N.K. Singh led finance commission and the fiscal Responsibility and Budget Management committee suggested debt-GSDP ceiling of 20 per cent to states. Financial restructuring or bailout to ailing state discoms will have severe impact on the debt-GSDP ratios, the report said.  Before the pandemic the combined gross fiscal deficit of state governments remained at modest 2.5 per cent, much lower than FRBM ceiling of 3 per cent for states.

This is not a happy situation. The centre also needs some serious economic policy reforms like massive efforts to push demand, remove supply constraints and pumping in huge investments in infrastructure development to kick-start the economy as well as providing jobs to millions of people particularly in rural areas. According to Subramanian Swamy the first two or three things that the Modi government should do is to abolish income tax, increase fixed deposit rates in banks and reduce interest rates for borrowing. He is of the view that if income tax is abolished, more money will be put in the hands of the people to spur demand apart from sizeable black money stashed abroad coming back to the India by way of investments in the country.

According to him at least $2 trillion ill-gotten money by Indian politicians and businessmen are stashed abroad in safe havens, where the banking system is not governed by Basel prudential norms. Even half of it return, there will be massive investment in the country, enough to get back to high growth path. No one is asking Prime Minister Modi about his 2014 promise of putting Rs 15 lakh in the bank accounts of each and every Indian by bringing back the ill-gotten money stashed abroad. At that time the estimate was $1.4 trillion. Now according to Swamy it is around $2 trillion.

Already there are reports of asset bubbles developing in many advanced economies. China too is not doing well. There are reports of many Chinese banks having huge and unsustainable levels of non-performing assets. Many smaller Chinese banks at district level are already moving towards bankruptcy. So far the Chinese government has been able keep it under wraps the imminent implosion of the banking system because of its huge foreign exchange reserves at over $3 trillion and strong macroeconomic fundamentals. But going forward the Chinese economy too face bumpy road ahead.

So overall it is not a happy global economic situation. India may be the fastest growing economy at the moment but going forward, it could be very difficult and immediate and out of the box correctives are needed to steer the economy out of the woods. Right now the real economic situation in the country is not all that rosy as being projected. (IPA Service)