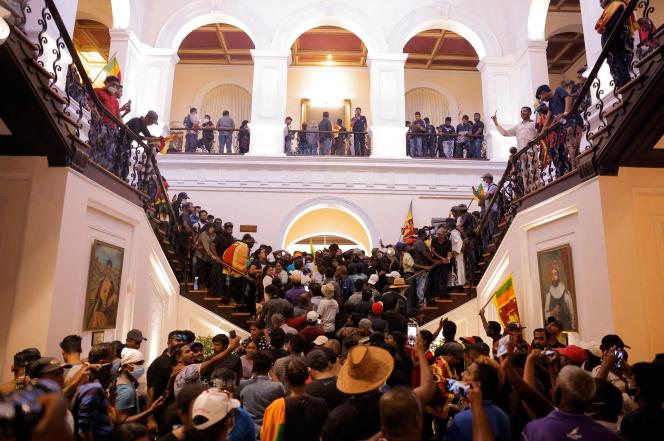 Even though no immediate solution seems to be in sight for millions of hungry people, Sri Lanka is fast becoming a strategic flashpoint. Earlier, there were talks about different world powers playing their roles in giving Gotabaya Rajapaksa and Basil Rajapaksa a safe exit from Sri Lanka by getting their consensus choice – Ranil Wickremesinghe — become the new president.

While the political and financial crisis continues, the country seems to be inviting unwarranted troubles on strategic issues. The latest flare-up comes as the Chinese research vessel Yuan Wan 5 makes a call at Hambantota port on August 11 for a week. It’s said to be on the Sri Lankan port, which was leased out to a Chinese company for 99 years in 2017, for “space tracking, satellite control and research tracking in the North-Western part of the Indian Ocean region.”

Reacting to the news of the scheduled docking of the Yuan Wan 5, Indian foreign ministry spokesperson Arindam Bagchi said during his weekly media briefing on Friday, “The Government carefully monitors any developments having a bearing on India’s security and economic interests, and takes all necessary measures to safeguard them. I think that should be a clear message.”

Earlier, Sri Lankan Defence Ministry had denied the reports that the Chinese research vessel was to dock at Hambantota port. But on July 30, it confirmed the development saying the clearance was granted by Sri Lanka’s Ministry of Foreign Affairs, the Ministry of Defence, and the Sri Lanka Ports Authority weeks ago the new President took office. Sri Lanka had signed an agreement to lease the Hambantota port to China Merchant Ports in place of its $1.2 billion investment in the project in 2017.

Ranil Wickremesinghe was the prime minister when this agreement was signed. The docking of Chinese ships in Sri Lankan ports has been a sensitive issue with the Indian security establishment. In 2014, there were at least two instances of Chinese warships docking at Colombo harbour despite India raising concerns over the issue. It turned out to be a watershed moment in India-Sri Lanka relations when the traditional bonhomie and cooperation took the backseat.

The latest political and economic turmoil in Sri Lanka has got India involved and it has offered nearly $2 billion in the last six months while another $ 2 billion of assistance is in the pipeline. Sri Lanka is facing an acute crisis of foreign exchange and it’s not able to buy the essentials – food, fuel, and medicine. Besides, it is under a crushing debt of $51 billion, of which at least $7 billion must be paid this year itself. Together, Sri Lanka needs $10 billion in the next 9 months to stay afloat as a viable economy. And, that’s not easy to come by as the world economy is sliding into recession and many smaller economies are close to Sri Lanka-like situation, Pakistan is the most glaring example right in the neighbourhood. Besides, Bangladesh, Myanmar, Maldives, and Nepal are also in the grip of depleting foreign exchange crisis.

In all likelihood, Sri Lanka’s economic crisis is not getting resolved any time soon and Ranil Wickremesinghe is not expected to produce any miracle. The Chinese research vessel making a call at the Sri Lankan airport at this sensitive point in time could have been averted but that’s not how China would play its cards. The 2014 docking of a nuclear submarine in the Colombo harbour had come ahead of Chinese President Xi Jinping’s South Asia visit. After the accusation of navigation bullying in the South China Sea, the Chinese activities in the Indian Ocean which is a matter of concern among world powers such as the US and India and they fear that China will convert the Hambantota port into a naval base. From the commercial point of view, the Hambantota port is not much important but as a naval base, it can have enormous leverage on Asia-Europe trade in case of a conflict.

The new Sri Lankan president is virtually powerless given the empty coffers and angry protestors he has inherited. Protestors consider him to be a Rajapaksa’s man and don’t want to cooperate with him. He is the lone member of his party — the United National Party — in parliament and became the president with the support of Sri Lanka Podujana Peramuna (Sri Lanka People’s Front) to which the Rajapaksas belong. His efforts to form a unity government have not produced any results. The IMF bailout package that was actively being discussed in the previous months is said to be delayed by at least a month because of the protests. Now, it’s expected in September 2022. A powerless president with empty coffers, hungry people protesting on the streets, and a Chinese military ship docking at its port which is effectively in full Chinese control is a worrisome picture. (IPA Service)