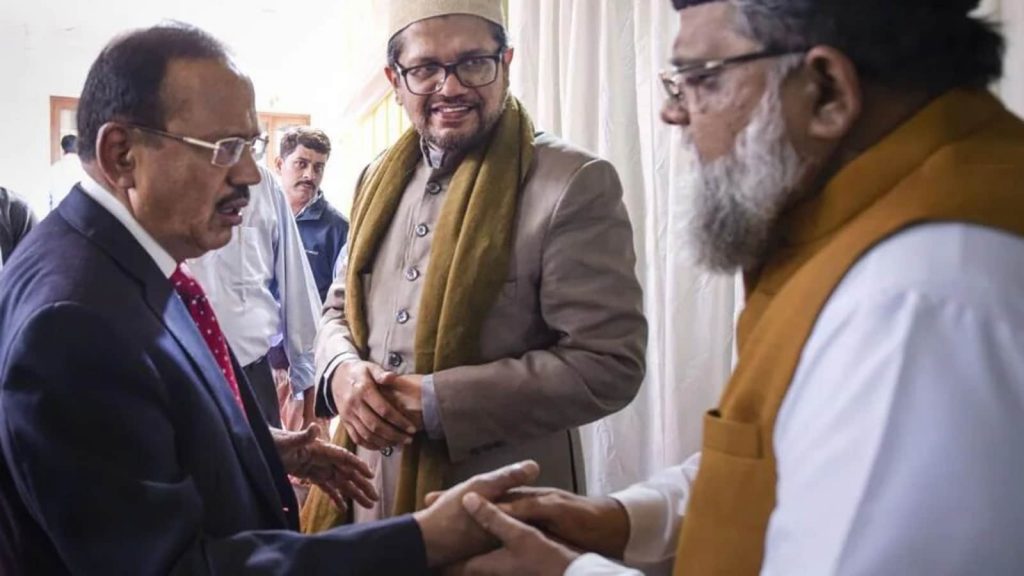 Forget about the 56” chest; forget about ‘vishwaguru’, answer just this one question: “What was the National Security Advisor of the Prime Minister of India doing at an inter-faith meet talking national security matters with a bunch of clerics, asking their permission to ban the radical Popular Front of India, if at all?

Can a government fall any further low? Has the Modi government lost its mandate? Is the Prime Minister in control? Last heard, the next general elections haven’t been advanced. Nor has the Modi government been reduced to lame-duck! And, if this was about Parliament brought to a ‘town-hall’, that still doesn’t mean that the government of the day should succumb to “elements” out to disturb communal harmony.

And even if there’re communal disturbances, chairing ‘Sadh bhavana’ meetings is always left to the likes of the district collector, and the district police chief. But, for the NSA to “grace” the occasion, is evidence that the government, the Prime Minister, is in panic, and the NSA had failed in his duty to lift the great man’s flagging spirits.

This is the second time in three months, the Modi Government wobbled on a weak knee. The first when Qatar called Modi’s bluff on Nupur Sharma. The EAM and the NSA lost their wits, and Modi had to put one of his own under the bus. Also, for the first time in 75 years, India faced global criticism and international humiliation.

Now, the NSA has been reduced to a bystander; undermining his own standing, and role; involving non-state actors in the matters of internal and external security; pleading with clerics to help because India’s domestic troubles have spilled overseas. Clearly, the Modi government has been reduced to a helpless heap. It’s not for nothing that the Opposition is labelling the Modi government the weakest in independent India, and here we are just days away from the 75th year of India’s Independence.

India has a Parliament, an independent judiciary, a fairly robust executive, our own armed forces, police forces, and paramilitaries. So, what was the NSA doing discussing internal threats with religious figureheads? What else is this other than abdication of duty, and power? The NSA’s job is to advise the Prime Minister on external and internal threats. He cannot be seen hobnobbing with religious heads in a secular India?

What do Sufi clerics have to do with banning PFI? What if the Sufi clerics had refused, and dared the Centre to ban the PFI? It would be tantamount to a breakdown of law and order. The Government of India would have lost its right to rule. Even otherwise, Modi’s popularity among the Hindus is on the wane. The killing of BJYM leader Praveen Nettar and subsequent calls for the “Yogi model” was the last straw.

And now, the beheadings and their aftermath with the Sufi Muslims in the middle of it all was messing up Modi’s domestic plans, including his earnest efforts to build a Muslim votebank to rival that of the secular parties. The BJP has come around to the thinking that the Hindutva votebank behind Modi’s two LS victories doesn’t need further mollycoddling.

Also, there’s August 15, just round the corner, and Modi has his I-Day speech with its various elements memorized. Of course, he won’t be talking of inflation and the rupee falling out of grace, but he will be talking of ‘sabka saath, sabka vikas’ with a lump in his throat. The Hindus can be managed, the challenge is to keep the Muslims in good humour. Therefore, the NSA, in the meeting with Sufi clerics, requested permission to ban the PFI. (IPA Service)

Mamata Banerjee Has Botched Her Chances Of Playing A National Role
Posting....