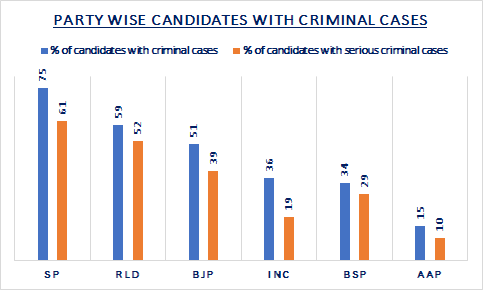 As many as 156 candidates contesting in the first phase of Uttar Pradesh Assembly elections 2022 have declared criminal cases against themselves, of whom 121 are facing serious charges, a report by Uttar Pradesh Election Watch and Association for Democratic Reforms has said.

The report has analysed self-sworn affidavits of 615 candidates out of 623 who are contesting in Phase 1 of Uttar Pradesh elections to be held in 58 constituencies spanning 11 districts on February 10. More than 50% constituencies (31 out of 58) are red alert constituencies — where three or more contesting candidates have declared criminal cases against themselves.

In terms of political parties, the Samajwadi Party (SP) has the highest percentage – around 75% — of candidates with criminal cases, followed by the Rashtriya Lok Dal (RLD).

Just 12% of the total candidates contesting in the first phase of Uttar Pradesh elections are women. BJP’s Amit Agarwal, contesting from Meerut Cantt, has the highest declared assets in Phase 1. The average of assets per candidate contesting in the first phase of Uttar Pradesh elections is Rs 3.72 crore. US says it does not endorse Rahul’s Pakistan, China remark
Posting....