Six Months Of Ukraine War That Changed The Global Economy 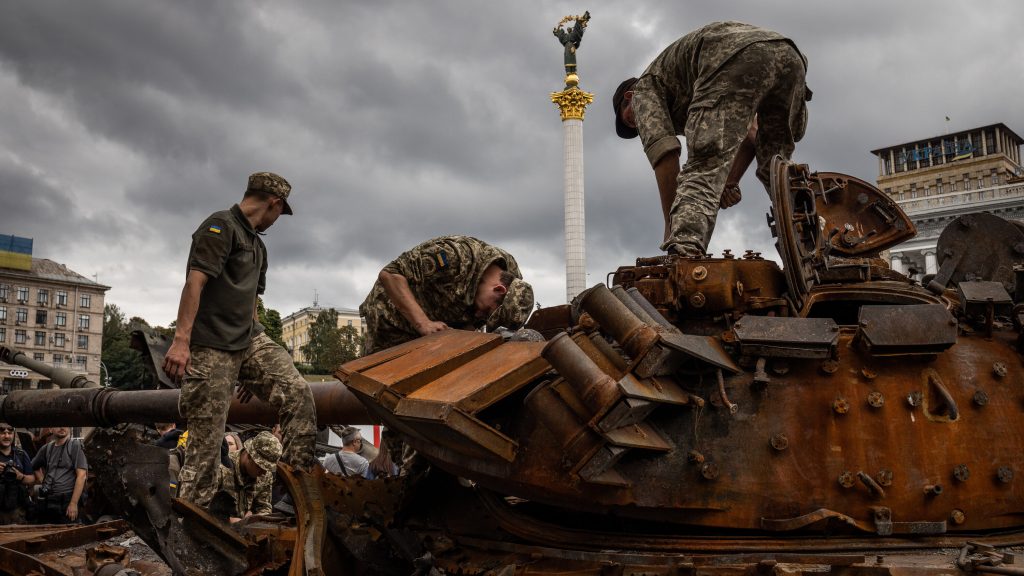 When the Russian army had moved into Ukraine on February 24this year, every expert in warfare and the entire Western Bloc had expected Russia to overrun the victim in flat 72 hours. Russia, and its president Vladimir Putin, had organised how the victory celebrations were to roll out at the centre of Kyiv, Ukrainian capital.   The   last    six   months of Ukrain   war had defied    all logic and   expectations.

In 2022, the Ukraine war had blown up the cover of Russia as a super military power. What it has exposed is that Russia as a military power is not equal to even smaller European countries let alone the NATO. Even Russian weapons and artillery fire power were better handled by its adversary Ukraine than itself, when both had the same Soviet era weaponry.

Russia has been exposed as a clumsy, careless, technologically backward country and, yet, extremely dangerous for the world because of its stockpile of nuclear weapons and its scant regard for a rules based international order. It is an immature dreamy child in a room full of men.

Diplomatically and as a military power, Russia has depended on bluster to prop up its nationalistic pretensions. It had threatened all and sundry with unimaginable destruction in case any one dared to intervene in Ukraine.

Yet, USA and Western Europe had intervened in every possible manner in the Ukraine war and directed the course of the war, excepting participating in Ukraine on the ground. Yet, Russia could not stop any of that, nor provided any deterrence.

On the other end, and in sharp contrast, the combined economic firepower of the entire western world could not undermine the Russian economy. Belying all predictions of calamity and crash, the Russian economy has continued to perform and   finance  the disastrous military campaign.

The Russian rouble has not sunk, despite such threats from the US president, and the economy has defied a sharp contraction as projected by western economists. Even though Russian banks have been thrown out of the international banking clearing infrastructure, they have survived and doing brisk business with Russia.

The wide-ranging economic sanctions against Russia had fallen on their face. Russian oils were lapped up, the Russians could get paid by the buyers, the Russian oligarchs are ever indulging, maybe without their expensive yachts. The Russian people are not getting their MacDonalds burgers. But they are doing as well with their hometown fast foods.

How was it possible for Russia to weather the huge economic tornado that the West had thrown at it? What made the difference?

The primary reason that Russia could survive the western economic blockade is because the global economy has become multi-polar and no anger depended solely on the combined economic might of the Western Europe and the United States.

Two emerging market countries, India and China, had tilted the balance and made the difference. Their refusal to accept western economic sanctions against Russia and continued purchase of Russian oils and energy products, India’s purchases of Russian military hardware and Russian access to these economies for purchase of vital supplies for its survival had baled out beleaguered Russia.

The emerging market economies, on their own, can make a difference in the global economic fortunes and this needs to be taken into account in future calculations of geo-politics. The equations have changed from a Europe-USA centric world to a broader board, and this was best articulated by Indian foreign minister, S. Jaishanker.

Faced with persistent questioning from western journalists about India’s refusal to take sides, mainly with the west, Jaishankar had pointedly observed that Europe must realise that its problems were not necessarily problems for non-western countries. Believe me, he said, we have a “fairly decent idea” of what was in our interest.

What is of critical importance for us to realise is that India has emerged out of its cocoon and is a singularly important player in global geo-politics, more so, because of China’s “limitless friendship” with Russia.

But this should not breed complacency that the Ukraine war could pass off without any deep effect on the rest of the world. The Ukraine war had also changed, in the last six months, the future profile of the global economy.

Two vital staples for sheer survival, food and fuel, have been found to be dependent on tentative supply lines.

Russia and Ukraine have been the principal supplies of wheat and several other food grains and articles. Countries now feel that above all, it was important to nurture and develop their local food crops and food economy than be dependent abjectly on cheaper supplies from a select few.

This could strike a blow to global trade in food items, as countries pay attention to their local food economy. We had witnessed a decade and more of comfortable dependence on global food trade for meeting local hunger.

Similarly, with fuel. Russia is the second largest depository of oil and natural gas and many countries were accustomed to steady and easy supplies from Russia. This is especially true of Europe and most painfully for Germany. For decades under an indulgent chancellor, Angela Merkel, Germany had become too comfortable with reliable energy supplies from Russia.

The Ukraine war, and Russian threat directly to central Europe, had as if woken up Germany from a deep slumber. Starved of cheap gas supplies, German industries, households and economy have initiated a process of adjustment to life without Russian gas.

Once the war is over and things struggle back to normalcy in Europe, Russia would be saddled with large surplus gas and oil production. Gas being somewhat non-fungible, could not immediately be traded and pockets of surfeit would emerge.

Overall, there could possibly be surplus of oil, gas and energy supplies in the post war situation. The prices of energy should tend to fall.

The process has also been set for faster development of alternative fuels, including renewables. Countries are initiating action programmes, fortunately begun earlier under climate-change mitigation measures, for harnessing solar and wind power. These are being taken more seriously now.

The Ukraine war has set forth some macro-economic readjustment processes as well. The war had kicked off price rise throughout the world — something which was forgotten and thought to never bother the policy makers and the people.

Heightened price levels, and continuing inflation, are a serious threat to macro-economic policies which had supported the global economy. Rising interest rates and contractionary credit policies could become a check on continued growth. The rising interest rates in the developed world give rise to hectic movement of capital across the financial markets. These generally go against the developing and emerging market economies. Funds flow to the US and Japanese markets which have their trailing implications.

These adjustments should mean global turmoil in the financial markets, including higher volatility in the stock markets and their larger implications. Such financial uncertainties should also affect the emerging market economy currencies and exchange rates.

In the wake of the Ukraine war and the adjustment period, the prospects for the developing world should become more uncertain and would impose a disproportionately larger burden on them.

Thus long after the end of the war, people could have to continue and suffer from their economic woes for the battle between Russia and Ukraine backed by NATO. The countries    will have to make adjustments to the new realities that will emerge in the post war era. (IPA Service)