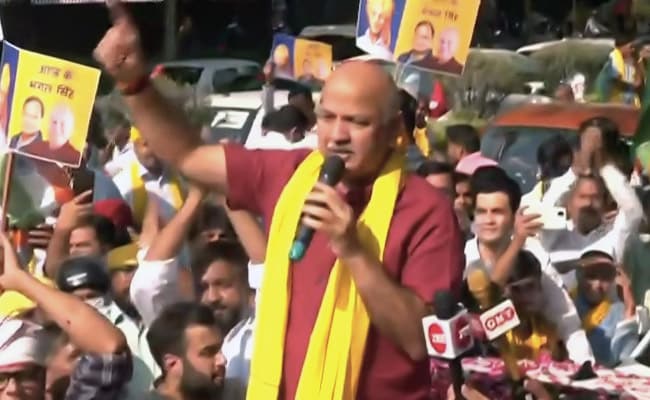 Delhi Deputy Chief Minister Manish Sisodia, called for questioning by the CBI in the liquor policy case, predicted his arrest today as part of a BJP “plan” to stop him from campaigning for the upcoming Gujarat election. He took out a roadshow and made a series of stops on his way to the CBI office, including Mahatma Gandhi’s memorial Rajghat, and addressed Aam Aadmi Party (AAP) workers.

“I was supposed to go to Gujarat in the coming days for the election campaign. Their purpose is to stop me from going to Gujarat,” tweeted Mr Sisodia. “The BJP is scared because it knows it’s losing Gujarat,” he added.

“But my going to jail will not stop the Gujarat election campaign,” he said in a series of tweets.

The federal probe agency has asked the AAP leader to appear before it at its headquarters in Delhi at 11 am today. The agency has prepared a list of questions for the questioning which will be conducted in several phases, sources said. The evidence found so far and the statements of other accused would be placed before the Deputy Chief Minister, they said.

Sisodia, in a video tweeted by him, was seen touching his mother’s feet to take her blessings before leaving for the CBI office. Several AAP leaders, including party MP Sanjay Singh and MLAs Atishi and Saurabh Bhardwaj, were present at his home.

“They had earlier raided my house they found nothing against me and they will find nothing today also. They (BJP) can’t win the election by putting me in jail,” he said.

Large gatherings were banned and a heavy deployment of the Delhi Police personnel were seen around Manish Sisodia’s house. The arrangement was made over the apprehension of party workers gathering outside his house to support him.

Sisodia also made a stop at the AAP office where he addressed a huge crowd of supporters. “They raided my home, nothing came out of it. They went to my village to find anything against him, but they got nothing. Now they plan to arrest me to stop me from campaigning in Gujarat. I am not afraid of CBI, ED (Enforcement DIrectorate) or going to the jail,” he said.

Backing his deputy, Chief Minister Arvind Kejriwal alleged the case against him was “completely fake”.

Reacting to the summons, the AAP claimed on Sunday that Sisodia would be arrested today and alleged the move was initiated in view of the forthcoming assembly elections in Gujarat where it is in a direct contest with the BJP.

The CBI had filed a case in a Delhi court in August against Sisodia and 14 others under various sections, including criminal conspiracy and the Prevention of Corruption Act, which deals with taking undue advantage to influence a public servant by corrupt or illegal means or by the exercise of personal influence. The CBI is investigating if the policy aided liquor cartels.

The party has been accusing the BJP-led government at the Centre of unleashing political vendetta through the case.

Tharoor says he is batting on a tampered pitch
Posting....