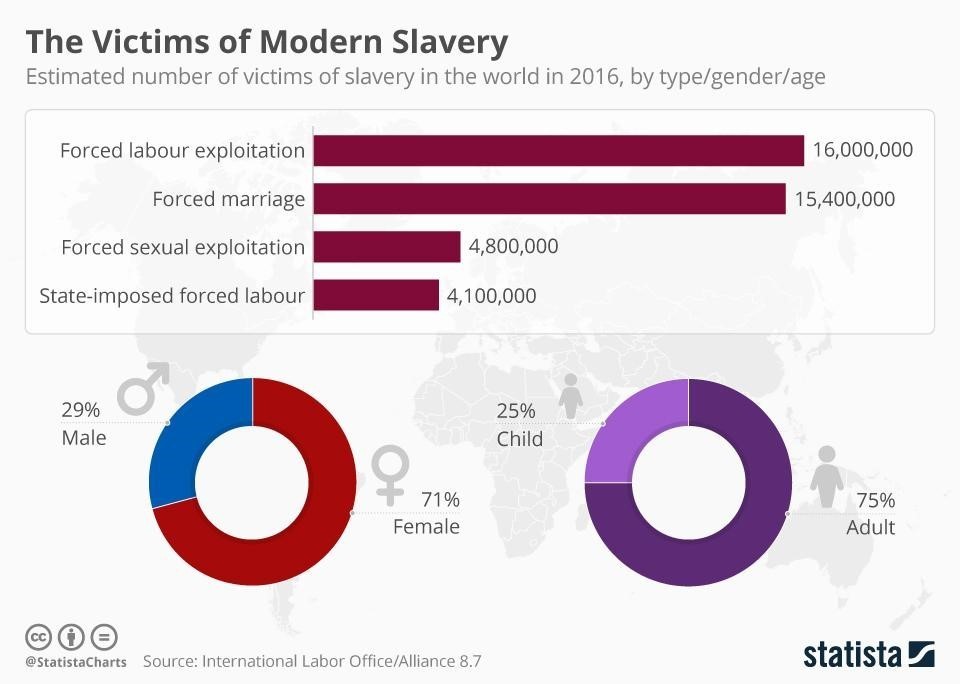 The much-awaited data on modern day slavery has finally been released, which has confirmed our worst of the fears that already shockingly rising trend has further been exacerbated by the COVID-19 pandemic since 2020. The report has special significance for India, since it reveals that most cases of forced labour about 86 per cent are found in private sector with forced commercial sexual exploitation of 23 per cent of all forced labour. Almost four out of five of those in forced commercial sexual exploitation are women or girls. The number people in modern slavery has risen significantly to 50 million in the past five years, which is 10 million more in 2021 than in 2016. Nearly 1 of every 150 people in the world are under modern slavery.

Modi government has been in privatization spree for quite some time and following its selling cheap the public sector enterprises programme while maligning the public sector and praising with plaudits to the private sector. The present report obviously exposes the ignorance of the Centre about private sector as far as modern day slavery is concerned and also point towards the genuine fear of the Central Trade Unions who have been all along alleging that the implementation of the four labour codes in the name of the “much awaited the biggest labour reform in independent India” would bring new era of modern day slavery.

Though the present report has not come with specific data for India, it must be noted that one of the three partners “Walk Free” had long back in 2018 said in its Global Slavery Index, that India had largest number of modern slaves in the world, with vulnerability to modern slavery at 54.49 per cent, estimated proportion of population living in modern slavery 6.1 per thousand and the government response rating was very poor “B”. Since the pandemic has further exacerbated the situation, it can safely be assumed that India must have maintained its unenviable shocking trend. India had about 8 million modern slaves at that time followed by less than half in China (3.86 million) and Pakistan by 3.19 million.

The present report titled “Global Estimates of Modern Slavery: Forced Labour and Forced Marriage” prepared by the International Labour Organisation (ILO), the International Organisation for Migration (IOM), and the international human rights group Walk Free, has revealed that in 2021, some 50 million people globally were living in modern slavery at any given day: 28 million in forced labour and 22 million in forced marriages.

The systemic and deliberate withholding of wages, used by abusive employers to compel workers to stay in a job out of fear of losing accrued earnings, in the most common form of coercion, experienced by 36 per cent of those in forced labour, the report says. This is followed by abuse of vulnerability through threat of dismissal, which was experienced by one in five of those in forced labour. More severe forms of coercion, including forced confinement, physical and sexual violence, and the deprivation of basic needs, are less common but by no means negligible.

Compounding crises – the COVID-19 pandemic, armed conflicts, and climate change – in recent years have led to unprecedented disruption to employment and education, increases in extreme poverty and forced and unsafe migration, and an upsurge in reports of gender-based violence, together serving to heighten the risk of all forms of modern slavery. As is usually the case, it is those who are already in situations of greatest vulnerability – including the poor and socially excluded, workers in the informal economy, irregular or otherwise unprotected migrant workers, and people subject to discrimination – who are most affected.

Since forced labour and forced marriage are two principal components in modern slavery as defined for the purpose of this report, it obviously does not count all forms of slavery of the workforce. We can take Centre’s MGNREGA scheme of India in which payment of less than minimum wages with delay for months was labelled as condition of “modern day slavery” by non less than the Supreme Court of India last year. Though such incidents are not counted in this report, it would be shocking for many that it has mentioned the “state-imposed forced labour” which is about 14 per cent of the total cases globally. The report included forced labour and forced marriage as modern slavery since both refer to situations of exploitation that a person cannot refuse or cannot leave because of threats, violence, coercion, deception, or abuse of power. Almost one in eight of all those in forced labour are children which are about 3.3 million. More than half of these are in commercial sexual exploitation.

We in India have seen the great migrant labour crisis during the COVID-19 pandemic in which hundreds were just perished while returning home, without help from the Modi government that imposed lockdowns without giving them time enough to face the crisis. Now the present report has pointed out that migrant workers are more than three times more likely to be in forced labour than non-migrant adult workers. They are particularly vulnerable not only to forced labour but also to trafficking, because of irregular or poorly governed migration, or unfair and unethical recruitment practices.

António Vitorino, IOM Director-General, said: “This report underscores the urgency of ensuring that all migration is safe, orderly, and regular. Reducing the vulnerability of migrants to forced labour and trafficking in persons depends first and foremost on national policy and legal frameworks that respect, protect, and fulfil the human rights and fundamental freedoms of all migrants – and potential migrants – at all stages of the migration process, regardless of their migration status. The whole of society must work together to reverse these shocking trends, including through implementation of the Global Compact on Migration.”

An estimated 22 million people were living in forced marriage on any given day in 2021. It was an increase of 6.6 million since 2016. India is specifically mentioned in this regard along with 10 other countries of the world, including the two neighbours Bangladesh and Afghanistan. The true incidence of forced marriage, particularly involving children aged 16 and younger, is likely far greater than current estimates can capture, the report has admitted, while clarifying that the present estimates are based on a narrow definition and do not include all child marriages. Child marriages are considered to be forced because a child cannot legally give consent to marry.

“It is shocking that the situation of modern slavery is not improving. Nothing can justify the persistence of this fundamental abuse of human rights,” said ILO Director-General, Guy Ryder. “We know what needs to be done, and we know it can be done. Effective national policies and regulation are fundamental. But governments cannot do this alone. International standards provide a sound basis, and an all-hands-on-deck approach is needed. Trade unions, employers’ organizations, civil society and ordinary people all have critical roles to play.”

Grace Forrest, Founding Director of Walk Free, said: “Modern slavery is the antithesis of sustainable development. Yet, in 2022, it continues to underpin our global economy. It is a man-made problem, connected to both historical slavery and persisting structural inequality. In a time of compounding crises, genuine political will is the key to ending these human rights abuses.” (IPA Service)

Arvind Kejriwal’s Dinner With Auto Driver In Ahmedabad Is A Good News
Posting....