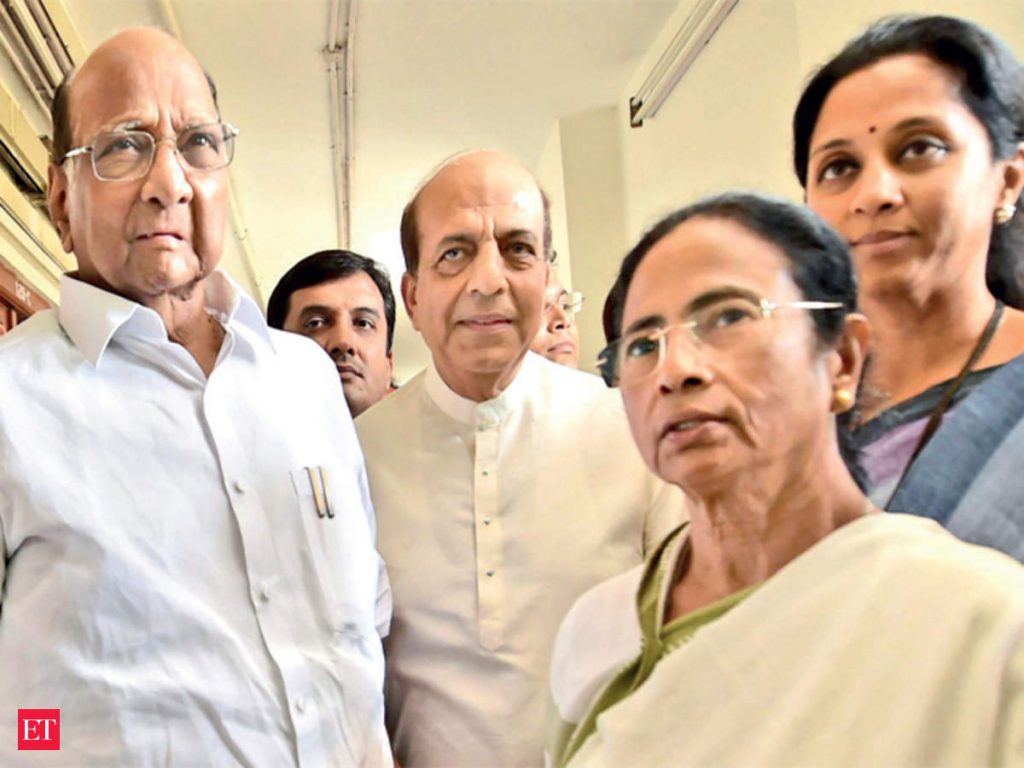 NCP supremo, Sharad Pawar, one of the sharpest and most experienced leaders in Indian politics, is  playing a big role to unite the Opposition in a fight against the  BJP in the five state assembly elections in Uttar Pradesh, Punjab, Uttarakhand, Goa and Manipur. Sharad Pawar on Tuesday slammed Uttar Pradesh chief minister Yogi Adityanath’s 80% versus 20% remark and insisted that communal thoughts must be countered and expressed hope and confidence that this time the people of Uttar Pradesh will vote against the BJP. Sharad Pawar said that his party will contest the coming Uttar Pradesh elections in alliance with the Samajwadi party (SP) even as he claimed that some BJP legislators were set to join Akhilesh Yadav’s party soon. He also said that talks are on with like-minded parties to take on the BJP together in next month’s Goa Assembly elections. While responding to a question on UP minister Swami Prasad Maurya resigning from the BJP and joining the SP, Pawar said, “Thirteen BJP MLAs are going to join the SP.” The NCP will contest five seats in an alliance with Congress in Manipur. Samajwadi Party (SP) on Wednesday named Nationalist Congress Party (NCP) leader KK Sharma as the party’s first candidate for UP assembly elections. The announcement was made on Twitter by the Samajwadi Party after the first joint meeting of the coalition led by the Akhilesh Yadav-led SP. The NCP leader KK Sharma will be the joint candidate of SP-NCP for the Anupshahr constituency of Bulandshahr. The announcement came hours after SP chief Akhilesh Yadav held the first joint meeting of the SP’s alliance partners -RashtriyaLok Dal (RLD), Suheldev Bharatiya Samaj Party (SBSP), Janwadi Party (Socialist), Mahan Dal, Apna Dal (Krishna Patel), and Pragatisheel Samajwadi Party-Lohia (PSP-L) – at the party’s Janeshwar Mishra Trust office in Lucknow. The meeting went on for 3 hours.

The political buzz around the formation of a third front is back. While talk of a third front has been recurrent, the key difference this time is that Telangana Chief Minister K Chandrashekhar Rao had met RJD leader Tejashwi Yadav on Tuesday who flew in to Hyderabad with former RJD minister Abdul Bari Siddiqui, former MLC Sunil Singh and former MLA Bhola Yadav. The meeting which comes after CPI(M) and CPI leaders met KCR and a month after KCR met his counterpart MK Stalin sparked off speculation about the formation of Third front ahead of the 2024 general elections.  BJP winning four Lok Sabha seats from Telangana in the 2019 general elections, including the seat in Nizamabad, where BJP candidate defeated KCR’s daughter, Kalvakuntla Kavitha, and given the recent victory of the BJP in the Huzurabad by-election, the K Chandrashekhar Rao-led TRS is worried. TRS has now come to believe that it is the BJP and not the Congress that’s their main rival in the state. For seven years now, the TRS, headed by Telangana chief minister K Chandrashekhar Rao, has largely voted along with the ruling party in Parliament. The change was evident in the conspicuous presence of the TRS parliamentary party leader, K Kesava Rao, at the meeting of 16 opposition parties at the office of Congress floor leader Mallikarjun Kharge, condemning the suspension of 12 Rajya Sabha members.

With assembly election round the corner in Punjab, the Congress faces infighting over the chief minister post. Chief Minister Charanjit Singh Channi said on Tuesday that the party “should announce” its chief ministerial candidate. “Whenever the party has not announced the CM candidate, it has lost,” he said. He went to say that he was a popular leader and people waved at him and broke barricades to meet him. Channi, however, refused to comment when asked who should be the CM candidate. He said the party would decide that. While Navjot Singh Sidhu said that the people of Punjab would choose the CM, not the party high command. Responding to a question, he was quoted as saying: “Who told you that the high command will make the CM?. People of Punjab will elect MLAs and people of Punjab too will make the CM.” The internal crisis of the Punjab Congress, which has been going on for months tracing back to Captain Amarinder Singh’s resignation as CM, continues and Congress high command is keeping an eye on them and will decide it’s chief minister after  if  the results comes in favour of the party.

Congress General Secretary Priyanka Gandhi Vadra has been reaching out to women voters in Uttar Pradesh in the hope that they would help turn the tides for her party. Meanwhile in the same context the Congress Party on Thursday announced its first list of 125 candidates for the Uttar Pradesh assembly elections, which includes 50 women. Among the candidates were Asha Singh, the mother of the Unnao rape victim, and Ramraj Gond, who had spearheaded the Gond tribals’ legal battle over land in Umbha village in Sonbhadra. The other candidates include Anugrah Narayan Singh, Aradhana Misra Mona, Louis Khurshid Manoj Dixit, Vinod Kumar Bansal and Poonam Pandey, an Asha worker who was allegedly roughed up by the police while trying to meet UP Chief Minister Yogi Adityanath in Shahjahanpur in November last year, and Congress leader Sadaf Jafar, who was in jail in connection with the anti-CAA stir in the state. “Out of the total 125 candidates, 40 per cent are women and 40 per cent are the youth. With this historic initiative, we hope to bring in a new kind of politics in the state,” Congress leader Priyanka Gandhi said in a virtual press conference. She further said the Congress has brought women to centre stage of politics in Uttar Pradesh and no party can ignore them anymore. Priyanka Gandhi Vadra avoided to respond clearly on a question on whether she would contest the assembly polls, but said she would remain in Uttar Pradesh even after the polls and continue to raise issues of people.  Congress leader Rahul Gandhi has hailed the decision to field Unnao gangrape victim’s mother in the polls. He said that “she will win and become the face of justice”. Uttar Pradesh is scheduled to have seven-phase polls beginning on February 10 and ending on March 7. Results will be announced on March 10.

The former Uttarakhand Congress president Kishore Upadhyay interacted on January 3 with Senior Uttarakhand BJP leaders at the residence of BJP organisational general secretary Ajeya Kumar. The BJP election in-charge Pralhad Joshi was also present in the meeting which created a storm in the Congress party as well as in Uttarakhand politics but Upadhyay dismissed the rumour that his meeting had any political motive. Now Kishore Upadhyay has been removed from all party posts on the charge of ‘anti-party activities’, days after he reportedly met senior state BJP leaders. While further action is pending against him, Upadhyay is stated to have expressed discontent at former Congress CM Harish Rawat who is heading the assembly election campaign. Uttarakhand in charge of the Congress, Devendra Yadav in his letter to Upadhyay accused him of continuous anti-party activities and hobnobbing with the BJP and other political parties. Yadav said that despite multiple warnings, Upadhyay indulged in anti-party activities. Upadhyay accused Harish Rawat of having malice towards him  and in turn criticized by telling that Rawat was active in getting him defeated from the Sahaspur assembly seat during the 2017 assembly election.

The political buzz is that BJP MP Rita Bahuguna Joshi may join Samajwadi party if BJP does not consider the name of her son Mayank Joshi from Lucknow Cantt assembly seat. Rita Bahuguna Joshi has been MLA for two consecutive terms from Lucknow Cantt assembly seat.  For the first time while in Congress, he defeated BJP’s Suresh Tiwari from this seat in the 2012 elections. After joining BJP in 2017, she was elected MLA from this seat.  In 2019, she reached Parliament after winning the Lok Sabha elections from Prayagraj.  Now in the assembly elections, Rita hopes that the party will consider the name of her son, but in the meantime the news of Deputy CM Dr. Dinesh Sharma contesting from the said seat is in the headlines.  Due to which there is a discussion that his son can ride on Akhilesh’s cycle. (IPA Service)

Alliance Of Voters Shifting In Uttar Pradesh Against BJP
Posting....