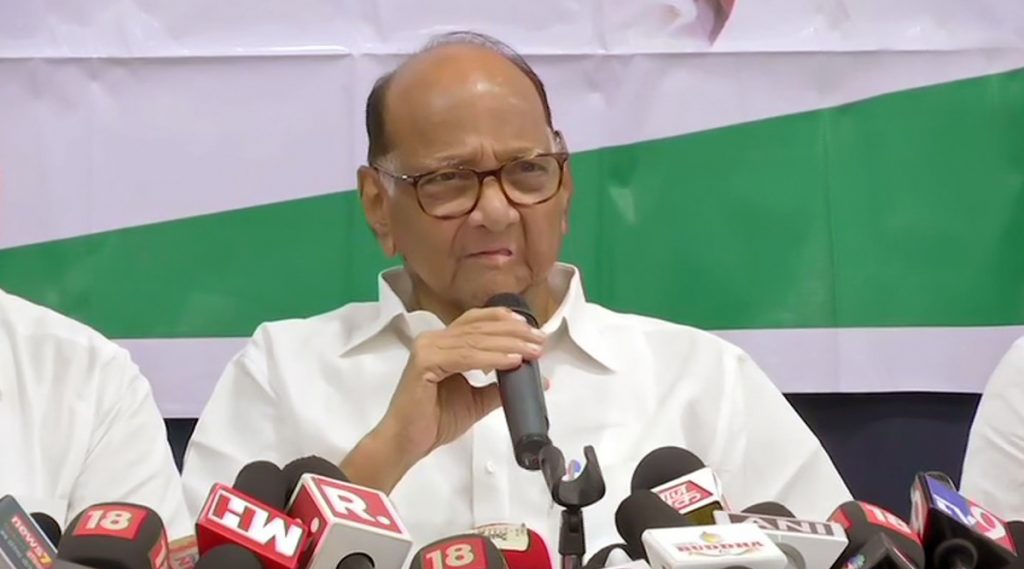 The last time it did, it was to tell that the Baramati powerhouse wasn’t interested; that he could do better at 82 than being relegated to the status of an also ran, especially if it’s Sharad Pawar, who is today the topmost Opposition star in the galaxy.

But it is not charisma that brought Pawar to this peak.

An amalgamation of factors, actually. From Baramati and family to ambition and the right moves made at the right time, to the driving force of a mother at his elbow every inch of the way. Pawar went from force to force in a steady climb up the ladder. From MLA to Chief Minister, to Union Minister.

In ‘Agriculture’ he had no peer till the statistics said otherwise though for the people of Baramati, the Pawar family’s pocket-borough, Sharad Pawar is more transformative than God Almighty. Sharad Pawar is credited for changing the perennially famine-hit Baramati to a prosperous prairie of sugarcane and cooperatives.

Sharad Pawar also has a political party of his own, the Nationalist Congress Party, which somebody uncouth labelled in 2020 as a “variant of the Congress”. By that token, Mamata Banerjee’s Trinamool is also a Congress variant and these days of the deadly coronavirus, there couldn’t be a more wrong choice of word. In fact if the comparison is made today, or a year ago, the uncouth specimen would be counting bars!

In Maha Vikas Aghadi-ruled Maharashtra, Sharad Pawar’s name is taken with a note of caution. Powerful people confirm that Sharad Pawar is undoubtedly the “tallest Opposition leader” in the firmament. Not Mamata. Not Rahul Gandhi. And it is the Congress which wants “Sharad Pawar for President”.

Also, a section of the media, which is not leaving Sharad Pawar alone; asking him the same question every half an hour, “Are you standing for President?” Having a President of your choice hasn’t been the case for so long that the anticipation itself is killing. The 82-year-old Pawar isn’t the boy who doesn’t understand this yearning.

But to expect that such a seasoned politician will not be practical is stupidity. In his long innings, Sharad Pawar has tasted a few setbacks and he knows what he is staring at. Give him a signed bond with success guaranteed embossed in gold on it, and he may agree, but so long there’s uncertainty, no chance will Sharad Pawar throw his hat in the ring.

Sharad Govindrao Pawar is ‘Bhishmapithama’ for the Maha Vikas Aghadi government, and for Maharashtra Chief Minister Uddhav Thackeray, who is the brightest star so far to study in the ‘Sharad Pawar School of Politics’. Will ‘UT’ want to lose Pawar to the Presidential palace on Raisina Hill? And, are presidents of India entitled to school chief ministers, and guide state governments through rain and shine?

Another plus point is that Sharad Pawar runs a tight ship, and that, without ruffling feathers. If the manner in which he brought the MVA together isn’t proof enough, the manner in which he’s built it to a force to reckon with is 24 carat proof. Like somebody keeps repeating, “Pawar is the only power standing between BJP and power in Maharashtra”.

When the book on Sharad Pawar is written, it will all be about political power. And ‘President Pawar’ would be the end-phase of a long, long political story. But that is not stopping the Congress. Leader of Opposition in the Rajya Sabha Malikarjun Kharge met Pawar, carrying a letter from Congress president Sonia Gandhi. The Aam Aadmi Party’s Sanjay Singh telephoned Pawar. Kharge also spoke “Pawar-presidential” with Uddhav Thackeray and MK Stalin. The Congress also reached out to Mamata Banerjee. The importance of Sharad Pawar to the Opposition is unparalleled.

That being said, a couple of more years and the PM’s post could fall vacant! The current incumbent has made a few unforced errors he may live to regret come 2024. One thing can be sure with “Pawar for Prime Minister”, a tiny waffling country like Qatar will not be rolling its eyes to India! That’s the difference between ‘guru’ and ‘shishya’, and it is old news that Prime Minister Narendra Modi has acknowledged Pawar is his “political master”. Then again, “Pawar for President” was still trending in political circles. The presidential election is set for July 18. (IPA Service)