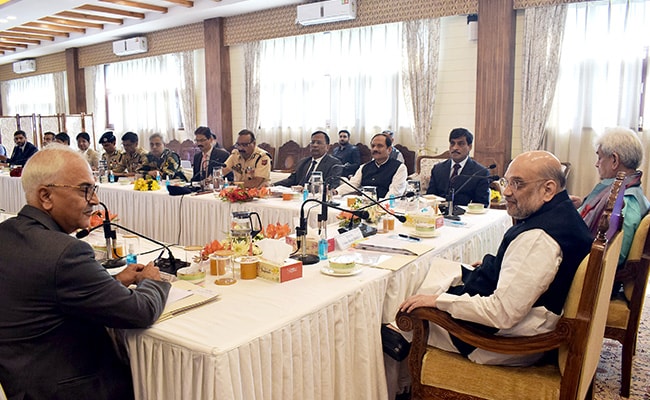 Union home minister Amit Shah ruled out talks with Pakistan today and indicated that the elections in Jammu and Kashmir will be held soon. Speaking to a huge crowd in Kashmir’s Baramulla, Shah said, “I assure you that once revision of revision of electoral rolls is completed, free and fair elections will held in J&K”.

The revision of electoral rolls, which started in August, is due to be over by November 25. There was speculation that the election — the first since 2014 — will be held next year after the winter thaw.

This was Shah’s first public rally in Kashmir Valley after the revocation of special status granted to Jammu and Kashmir under the constitution and the division of the state into two Union Territories.

As thousands were brought to the rally in Baramulla in buses, Amit Shah remarked that he was told no one will attend his rally.

“I was told who will come to listen to you in Baramulla. I’m asking camera persons please turn your cameras and see thousands of people from this beautiful valley have come here” said Shah.

Midway through his speech, when Azaan sounded from a nearby mosque, the home minister halted in a gesture of respect.

“Some people say we should talk to Pakistan. Why should we talk to Pakistan? We will not talk. We would rather talk to Gujjars, Paharis and the youth of Kashmir,” Shah said.

He also blamed Farooq Abdullah (leader of National Conference), Mehbooba Mufti (PDP leader ) and the Nehru-Gandhis for the underdevelopment of Jammu and Kashmir. He also said terrorism thrived under their rule and even blamed them for Pulwama attack of February 2019 in which 40 CRPF personnel  were killed.

.@HMOIndia@AmitShah ji says “Gupkar model gave us Pulwama attack.” Just to remind everyone that Pulwama attack happened when J&K was under central (BJP) rule with their handpicked Satyapal Malik running the state from Raj Bhavan. https://t.co/xtmfNe1GrM

The Home Minister said  the Narendra Modi government does not tolerate terrorism and wants to wipe it out. “We want to make Jammu and Kashmir the most peaceful place in the country,” he said.

While the administration was busy making arrangements for the Home Minister’s rally in Baramulla, Mehbooba Mufti had a twitter spat with the police after she was kept under house arrest and not allowed to visit Pattan in Baramulla district.

The police had issued a traffic advisory and allowed only vehicles carrying people attending the rally to enter Baramulla.

As the home minister was addressing the rally, a civilian was killed in police firing in Pulwama. Police said it was an accidental fire by a policeman.

In Shopian, there were back-to-back encounters, in which four terrorists, all locals, were killed, the police said.