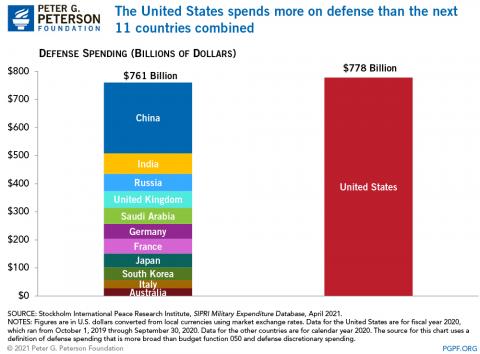 The Russian attack on Ukraine seems to have given a wakeup call to countries in Europe and Asia to substantially step up their annual defence expenditure to protect themselves from possible external assault. Given the ominous security situation in Europe, a number of countries, including Germany, Sweden, Romania, Latvia, Finland, the Netherlands and Belgium have raised their defence expenditure for 2022. Germany heads the list with chancellor Olaf Scholz allocating an additional Euro 100 billion (US$110.65 billion) for the country’s armed forces, more than doubling its last budget of Euro 47 billion. He said the Russian invasion of Ukraine was a “turning point in the continent’s history”. Latvian President Egils Levits said that while the European Union (EU) remains one of the most important economic players globally, it is a “midget” in political terms. The EU has been significantly underspending on defence and the military.

Some are believed to be even considering the possibility of going unclear as India and Pakistan did in the 1970s.  Building nuclear weapons from scratch takes time. After testing its first nuclear bomb in 1974, India took over two decades to build a nuclear arsenal and delivery system capable of military deployment. Pakistan started its nuclear weapons programme in 1972 under the then energy minister Zulfiquar Ali Bhutto, who later became the country’s president and prime minister. Interestingly, in 1993, South Africa surprised the world by announcing that it had built nuclear weapons in the 1980s, before dismantling its arsenal. For the first time, a country outside of the elite world powers had obtained nuclear capabilities while keeping matters a secret from almost everyone else. For countries such as Germany, Japan, Israel and Iran, it may not take long to develop weapons of mass destruction and their delivery system.

In Asia, several countries are planning to raise their defence budgets in the face of possible aggression by China, the world’s third largest military power boasting a big stockpile of nuclear arms. Following the unchallenged invasion of Ukraine by Russia, countries in the Asia-Pacific region are fearing a similar attack on Taiwan by China to get the disputed island annexed in due course. Japan is highly concerned about such a development. Japanese Prime Minister Fumio Kishida has already hinted at a large hike in defence spending. Former Japanese prime minister Shinzo Abe had repeatedly vowed to strengthen his country’s defences as Japan feared China’s unilateral attempt to change the status quo in the region — including Taiwan and the disputed Senkaku Islands. The uninhabited Senkakus are believed to be rich in oil and gas deposits. According to observers, a control of the islets by Beijing would give China a strategic foothold that could stymie US and Japanese military operations in the Western Pacific.

China, Pakistan, Iran and Saudi Arabia are already among the big Asian spenders in defence. Of them, both China and Pakistan — currently two strong military allies after Pakistan broke away from the US camp — are nuclear armed. It may be a matter of time before Shiite Iran too becomes a nuclear power to the chagrin of US-protected Saudi Arabia, the powerful propagator of Sunni religion, and Israel. Sunni-majority Pakistan state is close to Saudi Arabia. West Asia’s power politics appear to be most complex with the US, Russia, China and Pakistan seen as dominant strategic policy influencers.

Lately, Saudi Arabia and the UAE refused to back the US against Russia in Ukraine. The Gulf Royals even declined to take calls from President Biden amid fears of oil price spike. Iran — a friend of China — has long enjoyed strategic relations with North Korea. After the Soviet Union’s disintegration, Iran expanded its oil exports to North Korea in exchange for technological assistance for its missile and nuclear programmes. Encouraged by the success of Scud-B attacks during the Iran-Iraq War, Iran collaborated with North Korea throughout the 1990s in the development and procurement of increasingly longer-range ballistic missiles. New-found ties between China and Pakistan, former US strategic partner and an original member of US-led security block called central treaty organisation (CENTO), could be the most confusing military alliance in the region, specially for India and Iran. All the countries in the region, except probably India, are spending huge sums to bolster their military fire power.

China’s military spending in 2022 is expected to be over four times that of India’s and nearly 3.5 times that of Russia. The annual defence expenditure of Russia is around US$70 billion as per the Trading Economics global macro models and analysis projections. The Ukraine war is bound to raise Russia’s defence spending.  China officially announced its defence budget of Yuan 1.45 trillion (US$229.5 billion) for the current year before its National People’s Congress (NPC) on March 5. Janes, the trusted source of defence intelligence, estimates China’s defence budget to be $58 billion more than the official figure, making the total to US$287.8 billion.

A ‘work report’ issued at the NPC by Premier Li Keqiang said the increase is aligned with China’s military goals. These include the target to achieve “military development” by 2027, the 100th anniversary of the founding of the People’s Liberation Army (PLA), and “military modernisation” by 2035. It is generally believed that China’s actual military spending is substantially higher than what is announced in public. However, it may not be anywhere near the US, the world’s biggest military spender. Last year, the US Senate passed a roughly $770-billion defence expenditure bill for 2022.

In contrast, India’s military spending is really small considering its geographical size, population and growing challenges from China and Pakistan. Its defence budget for 2022-23 is only US$54.20 billion, excluding the defence pensions. It is primarily focused towards the upkeep and modernisation of operational armed forces. India’s total defence spending, including pensions, for 2022-23 is projected at US$70.6 billion, representing a 9.8 percent increase over last year. In 2018, India’s parliamentary (Lok Sabha) standing committee on defence had recommended that the country’s defence spending should be equivalent to three percent of its GDP. In reality, it is below two percent. Even smaller European countries spend around 2.5 percent of their GDP on defence. With  belligerent China in the north along a 3,488km-long land border and malicious Pakistan in the west sharing 3,310-long border with India, the country needs to double its defence expenditure to reasonably protect itself against possible external aggression.

India must invest big in defence to match China’s firepower. The Russia-Ukraine war once again proved that self help is the best help. Ukraine is fighting its own battle after its western allies refused to directly fight against Russia. Frustrated Ukrainian President Volodymyr Oleksandrovych Zelenskyy, who expected physical support from the US and other NATO powers, lashed out at western leaders for failing to come to his country’s rescue from Russian ‘atrocities.’ The Ukrainian president blamed ‘western politicians’ for inaction after shelling killed fleeing civilians. India too has few dependable strategic allies which will fight for India in case of a full-blown war in the South Asian region. India certainly needs to build a strong defence for itself and will to win. (IPA Service)