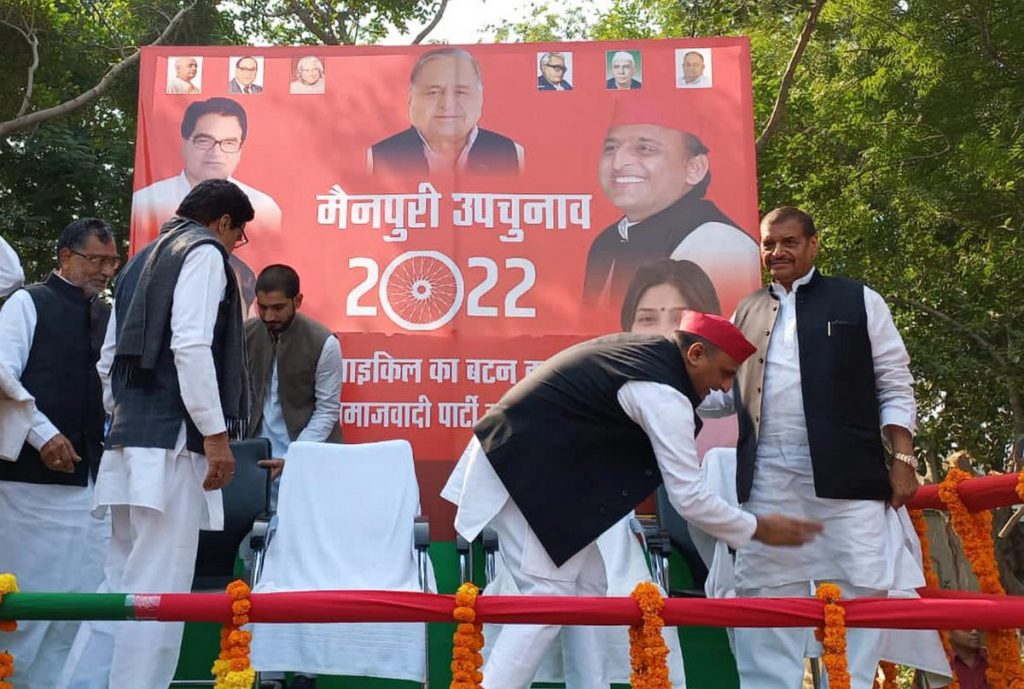 Aware of the serious implications on his political future of the results of Mainpuri by-polls for Lok Sabha, Akhilesh Yadav has mobilised the support of his family and party leaders to retain the seat won by his father Mulayam Singh Yadav who recently passed away.

It would be word mentioned here that Shivpal had formed his own party following differences with his nephew before 2017 assembly polls and was responsible for defeat of Samajwadi Party candidates in many constituencies.

This time Akhilesh realised the ground reality that it would be difficult to contest the election with the support of uncle and ensure victory of his wife Dimple Yadav who is Party candidate.

Shivpal Singh Yadav is playing the emotional card by saying that he was campaigning following request from his daughter-in-law Dimple Yadav and it was his duty to ensure her victory.

At the same time Shivpal Yadav announced in election meeting that after the death his elder brother Mulayam Singh Yadav his son Akhilesh. Yadav should be called as Chhote Neta Ji. It be mentioned here that Mulayam Singh Yadav was known as Netaji in political circle.

Akhilesh Yadav has mobilised the entire family and senior leaders including party MPs, MLAs and others to campaign for his wife Simple who had earlier been Lok Sabha MP twice from Kannauj and Firozabad.

On the other BJP has also put-up serious challenge before Dimple Yadav by fielding former MP Raghuraj Pratap Singh Shakya as party candidate.

Shakya had twice been MP from Itawah on Samajwadi Party ticket and was very close associate of Shivpal Singh Yadav.

BJP is also aware that Mainpuri is dominated by Yadav community and is continuously represented by Samajwadi Party in Lok Sabha since 1996.

BJP campaigned in Mainpuri is led by chief minister Yogi Adityanath who blamed Samajwadi Party leaders for the lack of development of the area.

Akhilesh Yadav said that since the decisions were taken by the Cabinet so they were prepared to face the inquiry and other consequences.

The presence of dalit voters and their mood in the crucial by-poll will also very important role in deciding the fate of candidates.

There is every possibility that Mayawati may attempt to transfer her party votes in favour of BJP candidate.

In the absence of Congress and BSP candidate there is a direct election between Samajwadi Party and BJP and the result of this prestigious Lok Sabha constituency in Yadav land will decide the mood for forthcoming general elections in 2024. (IPA Service)

India’s GDP Growth Has Slowed Down But Overall, The Trends Are Positive