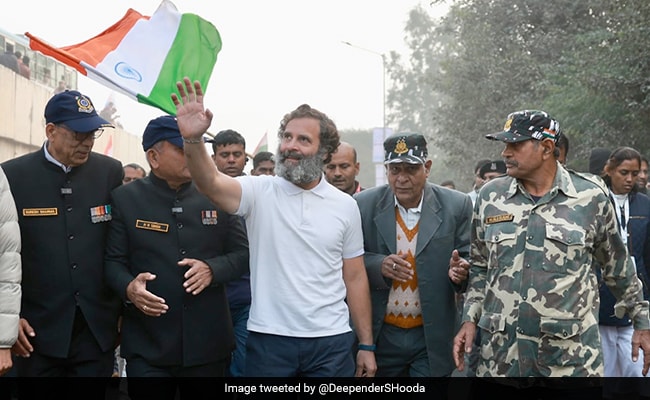 Rahul Gandhi has been advised by security agencies to not walk certain stretches during the Bharat Jodo Yatra in Kashmir, NDTV has learnt.

“A detailed plan has been put in place to secure him and it has been advised that he should avoid travelling certain stretches on foot and instead travel in car,” a senior official told NDTV.

A compressive security review is still going on in which details about night halts are being worked out, the official added.

The 52-year-old Congress leader is set to hoist the national flag in Banihal on January 25 and would be entering Srinagar via Anantnag two days later – on January 27.

“Rahul (Gandhi) will unfurl tricolour en route to Kashmir. As of now it seems it would be around Banihal. Then yatra would enter Srinagar via Anantnag a day after republic day,” the official said.

According to him, security agencies want only handful of people to travel with Rahul Gandhi when he is in Srinagar.

As per plan, Rahul would enter Lakhanpur on January 19 and after a night halt there, will proceed from Kathua’s Hatli Morh next morning. It will again halt for the night at Chadwal. On the morning of January 21, it will start from Hiranagar to Duggar Haveli, and proceed from Vijaypur to Satwari on January 22.

“Some stretches are sensitive so we have advised his team to identify people who would be in the inner cordon with him,” a source told NDTV.

Last month, the Congress had asked the Centre to enhance his cover as many security breaches were noticed along the yatra route.

The Centre, while replying to the Congress, had stated that Mr Gandhi himself had breached his security cover over 100 times since 2020.

in Happening Now
Feb 4, 2023   ·
Follow us on
Up Next: BJP Isolated In Meghalaya As Ruling NPP Decides To Contest Solo