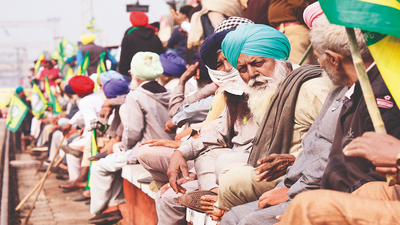 The first phase of farmers agitation of India was called off on December 11, 2021 after the three controversial farm laws were repealed fulfilling the chief demand of the Samyukta Kisan Morcha. However, the other demands including guaranteed Minimum Support Price (MSP) remained unfulfilled even after one year. Farmers are feeling cheated by the false promises of the Modi government and therefore started the second phase of farmers’ agitation from November 26 by organizing their march to governors across the country. Farmers’ organisations would again meet on December 20 to decide the further course of their agitation.

The memorandum of demands submitted by the SKM has added three new demands – loan waiver for farmers, pension for farmers above 60 years of age, and crop insurance – to the existing demands of guaranteed MSP for crops, and cancellation of all cases registered against the farmers during their agitation, and justice for Lakhimpur Kheri victims killed allegedly by a Union Minister’s son’s vehicle running over them.

The first phase of farmers agitation was begun in the first week of August 2020 just after passage of the three controversial farm laws. A call to Delhi March on November 26 was given, and the farmers assembled were barricaded on the three borders of Delhi, where they started their sit-in protest on the very day, thus making the official beginning of the historical farmers protest in the independent India. The agitations was called off on December 11, 2021, but only after the Union government had promised to fulfill all the justified demands of the agitating farmers. Over 750 farmers had died during the year-long farmers’ agitation.

It should be recalled that a promise was given by the Prime Minister Narendra Modi in a televised address on November 19, 2021 on the occasion of “Guru Parb” to repeal the three controversial farm laws. He had even lamented his government’s inability to convince farmers of the law’s advantages. Subsequently on November 29, both the Houses of the Parliament of India passed the Farm Laws Repeal Bill, 2021 by voice vote and two days later the bill was signed by the President of India.

The SKM protest march on November 26, 2022 has been organised to mark the day when the agitation started on the Delhi borders in 2020. SKM has said that the members of 32 farmers’ organisations are participating in this march to governors across the country. SKM has said that even a year later, the Union government’s stand over our demands, on which they had agreed on paper, are yet to be implemented.

As for the demand of legal guarantee on the MSP, the SKM has said that the Union government is not ready to consider this demand. Union government has rather offered government’s committee to decide on it, but SKM has rejected the offer seeing the government’s unbending stand on the issue.

The SKM leaders have yet again demanded justice for the five people – four farmers and one journalist – killed last year in Lakhimpur Kheri, and also sacking of the Union Minister of State for Home Affairs Ajay Kumar Mishra, whose son Ashish is the prime accused in the case.

SKM’s chief demand includes Legally guaranteed Minimum Support Price; Freedom from indebtedness through a comprehensive loan waiver scheme; Withdrawal of Electricity Amendment Bill 2022; Dismissal and legal action against Union Minister of State for Home Affairs Ajay Mishra Teni; Comprehensive and effective crop insurance scheme to speedily compensate farmers for crop loss due to natural calamities; Pension of Rs 5,000 per month to all marginal, small and medium scale farmers and agricultural workers; Withdrawal of all false cases registered against farmers during the agitation against now repealed farm laws; and Payment of compensation to families of all farmers who died during agitation.

Presently, SKM has said, the demand for legal guarantee for MSP is the biggest struggle. Farmers across the country are behind this demand since it is essential for their survival.

Uttar Pradesh, Madhya Pradesh, Odisha, Karnataka, Uttarakhand, Punjab, and Haryana were chief among the states where farmers observed the Rajbhawan March of November 26, 2022.

SKM leaders are reaching out to people for their support. They have also given the Union government different options to make farming less onerous for farmers. They have even asked to make proper arrangement to reduce input costs in farming. Farmers’ unions are meeting on December 8, to decide on the course of agitation and its form. Statements of leaders of various farmers’ union indicate that they are ready to lead the second phase of agitation to its logical conclusion.

The second phase of farmers’ agitation is going to be more complicated in the context of the March 21, 2022 release of the report of the high-powered expert panel constituted by the Supreme Court that said 86 per cent of the farmer organisations representing 38.3 million farmers supported the farm laws. The panel said that they received over 19,000 representations from various groups, and on the basis of that they have concluded that the repeal and long suspension of farm laws would be unfair to the silent majority of farmers. The report was actually submitted to the Supreme Court on March 19, 2021. The agitating farmers had criticised the constitution of the Committee on the ground that it included some persons who were already know for favouring the laws and SKM did not participate in the Committee. (IPA Service)