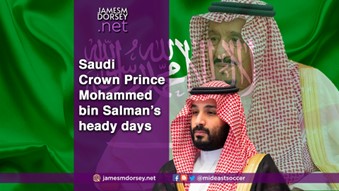 These are heady days for Saudi Crown Prince Mohammed bin Salman. With King Salman home after a week in hospital during which he had a colonoscopy, rumours are rife that succession in the kingdom may not be far off.

Speculation is not limited to a possible succession. Media reports suggest that US President Joe Biden may visit Saudi Arabia next month for a first meeting with the crown prince.

Biden called Saudi Arabia a pariah state during his presidential election campaign. He has since effectively boycotted Bin Salman because of the crown prince’s alleged involvement in the 2018 killing of journalist Jamal Khashoggi in the Saudi consulate in Istanbul.

Bin Salman has denied any involvement but said he accepted responsibility for the killing as Saudi Arabia’s de facto ruler.

Bin Salman waited for his 86-year-old father to return from the hospital before travelling to Abu Dhabi to offer his condolences for the death of United Arab Emirates President Khaled bin Zayed and congratulations to his successor, Mohamed bin Zayed, the crown prince’s one-time mentor.

Bin Salman used the composition of his delegation to underline his grip on Saudi Arabia’s ruling family. In doing so, he was messaging the international community at large, and particularly Mr. Biden, that he is in control of the kingdom no matter what happens.

The delegation was made up of representatives of different branches of the ruling Al Saud family, including Prince Abdulaziz bin Ahmed, the eldest son of Prince Ahmed bin Abdulaziz, the detained brother of King Salman.

Even though he holds no official post, Abdulaziz’s name topped the Saudi state media’s list of delegates accompanying Bin Salman. His father, Ahmed, was one of three members of the Allegiance Council not to support Bin Salman’s appointment as crown prince in 2017. The 34-member Council, populated by parts of the Al-Saud family, was established by King Abdullah in 2009 to determine succession to the throne in Saudi Arabia.

Bin Salman has detained Ahmed as well as Prince Mohamed Bin Nayef, the two men he considers his foremost rivals, partly because they are popular among US officials. Ahmed was detained in 2020 but never charged, while Mr. Bin Nayef stands accused of corruption. Mr. Ahmed returned to the kingdom in 2018 from London, where he told protesters against the war in Yemen to address those responsible, the king and the crown prince.

Abdulaziz’s inclusion in the Abu Dhabi delegation fits a pattern of Bin Salman appointing to office younger relatives of people detained since his rise in 2015. Many were arrested in a mass anti-corruption campaign that often seemed to camouflage a power grab that replaced consultative government among members of the ruling family with one-man rule.

Bin Salman likely takes pleasure in driving the point home as Mr. Biden mulls a pilgrimage to Riyadh to persuade the crown prince to drop his opposition to increasing the kingdom’s oil production and convince him that the United States remains committed to regional security.

The crown prince not only rejected US requests to help lower oil prices and assist Europe in reducing its dependency on Russian oil as part of the campaign to force Moscow to end its invasion of Ukraine but also refused to take a phone call from Biden.

Asked a month later whether Biden may have misunderstood him, Bin Salman told an interviewer: “Simply, I do not care.”

Striking a less belligerent tone, Mohammed Khalid Alyahya, a Hudson Institute visiting fellow and former editor-in-chief of Saudi-owned Al Arabiya English, noted this month that “Saudi Arabia laments what it sees as America’s wilful dismantling of an international order that it established and led for the better part of a century.”

Alyahya quoted a senior Saudi official as saying: “A strong, dependable America is the greatest friend Saudi Arabia can have. It stands to reason, then, that US weakness and confusion is a grave threat not just to America, but to us as well.”

The United States has signalled that it is shifting its focus away from the Middle East to Asia even though it has not rolled back its significant military presence.

Nonetheless, Middle Eastern states read a reduced US commitment to their security into a US failure to respond robustly to attacks by Iran and Iranian-backed Arab militias against targets in Saudi Arabia and the UAE and the Biden administration’s efforts to revive a moribund 2015 international nuclear agreement with Iran.

In one instance, Mr. Bin Salman reportedly shouted at Sullivan after he raised Khashoggi’s killing. The crown prince was said to have told the US official that he never wanted to discuss the matter again and that the US could forget about its request to boost Saudi oil production.

Even so, leverage in the US-Saudi relationship goes both ways. Biden may need Saudi Arabia’s oil to break Russia’s economic back. By the same token, Saudi Arabia, despite massive weapon acquisitions from the United States and Europe as well as arms from China that the United States is reluctant to sell, needs the US as its security guarantor.

Bin Salman knows that he has nowhere else to go. Russia has written itself out of the equation, and China is neither capable nor willing to step into the United States’ shoes any time soon.

Critics of Biden’s apparent willingness to bury the hatchet with Bin Salman argue that in the battle with Russia and China over a new 21st-century world order, the United States needs to talk the principled talk and walk the principled walk. (IPA Service)

Modi Government Is Still Making All Efforts To Retain Section 124A
Posting....