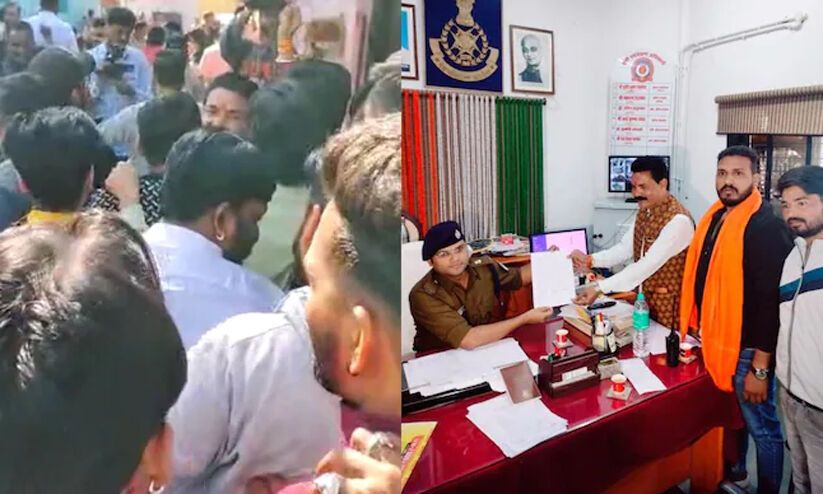 With the Christian community across the   country raising its voice against the rightist forces perpetrating torture and victimising the community members and planning the strategy to expose the Hindutva bigots, the RSS, which like its earlier imitative to win over the trust of the Muslims, is scheming to reach out to the Christians for forming a new association ‘Save our Nation India’ with their cooperation.

The RSS has decided to trudge on this path following growing disenchantment amongst the Christians and their move to rope in the support of the global fraternity in their protest against the mischievous designs of the Hindutva bigots.. Jharkhand has been the worst affected state. According to Christian organisations, Jharkhand is rated as the 4th most dangerous state Uttar Pradesh, Tamil Nadu and Chhattisgarh, according to Persecution Relief, a missionary organisation based at Bhopal in Madhya Pradesh and working for Christian rights. The report claimed that 293 cases of crimes against Christians have taken place nationally in the first half of 2020 (January-June) despite a nationwide lockdown since March 25, which is a staggering 40.87% hike compared to 208 incidents in 2019.

The anti-Christian forces are so aggressive and asserting that they are not scared of the secular  coalition government. The primary targets of these marauders have been the converts. The 27-year old Kande Mudu was killed by a group of religious fanatics as he and his family had accepted Christianity four years ago. Bindu Mudu, his wife and his two daughters fled the village for fear of being attacked and their whereabouts are unknown.

Few months back the Supreme Court had asked the Ministry of Home Affairs (MHA) to submit reports from Uttar Pradesh, Haryana, Karnataka, Madhya Pradesh, Odisha, Chhattisgarh and Jharkhand on alleged attacks on Christian institutions. This directive has put the MHA on back foot. Instead of committing that the MHA will protect the adivasis, the Solicitor General Tushar Mehta tried to provide cover to MHA by alleging that the majority of the alleged cases mentioned in the PIL were false and based on “self-serving articles” published on a web portal. The PIL was filed by Rev Dr Peter Machado of National Solidarity Forum, Rev Vijayesh Lal of Evangelical Fellowship of India and others alleging violence against the Christian community in India.

The most surprising has been the stand of the MHA on this issue. In an affidavit filed in response to a PIL, the MHA alleged they were perhaps seeking to get assistance from outside to meddle with the internal affairs of India. “…there appears to be some hidden oblique agenda in filing such deceptive petitions, creating unrest throughout the country and perhaps for getting assistance from outside the country to meddle with internal affairs of our nation,” the MHA said, accusing the petitioners of resorting to “falsehood” and “self-serving documents”. It said the reports cited to show Christian persecution were either “false” or “wrongfully projected”.

Senior advocate Colin Gonsalves, appearing for the petitioners, alleged that in majority of the attacks against the members of the Christian community, there is a pattern, and are being done with the connivance of police authorities. He argued that in most cases Christian priests have been booked by police and attackers allowed to go scot free. He said; “In the last one year, more than 700 cases of violence against the members of Christian community have been reported”.

Besides the incidents of coercion that continue to take place in Jharkhand, the Christian missionaries are most worried of increasing repression on the community members in Karnataka. The Christian community has already expressed resentment about the anti-conversion law and expressed concerns at the possibility of misusing them to target anyone engaged in humanitarian work. Akhila Bharath Christha Mahasabha sought police protection across Karnataka as the past year witnessed several instances of members of Sangh Parivar outfits barging in and disturbing prayers alleging forced conversions of Hindus.

They submitted a memorandum to the director-general of police but the saffron activists continue to perpetrate their coercion. The Christians fear that in future more attacks would take place on the community, the places of worship and events like Christmas carols. The anti-conversion law has only made things difficult. The BJP government led by Basavaraj Bommai had initially taken the ordinance route to enforce The Karnataka Protection of Right to Freedom of Religion Ordinance, 2022, in May. But later an act passed in September   this year replaced the ordinance.

Latest report of the United States Commission for International Religious Freedom (USCIRF) underlined that the policies like anti-conversion laws create a ‘culture of impunity’ for harassment and violence towards religious minorities, particularly Muslims and Christians. It said that religious freedom conditions in the country “remained poor”.

In this report, the body accused the Modi government of continuing to “suppress critical voices—particularly religious minorities and those advocating on their behalf” through surveillance, harassment, demolition of property and detention under the Unlawful Activities Prevention Act (UAPA) and by NGOs under the Financial Contribution (Regulation) Act (FCRA).

Giving examples, the commission described the arrest of Alt News co-founder Zubair as based on a 2018 tweet “perceived to insult Hindu religious beliefs”, while human rights activist Setalvad was arrested for allegedly fabricating evidence implicating PM Narendra Modi in the 2002 Gujarat riots. “Journalist Siddique Kappan remains in jail despite the Supreme Court granting him bail in September 2022. He was arrested in Uttar Pradesh in October 2020 while on his way to cover a rape case of a Dalit girl that sparked nationwide protests,” USCIRF’s report noted.

The commission further claimed that it has received “credible reports” that members of Hindu “vigilante” groups and other such hardline groups threaten and use violence, including sexual assault, to “punish or subdue religious communities”. Victims are usually Dalit Christians and Muslims.

On its part HinduPACT, an initiative of the World Hindu Council of America, in a statement alleged that the USCIRF has been taken over by “Indophobic and Hinduphobic members”.

Nonetheless in its 2021 report the World Watch List (WWL) has clubbed India with ten other countries where Christians are the most persecuted for following Jesus. The other countries are North Korea, Afghanistan, Somalia, Libya, Pakistan, Eritrea, Yemen, Iran and Nigeria. India remains in the top 10 for the third year in a row because it “continues to see an increase in violence against religious minorities due to government-sanctioned Hindu extremism.”

Yet another organisation Open Doors noted:“Amidst a surge of Hindu nationalism, Indian Christians are constantly pressured by strident propaganda. The message ‘to be Indian, you must be Hindu’ means mobs continue to attack and harass Christians, as well as Muslims. The belief that Christians are not truly Indian means widespread discrimination and persecution is often conducted with impunity. India also continues to block the flow of foreign funds to many Christian-run hospitals, schools and church organizations, all under the guise of protecting the Indian national identity.”

Jharkhand Janadhikar Mahasabha, a coalition of human rights bodies, has accused the security forces of unleashing violence on tribals in a village in West Singhbhum and abusing them during a search operation for Maoists. It said ‘Inhumane and illegal behaviour towards adivasis during search operation is wholly against spirit of Constitution and democracy’. A fact-finding team of the Mahasabha, that had visited the site claimed ;“The security forces beat up adivasis (including women), abused a girl with the intention of raping her, and destroyed people’s belongings. The forces entered the house of Noni Kui Jojo, an elderly widow, and flung her belongings around the house. Two jawans held her adolescent daughter Shanti Jojo’s hands and a third jawan molested her. They wanted to drag her towards the bushes but she somehow managed to escape. The jawans then brutally beat up Noni Kui when she refused to let go of her daughter. Shanti Jojo told the factfinding team that the manner in which she was abused clearly indicated the jawans’ intention of raping her”.

“The victims submitted written applications at many levels but neither has any action been taken against the perpetrators nor have the victims received any compensation. The investigating officer continues to avoid getting the testimony of the victims registered,” claimed Ramesh Jerai, a member of the team and a resident of Chaibasa.   The persecution of Christians, especially the poor tribals, continues at the hands of Sangh Parivar. (IPA Service)

Decoding Preeti Banerjee, The Music Icon Of IPTA On Her Centenary Year