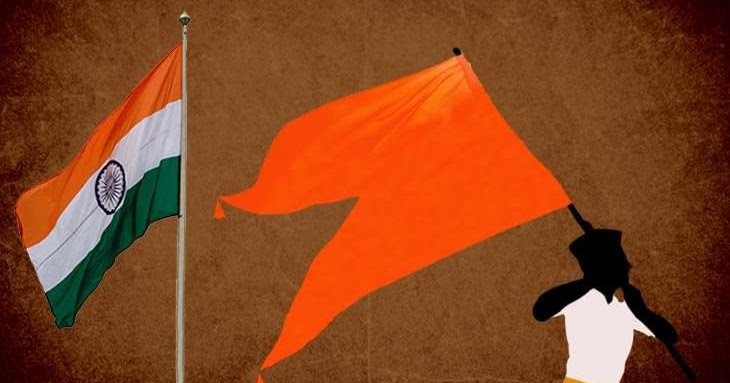 At the 75th year of Independence, India witnesses unusual initiatives from BJP, the ruling party. They are taking extra pains to exhibit their loyalty to the national freedom struggle and the National Flag. Anyone with a little understanding of history knows that neither the BJP nor its predecessors who form part of the RSS-led parivar had no role in the freedom movement, which was immensely inspired by the tricolour. All those forces committed to the RSS theory of cultural nationalism kept aloof from the national struggle for freedom. They branded it as a political exercise, nothing of concern for their cultural organisation.  Adamantly reluctant they were, even to touch the National Flag.  RSS and its followers were never seen near the mass upsurge aroused by the flag of freedom.

Decades after country’s independence, they were not bothered about their approach supportive to the interests of the British imperialism. When the whole population of free India celebrated August 15 and the tricolour, they remained unmoved. For long 52 years after independence, RSS-BJP had never thought of unfurling a National Flag anywhere near their offices. They were having their own peculiar interpretations.  Now, at the call of a newly found wisdom, RSS and BJP seem hyper enthused to champion the celebration of National Flag.

The Prime Minister himself made an appeal to the people to begin the Independence Day celebrations on August 13th itself. On July 22ndhe was keen to tell the people that it was on the same day in 1947 that the tricolour flag was approved as India’s National Flag. The Prime Minister wanted all the Indians to hoist National Flag on each house. Several festivities to celebrate the National Flag was planned by the government. The flag code of India was suitably amended to manufacture tricolour flags in huge numbers. It is reported that polyester cloth was imported from China in huge quantities to make the smooth availability of Indian flag. Prime Minister Narendra Modi and his proven skills are doing their rounds to write a new history of India’s freedom struggle.  The purpose of rewriting history is to dig and hide the real facts and to magnificently project a new history of BJP’S choice.

The tricolour found its place in the heart of India since 1931, when the Congress during the freedom struggle adopted a flag with three colours as the symbol of its national honour.  The objection of the RSS to the tricolour flag was aired by their founding leaders from the very beginning.  Hedgewar and Golwalkar stood in the forefront of the RSS tirade against the National Flag.  They were preaching for a saffron flag with ‘Om’ at its centre. They argued that their flag represented India’s cultural ethos.

According to them, the saffron flag prevailing in India’s temples, right from the time of Mahabharat should be the natural choice for the country.  In January 1931 when the Congress made the appeal to hoist tricolour, the RSS came out openly against it. Hedgewar, the first Sir Sangh Chalak issued a directive among all its sakhas to hoist Bhagwa Bhwaj instead of tricolour. All along its history RSS was eager to uphold a parallel view regarding the national movement and the difference on National Flag was paramount for them.

On July 14th, 1946, at a congregation of Swayam Sevaks in Nagpur, Golwalkar exhorted:”It was the saffron flag which in totality represented Bharatiya culture. It was the embodiment of God. We firmly believe that in the end, the whole nation will bow before the national flag.”  In an essay titled ‘The Eternal Basis’, included in ‘Bunch of Thoughts’, Golwalkar wrote “for example our leaders have set up a new flag for our country.  Why did they do so? It is just a case of drifting and imitating……… how did this flag come into being.

During the French revolution, the French put up three strips on their flag to express the triple ideas of ‘equality’, ‘fraternity’, and ‘liberty’…Three strips therefore held a sort of fascination for our freedom fighters also….So it was taken up by the Congress. Then it was interpreted as depicting the unity of various communities — the saffron colour for the Hindus, the green for the Muslims and the white for all other communities.  Out of the non-Hindu communities, the Muslim was specially named because in the minds of most of the eminent leaders, the Muslim was dominant and without naming him they did not think that our nationality could be complete!”

In the above communally charged venomous misinterpretation, the RSS approaches to the tricolour is evident.  They consciously close their eyes to the real and patriotic ideas represented by the tricolor. Educated and trained by the philosophy of hatred, they always kept a sort of vengeance towards the National Flag.  Its colours signify the unity and diversity of Indian society. The cultural, natural and philosophical beauty of the values embraced by a great people of a great nation is imbibed into the national flag.  RSS-BJP was always keeping an emotional and political distance with the ethos represented by the national flag.

In Nagpur, at the headquarters of RSS, they hoisted a tricolor only in 2002 when A B Vajpayee became the Prime Minister of India. On several occasions BJP leaders were showing disrespect to the national flag violating the flag code of India. During the final rites of Kalyan Singh, former Chief Minister of UP and Governor of Rajasthan, the National Flag was seen half covered by the BJP flags. None of the top brass of the RSS-BJP, including the Prime Minister was concerned about this flagrant violation. Now the people see them singing praise for tricolor day and night.  The reasons are known to them. The RSS-BJP have their saffron dreams which for the time being, they want to cover by the tricolor.  For them everything is meant for propaganda sake. Nation, national ethos, National flag all are being projected with only one purpose – political games and clinging to power!