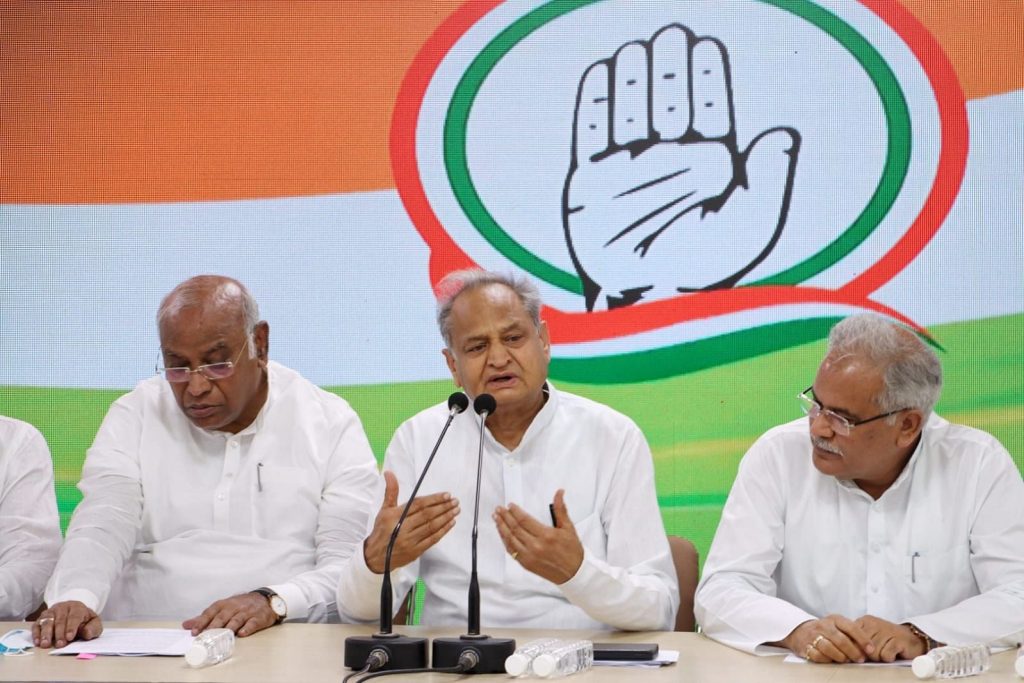 As simple as that. Mainstream TV news channels often call the anti-corruption crusader to open sesame on 10 Janpath. It’s like the religious police is let loose on the unsuspecting citizenry in certain countries on certain days to vent their ire at the breach of the religious code. Other days they stew in their quarters. Just like anti-corruption crusader does on days when 10 Janpath is not the headline.

The last couple of days, the Congress has been under siege, its headquarters held at bay behind barricades as were the official residences of Sonia Gandhi and Rahul Gandhi. Is this how it looks, a Congress-mukt Bharat? The police cracking their whip, eager to do the bidding of thy masters? Police ringed 10 Janpath. And police ringed 12 Tughlak Lane. Interestingly, 12 Tughlak Lane occupant Rahul Gandhi wasn’t in town. He was in Karnataka, basking in being a ‘Lingayat’ in the poll-bound state. Only the other day, Rahul Gandhi had in a Facebook post asked people not to “panic”, that they had the Congress’s back.

This, after the ED sealed the National Herald office in Delhi’s Fleet Street Bahadurshah Zafar Marg. To tell a coincidence, the last Mughal Emperor also had to face the brunt of the British Raj. It makes one wonder if Rahul Gandhi is also being subjected to the same treatment? Makes one ask, does the BJP and the Modi regime consider Rahul Gandhi a threat to its Congress-mukt project?

Like the anchor asked the courtroom anti-corruption crusader, “Are we in the final leg of Operation Congress-mukt Bharat?” The answer was a high-pitched laugh, but the remains of the day spoke volumes. Prime Minister Narendra Modi couldn’t care less, the quicker the better. And it wasn’t National Herald or Young Indian, it was every Indian with an opinion and a vote.

The question was asked by a news TV channel: “Which party would you vote for if elections were held today”? The answer fetched the BJP 326 seats, and the Congress+ only 97! But the BJP doesn’t seem convinced. Gujarat and Karnataka aren’t making the right noises. If the AAP has the BJP tied down by freebies; Karnataka appears to be falling in love with Rahul Gandhi. Scenes there aren’t behind a hijab to escape notice.

You don’t not need to be a psephologist to know the BJP could be lost to an AAP tsunami in Gujarat, exactly like the Congress in the Punjab. Now, the Supreme Court has been involved in a reckoning of the “freebies culture”. And the rising prices are pinching the BJP in both feet. So much so, it appears like it has hired the services of the Delhi Police to bail it out.

The Delhi Police, before it sent platoons of lathi-waving constables to ring 10 Janpath and 12 Tughlak, issued a diktat to the Congress to cancel its August 5 protest on the question of price rise. How is the price rise related to the National Herald? Even the Enforcement Directorate, which sealed the Young Indian office, wouldn’t have a clue.

The ED questioned Congress president Sonia Gandhi in July and Rahul Gandhi in June. Some of the questions were leaked to the media, but apart from those, to date nobody knows what the ED gained from holding to ransom the valuable time of busy politicians planning to unseat the current dispensation at the Centre.

Everybody knows the Modi Government “owns” the ED, and the Delhi Police. But while the ED behaves like police, it isn’t police. The Delhi Police, on the other hand, is the police working under the direct control of the Union Home Ministry. And it’s not just the Congress, even police forces of opposition-ruled states are harassed, like the West Bengal CID, which came to investigate the Jharkhand cash-car affair.

So, this is how it is: The ED seals the Young Indian office. The Delhi Police writes to the Congress to cancel its August 5 price rise protest. This is followed by a police siege of 10 Janpath and 12 Tughlak Lane. The optics fit the intention; they also speak of brute power of the police state.

At least, that is how it looks. The August 5 protest included laying siege to the Prime minister’s residence. Who panicked and who is playing dictator are both the same. The name of the game is intimidation. We will lock you up, in the office or behind bars, is the message. India is a nation of the young and the young of India are witnessing the antics of a police state, it’s the dividend they get, it’s the dividend they have been getting. (IPA Service)

Sangh Parivar And BJP Have No Right To Talk Of Tiranga Celebrations
Posting....