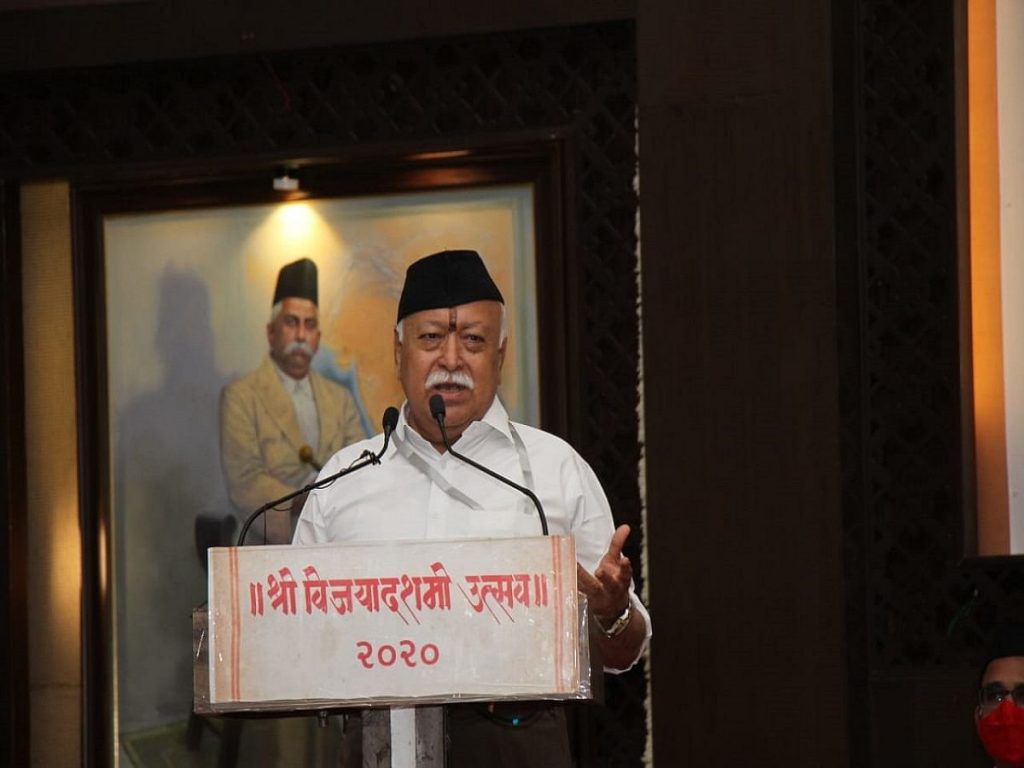 RSS ‘sarsangchalak’ Mohan Bhagwat thinks he speaks for the Hindus of India, and AIMIM solo head Asaduddin Owaisi wouldn’t be given a chair to sit by the vast majority of Muslims. But Bhagwat can’t get it round his head, and the AIMIM head refuses to heed his head that Muslims look on him as a maverick best left to his own devices. So, Bhagwat has asked Hindus to not go looking for a “shivling” under every mosque, and Owaisi has termed Bhagwat’s intervention “incendiary”, and totally “unacceptable”.

The ruling Bharatiya Janata Party scoffed at Owaisi, calling him a barrister without a case, and Bhagwat’s intervention nothing short of genius, the “masterstroke” reserved for the longest of time to Prime Minister Narendra Modi. Everything Modi says or does is a “masterstroke” for the so-charged “bhakts”, and for the so-shamed “Godi media”, a tribe which cannot stop quoting Bhagwat on “gyanvapi”.

Jokes apart, the Hindu bloc considers Mohan Bhagwat’s comments on “mandir and masjid” blatantly out of context, especially the “don’t go looking for a Shivling under every mosque” part. The RSS sarsangchalak’s fatherly advice hasn’t found takers among the saffron-clad “sant samagam”. Give him time and he will come around was their consensus when told that the RSS has refused to be part of any “andolan” on the issue henceforth.

Yes, talk that the RSS will not be the face of future places of worship acts of the Sangh Parivar is drawing laughs. If that’s what it’s going to be, won’t the VHP and Bajrang Dal join the ranks of the unemployed? Another wisecrack? Asaduddin Owaisi refuses to agree. The AIMIM think-tank is all over TV comparing the RSS sarsangchalak’s invitation to reconciliation to an attempt at snatching victory from the jaws of deceit!

Owaisi doesn’t trust the “forked tongue” of the “fascist RSS”. He is 100 percent sure the VHP and the Bajrang Dal have been outsourced the task of finding “shivlings” under mosques. But that is not Owaisi’s chief grouse. His disapproval is that Bhagwat keeps referring to Indian Muslims as belonging to the same Hindu stock. Owaisi is livid that Bhagwat refuses to stop spreading the “canard” that Islam “came to India from outside the subcontinent”.

This goes against Owaisi’s pet theory that Muslims and Islam are indigenous to the subcontinent and, if the RSS will still not give up its rant, then “let’s go back 65,000 years, or better still, to Adam, who was Muslim and does not find mention in Hindu religious books.” Owaisi is intransigent, like the religion he belongs to. He doesn’t want reconciliation, not until Bhagwat declares “Indian Muslims don’t have Hindu DNA”.

But is Mohan Bhagwat even listening? Bhagwat’s let’s not dig up the 30,000 mosques said to be built over demolished temples doesn’t include Gyanvapi, and the Idgah mosque in Mathura. The too clever by half man that he is, the RSS chief is a master of the unspecific, leaving that should be said unsaid. The Gyanvapi affair is in court, and nothing that Bhagwat preaches will affect the course of the “gyanvapi andolan”.

Owaisi thinks so, too. The AIMIM’s most assertive voice is adamant “I will not lose another of my mosques. I was 18 or 19 when you snatched Babri masajid from me, not another one if I can help it, Gyanvapi masajid tha, masajid hai aur masajid rehega”. There is no fighting such stubbornness in any man, and Owaisi’s rhetoric is finding resonance among more and more Muslims.

Bhagwat’s olive branch, for whatever it’s worth in truth and honesty, started wilting from the moment he held it out; perhaps, in the hope that he’ll be hailed as the “quintessential Hindu”, the tolerant Hindu, the giving Hindu, the bighearted Hindu. Bhagwat couldn’t have been more wrong. Owaisi is not impressed and the ignited Hindu feels cheated.

Social media has had enough of the bleeding heart Hindu. But not the Bharatiya Janata Party. In fact, it’s become difficult to conclude which of the two, the Rashtriya Swayamsevak Sangh or the Bharatiya Janata Party is setting the mosque-mandir agenda? Is “let’s not look for a shivling under every mosque”, Mohan Bhagwat’s “masterpiece”, or is it Prime Minister Narendra Modi’s “masterstroke”?

The view always was that the RSS commands, and the BJP obeys. But two consecutive stints of Modi rule, both with “brute” majorities, had fostered talk that Prime Minister Narendra Modi held the upper hand, and Mohan Bhagwat was HMV. And as if to prove this right, Owaisi says he will be satisfied only if Prime Minister Narendra Modi himself comes on record and says “no more looking for shivlings under mosques”.

Owaisi knows this won’t happen. Prime Minister Narendra Modi is anything but a generous Hindu. He’s a politician, a keen one at that. Present him a skullcap, and he’ll ask for a 12 gallon Texas hat! It’s more than likely that RSS chieftain Mohan Bhagwat was talking through Modi’s hat when he said let’s put a stop to looking for ‘shivlings’ under mosques. (IPA Service)

Congress Win In Thrikkakara Bypoll Is A Big Boost To The Party And UDF
Posting....