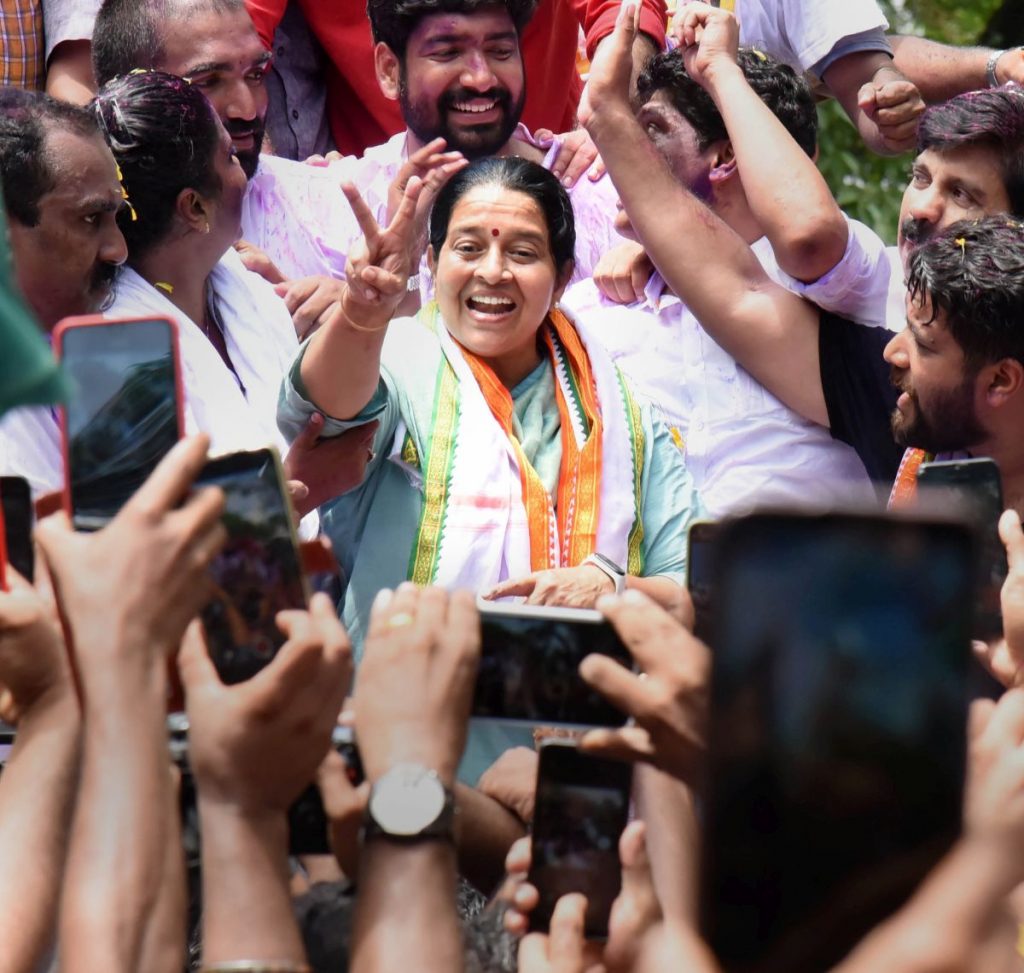 THIRUVANANTHAPURAM: It is celebration time for the Congress and the party-led united Democratic front (UDF) after a long drought of election victories. The Congress has just scored a spectacular victory in the Thrikkakara assembly by-election with its candidate Uma Thomas defeating CPI(M)’s Dr Jo Joseph by a record margin of 25,016 votes. The by-election held on May 31 was necessitated by the death of Congress MLA P T Thomas.. The results were announced on June 3.

The Congress and the UDF are savouring the heady scent of victory after debilitating defeats in the local body and assembly elections. It has come as a booster shot for the party, which sees it as the beginning of the revival of the party’s fortunes in the State where it is still a force to be reckoned with.

In the process, the Congress has denied the Left Democratic front(LDF) a chance to score a ‘century’ in the assembly. The LDF has a strength of 99 in the State Assembly. But then, Thrikkakara has always been a Congress stronghold. The UDF has not lost an election since the formation of the constituency in 2011. Incidentally, the victory margin of Uma Thomas, wife of PT Thomas, is the highest in the constituency, overtaking Benny Behnan’s 22,313 in the 2011 assembly polls. It is also higher than PT Thomas’s victory margin of 14,329 votes in 2021.

However, BJP candidate A N Radhakrishnan came a distant third polling only 12, 955 votes, 2526 less than the party’s tally in 2021. BJP also lost its deposit as it failed to poll even 10 per cent of the total votes. BJP stgate3 president K Surendran will find it hard to explain the poor show of the party.

A close look at the factors which contributed to Uma’s stunning victory is in order. First and foremost, Uma benefited hugely from the sympathy factor generated by the untimely death of PT Thomas. The victory is a recognition of the good work done by PT. The absence of a Twenty20 candidate this time also helped Uma in a big way. The 13,000 odd votes polled by the Twnety20 last time went, almost en bloc to the Congress. Besides, the decline in BJP’s vote also helped her, a section of the party’s vote going her way.

Congress leaders are, understandably over the moon. But they must not allow themselves to be carried away by the euphoria. One swallow does not make a summer. True, nobody grudges the party its moment of joy. But the Congress and the UDF have miles to go before they can seriously challenge the CPI(M)’s organizational might and strength. Thrikkakara is just a beginning of the revival of the Congress and the UDF. Much will depend on how the party conducts itself in the wake of the poll win.

Enthused by the victory, Kerala Pradesh Congress Committee (KPCC) president K Sudhakaran has demanded the resignation of Chief Minister Pinarayi Vijayan. But leader of the opposition (LOP) V D Satheesan sang a different tune. He said he would not seek the resignation of the CM as it is only a by-election victory. That is a more realistic assessment of the situation. One this is clear. The victory has strengthened Satheesan’s position in the party. As Congress MP Hibi Eden rightly said, the credit for the victory goes to Satheesan, who led the election campaign by camping in the constituency. The enhanced clout of Satheesan may not be to the liking of old stalwarts like Oommen Chandy and Ramesh Chennithala. The new leadership of the Congress in the state – KPCC chief Sudhakaran and LOP VD Satheesan — have well and truly tightened their grip on the party.

On the other hand, the CPI(M)-led LDF does not have to worry too badly about the outcome. The party conducted a no-holds-barred campaign led by the Chief Minister himself. But the voters of Thrikkakara chose to support the wife of PT. It was an emotional attachment to him, and the voters refused to be swayed by the campaign blitzkrieg unleashed by the LDF and its accent on development. In other words, the heart ruled over the head in the by-election.

This being the ground reality, the LDF need not take the defeat too much to heart. The party and the LDF tried its level best to wrest the Congress bastion but failed. It can still draw comfort from the fact that it has increased its votes by over 2200 votes; and its vote share has gone up from 33 per cent in 2021 to 35 per cent. The UDF victory cannot be termed as a referendum on the Government’s performance either.

But the LDF must indulge in serious introspection. It must identify the reason why it failed to poll a higher number of votes despite a never-seen-before campaign. Perhaps the LDF made a big mistake in the manner it chose the candidate. No doubt, Dr Jo was a popular person and well known in the constituency. But the way he was projected did not go down well with the voters of Thrikkakara. The normal practice is to introduce the candidate at AKG Bhavan, the CPI(M) headquarters. This time, however, Jo was introduced at a hospital owned by a Christian group. That opened the front to the charge of an uncharacteristic pandering to the communal sentiments. A stronger candidate like advocate Anil Kumar or M. Swaraj would have put up a better fight.

CPI(M) state secretary Kodiyeri Balakrishnan said the party would – and should – analyse the verdict and take corrective action. The people are not against development. But development riding roughshod over the feelings and sentiments of the affected populace would backfire. There is no denying the fact that the manner in which the Government went ahead laying survey stones for the SilverLine project angered a sizable section of the people. The anger reflected in the result.

The fact that the LDF could lead only in 21 booths out of a total of 239 in Thrikkakara is self-explanatory. Development with a human face and only after taking the people into confidence. That should be the mantra of the party and the Government in future. The setback is not as serious as is being made out by the pro-UDF press. But be vigilant and respect the sentiments of the people while taking important decisions. That is the powerful message delivered to the Government by the voters of Thrikkakara. And both the CPI(M) and the Government should do well to imbibe the message. (IPA Service)

By Pradeep Kapoor LUCKNOW: Samajwadi Party national president Akhilesh Yadav is responsible for the defeat of his party candidates in Azamgarh and Rampur. Since Azamgarh...

By Anjan Roy The continuing crisis in Maharashtra shows a clear dichotomy between the political class and the people. The rank and file of the...

New Delhi Holds Its Own On Discounted Oil Imports From Russia
Posting....