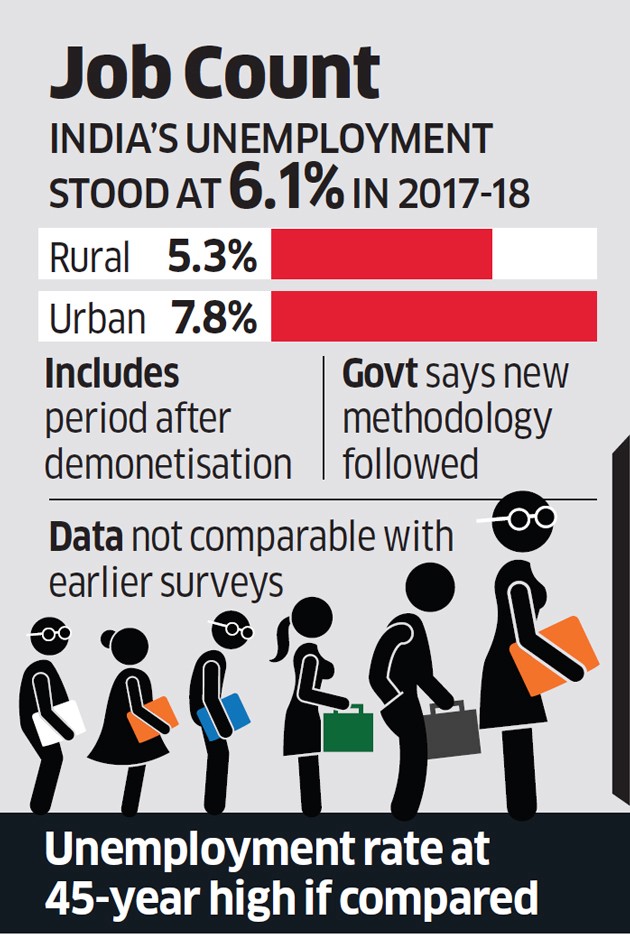 It is a matter of great concern that for the country’s millions of educated youth, degrees and certificates have become as useless as wastepapers as they fail to provide jobs and help brighten their future. Going by the official records, in the academic year of 2018 about 64.7 lakh students passed out of undergraduate courses and over 20 lakh passed out of post-graduate disciplines. These include conventional three-year degree courses and professional degrees (law, engineering, medicine, business and management courses).

Every year, almost 10 to 14 lakh engineers graduate from Indian educational institutions. The number of all students to graduate this year could be well over 1 crore. Unfortunately, there are not many jobs awaiting for these freshers. The pressure on the limited job market for freshers multiplies as millions of young graduates and postgraduates enter the arena every year looking for employment — suitable or unsuitable for their knowledge and educational qualifications.

The situation looks even more grim for those who look for jobs on completion of board level examinations under state education departments for want of money and adequate marks to pursue with under-graduate studies, including short-term technical courses. The number of students passing the central and state school board examinations every year runs into several crores. More than 50 percent of those opt for jobs. The most preferred of them are the government-aided primary school teacher’s jobs.

Even that is not easy to get.  Under the National Council for Teacher Education, a statutory body of the union government, to be a teacher in state-funded elementary primary schools one must have senior secondary school certificate or its equivalent and diploma or certificate in basic teachers’ training of a duration of not less than two years. The salary offered is a little over Rs.13,000 per month. According to reports, these jobs are far too few compared to their demand. They lead to highly corrupt recruitment practices, including bribery and political alignment.

The Union Ministry for Human Resource Development (MHRD) does not routinely release the figures of school-passed students from states, especially those passing Class X and Class XII examinations. In the state of Gujarat, 14.03 lakh students had enrolled for state-level board examinations in 2021. In Maharashtra, the number was close to 20 lakh, including 3.7 lakh students from Mumbai. The number of such candidates in West Bengal was over 10.79 lakhs. India has as many as 28 states and eight union territories.

The Central Board of Secondary Education (CBSE) figures are, however, easy to find out. In 2022, over 20.93 lakh students had appeared for CBSE Class X board examinations alone, of whom 19.77 lakhs — or 94.4 percent — passed. The pass-out rate in most states is above 90 percent. During the Covid-hit period of 2020-21, state education boards decided to ‘pass’ all examinees. Few really care to know what this massive number of school-passed boys and girls have been doing after leaving their schools and how many of them have been looking for jobs and with what results.

According to MHRD, the country’s student population in higher education grew by 800,000 in 2018-19, compared to the previous year’s counts, taking the absolute number of such students to 37.4 million. Every year, nearly 1.5 lakh medical students pass out and get their MBBS degree. While some go for post-graduate studies, others join mostly the public health service or private hospitals and nursing homes. However, engineers are not so lucky. Unofficial reports say that 20 to 33 percent of qualified engineers are either jobless or engaged in sundry work. Nearly, 1.5 million engineers passing out every year run the risk of not getting a job at all.

Recently, Raghuram Rajan, a professor of finance at the Chicago Booth School of Business and former Reserve Bank governor, said the high unemployment rate in India is a real danger, especially for the lower-middle-class, as it creates room for “entrepreneurial politicians who cater to these divisions” rather than focussing on actually enhancing jobs. He expressed concern over India’s jobless growth and said tensions could grow in India if minorities including Muslims and women are not part of strong, sustainable and equitable growth. “If we focus on just the Indian growth number right now, we’re not doing too badly apart from the dramatic plunge during the pandemic but if you add in that the women’s labour force participation is worse than in Saudi Arabia — people don’t believe me when I say this — these are pressing issues that need to be solved,” he added. Incidentally, at the secondary school level, girls represent around 50 percent or more of the passed-out students every year.

Both the central and state governments have hopelessly failed to provide quality education to children — right from the primary school level. Further, the governments have ignored the need for linking education with jobs. The country’s poor education and job-training systems have made education certificates and degrees practically worthless. In several national surveys, employers felt that less than half the college graduates entering the workforce have the cutting-edge skills they need. The haphazard economic growth despite the so-called populist slogan of ‘self reliance’ helps little to job seekers. Uneven industrial progress among states and constant migration of labour have totally distorted the job market where freshers are hardly wanted. The situation is leading to growing frustration among the youth. It would be wrong to ignore the trend as this could be a potential for nation-wide social unrest at some stage.

Under the circumstances, it is difficult to say if the present high level of youth population in India is to the advantage or disadvantage to the country. To sustain world-beating growth and woo global investors, the government needs to ensure there’s a trained workforce for industry to draw on. India needs to create at least 90 million new non-farm jobs by 2030, according to a   McKinsey Global Institute report. The national government has announced plans to recruit a million people by the end of 2023 to fill vacancies in its various departments. The youth are so hungry for jobs that the government’s controversial programme to enlist young men as soldiers on four-year frill-free contracts lured a record number of applicants in its very first week, despite the backlash from the opposition parties. The government says the programme will help boost employment by supplying a trained, disciplined workforce to local industry.

Ironically, the mushrooming private sector jobs are mainly in the gig economy, such as drivers for Uber, or delivery workers for Zomato or Amazon. A Niti Aayog report hopes the Indian gig economy will have 23.5 mn workers by 2029-30. Non-platform gig workers are generally casual wage and own-account workers in conventional sectors, engaged part-time or full-time. To create quality jobs on a mass scale the country needs to boost manufacturing which hinges on creating infrastructure, removing red tape and reviving investor sentiment.  With national polls barely two years away, the opposition parties are already talking about a labour market crisis. (IPA Service)

Row over Speaker attributing to TN progress to Christians