Rising Cases Of Covid-19 In The Country Bring New Concerns 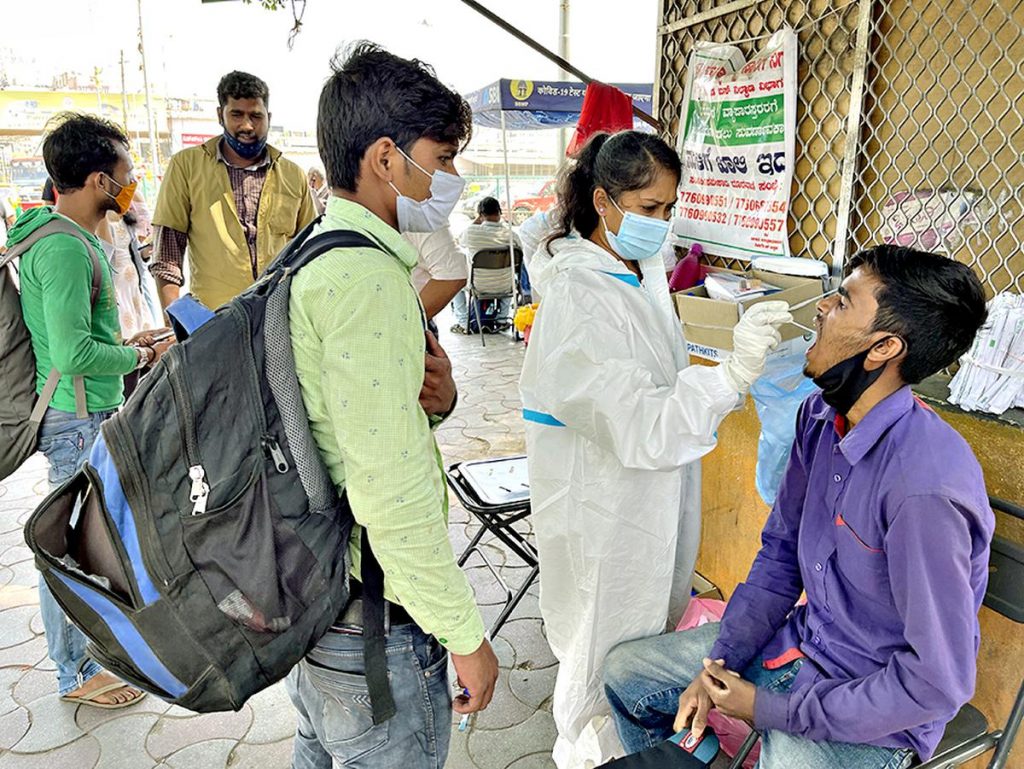 India has achieved yet another milestone in vaccination when it exceeded 200.33 crore as per provisional reports from across the country till 7AM on July 19. However, this alone should not be a matter of complacency either on part of the government or the people of this country, since the newest Omicron variant BA.2.75 first found in early June in India is spreading fast within the country and also across the world. It has now been found in 15 countries making the World Health Organization (WHO) to put it on the watch list, saying that the COVID-19 threat is not yet over.

Weekly positivity rate is presently at 4.57 per cent in the country, while there were around 16,000 new cases. Cause of concern is that cases continued to inch up in the country for the 8th week running, from around mid-May. Weekly total was around 1.3 per cent, up over 6 per cent from previous week. It was the longest sustained rise in weekly cases since the second wave in 2021. Deaths from the virus at the present rate of rise is likely to18 per cent up from the preceding week. Cases are rising in 27 states. Some experts believe it to be early sign of the fourth wave, if business-as-usual approach continues while others emphasize it not be an alarming condition.

Even so, since India has suffered three COVID-19 waves and has lost about 48 lakh lives according to the new WHO data that was almost ten times the official data of the country, we should beware of the fourth wave. The statement of the chairman of the Covid Working Group N K Arora should not bring us complacency over the milestone achieved, since the new variants, the present or of the future, tend to be potentially powerful evading the immunity created either by natural infection or vaccination.

So far about 150 cases are due to the newly emerged BA.2.75 Omicron variant, Mr Arora said, which shows lack of alertness on the part of the government towards the threats Indians are facing on account of the pandemic. Though he defended his view by saying, “There are reclassification issues and hence the correct number is yet to be ascertained. The bottom line is that vaccines have worked against these sub-lineages and, so far, no increase in deaths or hospitalization has been seen.”

The data, Mr Arora has given about the BA.2.75 Omicron variant is far less than that is tracked by the Arkansas State University. As of July 17, its data shows about 320 patient spread around 16 states and UTs of India, with most infected states being Maharashtra (84), West Bengal (81), Delhi (49), Karnataka (25), Uttar Pradesh (17), Haryana (15), Gujarat (12), and Telangana (10). Infections from this variant in Rajasthan, Tamil Nadu, Chandigarh, Madhya Pradesh, Chhattisgarh, Himachal Pradesh, Jammu and Kashmir, and Ladakh are still in one digit.

The countries infected with this variant now include United Kingdom, USA, Australia, New Zealand, Japan, Canada, Indonesia, Israel, Germany, Nepal, China, Denmark, France, Luxembourg, Martinique, the Netherlands, Thailand, and Turkey. Even on July 7, WHO Director-General has said in his opening remarks at the Member State information Session on COVID-19 and other issues, “A new sub lineage of Omicron called BA.2.75 has also been detected, which we’re following closely.”

WHO-DG’s remark must be taken note of since he said that reported cases of COVID-19 have increased nearly by 30 per cent over the past two weeks. Four out of six of the WHO sub-regions saw cases increase in the last week. In Europe and America, BA.4 and BA.5 are driving waves.

Mr Arora has merely said that both the BA.4 and BA.5 variants have not been able to spread rapidly as vaccination coverage was high and worked well. Omicron BA.5 sub-linage is driving the surge in the US and Europe. However, in India, Mr Arora said, it is less than 10 per cent. He added that high vaccination coverage and immunity due to natural COVID-19 infection protected Indians from the severe effects of the Omicron variant. The BA.2 Omicron variant continues to be the dominant one in the country resulting in 85 per cent of the cases, while 33 per cent of the cases are due to BA.2.38 he said.

Mr Arora has said that the aim of the government is to target everyone who is eligible to get a precautionary dose. “In the days to come, the government will take various initiatives to make vaccines available at doorstep, so that the eligible population gets covered. … The government has been able to eradicate polio by taking several initiatives. Similar mode will be adopted to make sure that it is made easier for all those who are eligible for the third dose.”

His statement should not be taken on its face value, since it does not present the actual position on the ground. It is some sort of boasting since, during the pandemic about over 38 lack children and infant remained unvaccinated since the government agencies did not care to vaccinate the children jeopardizing their survival. This government’s performance in saving children by administering life saving vaccines and allowing them to thrive is thus very poor, making the country most unsafe for largest number of children in the world. COVID-19 vaccination for adults and adolescent is good but children’s safety must not be casualty in the name of COVID-19 measures. Success in one type of vaccination cannot veil failure in 13 types of life saving vaccination for infants and children below 5 years of age.

Though the present situation with respect to the newest Omicron variant BA.2.5 in not a cause for alarm, but it is definitely a variant “to be watched” as the WHO admits. However, the challenges are compounding for India, and elsewhere in the world as the WHO-DG has said while enumerating them as –

First, testing has reduced dramatically in many countries. This obscures the true picture of an evolving virus and the real burden of COVID-19 disease globally. It means that treatments are not given early enough to prevent serious illness and death. Second, new treatments, especially promising new oral antivirus, are still not reaching low- and low-middle income countries, depriving whole populations that need them. Third, as the virus evolves, vaccines protections – while still really effective at preventing serious disease and death – does wane. Decreasing immunity underscores the importance of boosters, especially for the most at-risk. And Fourth, each wave of the virus leaves more people with a post-COVID condition, often referred to as long-COVID. Health systems are strained, and economies and societies are being disrupted. (IPA Service)