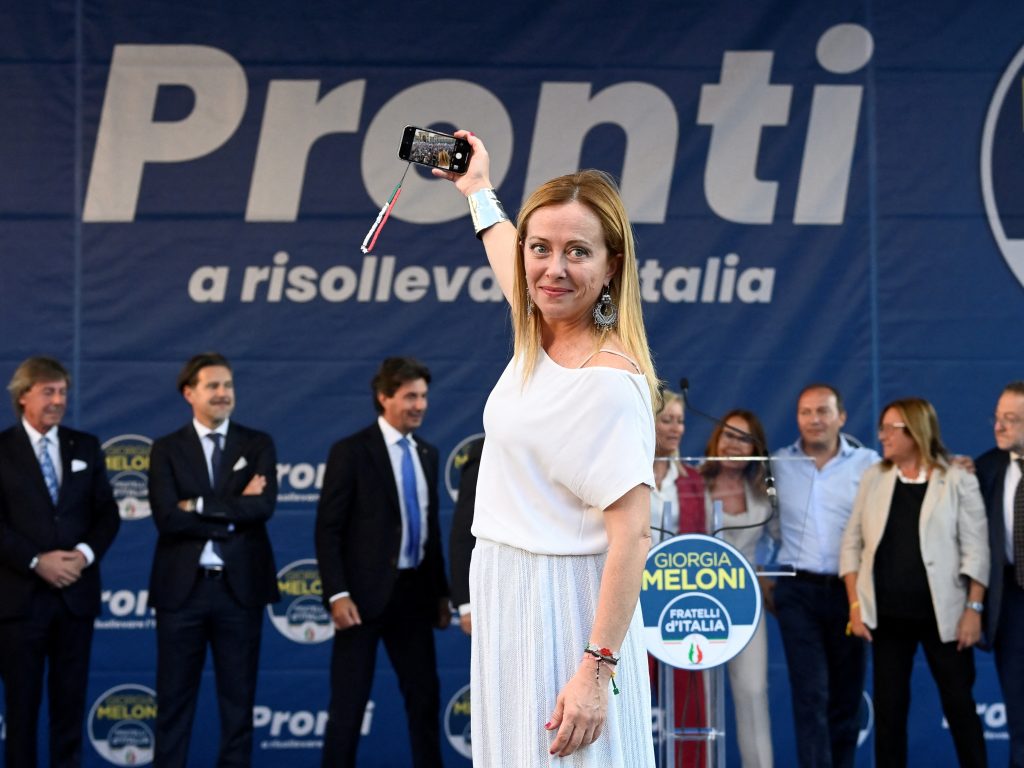 Italy’s general election promises victory for the right-wing alliance — thanks in part to an electoral system that everyone criticizes but no one has sought to change. The current law gives a huge advantage to parties who run in coalitions, who can win a large majority of seats even on well under 50 percent of the vote. Ahead of the September 25 election, the right-wing parties have overcome their divisions to make such an alliance: Giorgia Meloni’s Fratellid’ Italia, Matteo Salvini’s Lega, and Silvio Berlusconi’s Forza Italia will stand united, whereas their center-left rivals will not. Polls suggest that for the first time the election’s main winner will be the most radical right-wing force in Parliament: Meloni’s party, the heir to postwar neofascism.

One of the causes of this likely outcome is the dismal situation of what New Left Review founder Perry Anderson called Italy’s “invertebrate left.” This is the land of Antonio Gramsci and Enrico Berlinguer, and until 1991 it had the strongest communist party in the West. Yet Italy’s left-wing parties have now been undergoing a deep crisis for over a decade.

Today the largest party that mainstream media call “left-wing” is the Partito Democratico (PD) — though many would dispute that it belongs to the Left. This party was born from a bizarre union, in 2008, of former Communists and former Christian Democrats, for half a century after 1945 the largest party of government. In a few years, former Christian Democrats took over the PD, first with Matteo Renzi and then with Enrico Letta, resulting in policies that often hurt the working class (for instance raising the retirement age and getting rid of workers’ protections against firing). Today workers and the inhabitants of poorer neighbourhoods vote more often for right-wing parties than for the PD, whose voters are more likely to be found among the highly educated and wealthy.

PD leader Letta has also made two serious mistakes in the campaign itself. First, after the crisis that sank Mario Draghi’s “national unity government” in July, Letta refused an alliance with the Five Star Movement. This, even though the PD has long sought to integrate this eclectic party into a “center-left” pact — one that could have made it a serious contender for victory in these elections. Moreover, Letta long persisted in claiming that he sought to continue Draghi’s policies, despite signs of popular dissatisfaction at measures insufficient to tackling one of the most serious economic and employment crises of recent decades. Letta realized his mistake too late — and the left-wing varnish given to his campaign in recent days will probably be insufficient to regain him now-departed working-class votes.

The PD faces competition from another party that is today widely perceived as left-wing: the Five Star Movement (M5S), led by Giuseppe Conte, who was prime minister from 2018 to early 2021. This party does not in fact have any strong left-wing pedigree: this is the same Conte whom Donald Trump even recently called “my friend” in memory of their excellent relations when he was US president and Conte the Italian premier, initially at the head of a Five Star coalition with the far-right Lega.

Indeed, this party has long proclaimed its rejection of the left/right divide and thus considers itself free to act as it pleases, without ideological scruples. Founded by comedian Beppe Grillo, it grew rapidly in the early 2010s as a protest against all existing political parties and then became the single most popular force in the last general election, held in March 2018.

Up to that point, Conte had been a lawyer and university professor unknown in political circles: he suddenly emerged from anonymity when he was chosen by Five Star to lead the government with the then main right-wing party, the Lega, characterized by its war on immigrants from Africa and the Middle East. When Salvini put an end to this first government led by Conte in summer 2019, convinced that new elections would bring him victory, Conte did not hesitate to ally with the PD to form a new ruling coalition, of completely opposite political orientation to the previous one. Through both coalitions, its support steadily flaked away.

This second Conte government was in turn felled by Matteo Renzi in February 2021, amid the economic crisis prompted by the COVID-19 pandemic. During the subsequent government led by former European Central Bank chief Draghi, the M5S — which had in the meantime said goodbye to several moderate leaders — characterized itself as a left-wing force. In this, it especially drew on the fact that its most popular success during its years in government was the introduction of the “citizens’ income” for the poorest, helping many (especially young) people in economic difficulty during the pandemic and now the continentwide economic crisis aggravated by the war in Ukraine.

In the current election campaign, Conte has been skillful in emphasizing his party’s left-wing credentials, trying to steal votes from the PD and the radical left. But given the precedents, no one can know for sure how he might behave after the elections and with whom he would be willing to ally.

Finally, the radical left again arrives at these elections divided. A small party called Sinistra Italiana (SI) has chosen, as in the past, to unite for the elections with the PD in order to be sure it can elect a few MPs: this decision was also challenged by a good part of its members who — weary of the PD’s centrism and keen to form a broad front against the Right — would have preferred an alliance extended to include Five Star.

Two other small parties — Rifondazione Comunista, born in 1991 after the end of the old Partito Comunista Italiano (PCI) and itself capable of reaching almost 10 percent of the vote in the past and the much newer Potere al Popolo, this summer invited to a series of meetings in some US cities — have joined forces in a new grouping called Unione Popolare. Its spokesman is the former Naples mayor Luigi de Magistris, seeking to bring the radical left back into Parliament after an absence that has lasted since 2008. This list is standing nationwide — other smaller left-wing forces only present themselves locally, with no hope of electing MPs.

De Magistris was mayor of Naples for ten years (from 2011 to 2021) thanks to the support of civil society movements as well as the same far-left parties that he has now united for these elections. Last year he led the Left to an excellent result in the regional elections in Calabria, taking some 17 percent support. He is now attempting to repeat these successes at the national level with the help of the endorsement of the French left-wing leader Jean-Luc Mélenchon, who visited Rome last week.

The Unione Popolare, whose name adopts that of Mélenchon’s own 2022 campaign vehicle, has a program focused on the defense of workers, the needs of the poorer layers of Italian society, and the revival of the welfare state, especially public health and schools. Opposed to both Russian and Ukrainian nationalism, it calls for decisive action by the international community and the European Union to end the war through negotiations and talks.

The Unione Popolare is rising in the polls. But it was only created at the start of July and, in a hostile media environment, faces a race against time to make itself known to the voters. Since polls are suspended in the last two weeks before the vote, despite many encouraging signs it is difficult to say whether it will exceed the 3 percent vote threshold needed to enter Parliament. This would be a real breakthrough for today’s Italian left, a great encouragement to get out of its “invertebrate” condition and, perhaps, begin its political and organizational renaissance. (IPA Service)