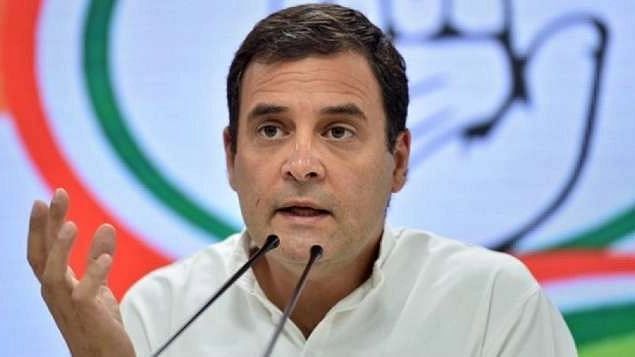 Rahul Gandhi’s homily that unlike regional parties which “lack an ideology” and “have different approaches”, Congress is a party with an ideology has evoked strong reaction from the leaders of other opposition parties. Questions are being raised what the authority does he enjoy to speak in this manner? What is his locus standi in the Congress? Except being a Gandhi scion and a member of the Lok Sabha he has no other identity.

He was once the president of the Congress. He does not even hold any organisational post which provides him the right to speak on ideology and issue diktat about the Congress having alliance with other opposition parties.

Some opposition leaders feel disheartened at the stance of Rahul and feel that Sonia Gandhi instead of being carried away by family interest should reconcile to the reality that Congress is no more a viable organisation which could lead the opposition pack. More over she should have goaded Rahul from behaving and speaking as the chief of the Congress.

The fact of the matter is Rahul does not know when and what to speak. He has been trying to project himself as the public face of opposition who can take Narendra Modi head on. But it is utopia. Simply issuing tweet does not confer upon him  the crown of the future prime minister. Speaking at the Chintan Shivir, Rahul said the Congress was mounting an ideological resistance to the onslaught of the RSS.

A feeling has also gripped the opposition circle that opposition unity could not acquire shape and character due to non conforming interference of Rahul Gandhi. He gives the impression that he is the supreme leader of the Congress. But in reality he has no contact with the party’s rank and file and does not have proper understanding of the political pulse of the country. Unfortunately he is reluctant to take the initiative. His tweets are only for keeping him relevant in the politics. The tweets are primarily followed by the urban people not by the rural people.

The opposition leaders also question his authority to comment that opposition parties “lack the ideology” to take on the BJP and RSS. It is the time Rahul must look at  the  ground and refrain from dominating the opposition space. They also seek to know what he has done to bring together the entire anti-BJP forces and parties together.  In fact a senior leader of JMM said; “It is Rahul Gandhi’s self-assessment and he is entitled to his opinion, but who gave him the authority to comment on ideology? How are we running the party without any ideology?” He even said that Rahul’s own statement ran contrary to the declaration adopted by the Congress at the Chintan Shivir about keeping options open for alliances with “like-minded parties”. The JMM spokesperson Supriyo Bhattacharya said: “The fact remains that it is these regional parties on which the Congress is dependent for a fight or a win, be it the JMM in Jharkhand or the RJD in Bihar.”

Describing Rahul’s statement as “unfortunate” the RJD MP Manoj Jha said that had the former Congress president been mindful of the outcome of poll fights against the BJP, he would have realised “the ideological and electoral commitment that is brought by such regional outfits”.  It is culture of sycophancy which underlines the functioning of the Congress that Rahul has come to believe even the opposition leaders as subservient to him.  Rahul’s political and organisational acumen have always been on test as he over these years has miserably failed to provide a direction to the party and lead it from the front.

It is interesting to note that some time back Jha had repeated RJD leader Tejashwi Yadav’s advice for the Congress: “There are 220-225 seats where the BJP and Congress are in a direct fight. The Congress should leave the other spaces to regional parties and settle to the idea of a co-traveller.” But he won’t.  It is the culture of sycophancy that he likes the opposition leaders to call on him seeking seats.

Mamata Banerjee has been striving to give shape to the opposition unity. But Rahul and the Congress leadership refuse to leave the space. They are forcing Mamata to accept their leadership. Why should Mamata accept the dictates of the Congress leadership? There must be some amount of rationality. The narration that Congress was once the most dominant and relevant does not entitle it to make claim for the top place, or play the role of big brother  all the time.

Rahul Gandhi should do some introspection and first consider the condition of his party all over India and then make such comments. Party’s vulnerability has been exposed in the Uttar Pradesh election results. It is irony that Rahul does not understand and grasp the changes that have taken place in the political economy of the country.  He should  realise that the old base of the Congress has lost its trust in the party and its leadership and the new emerging electorate has its own  economic and social priorities. They want the Congress to reinvent itself.

Rahul must try to find out why Navin Patnaik leader of BJD continues to the chief minister for last 20 years. Navin has changed the approach of the BJD keeping in conformity to the needs of the new generation.  Indian nation in the phase of emergence of regional parties and Rahul must take note of this development. Regional parties are being trusted by the people and given more and more responsibilities.

In a bid to intensify efforts to bring together the anti-BJP parties on one platform, Telangana CM KCR met several Opposition leaders. Expanding his outreach to the ‘like-minded’ parties, KCR had backed leader Rahul Gandhi over alleged derogatory remarks of Assam Chief Minister Himanta Biswa Sarma against his father Rajiv Gandhi.  It was a good gesture from TRS to the Congress but Rahul did not reciprocate.

It is worth mentioning that at 1998 Pachmarhi Chintan Shivir, it was decided that Congress would not ally, whereas in 2003, Shimla Chintan Shivir – the party, decided that they were ready for an alliance. Congress has been forging alliance according to its convenience.  The Congress won two Lok Sabha elections after the 2003 chintan shivir. After the 2014 Lok Sabha elections, the Congress graph is on steady decline. A viable alliance with the regional parties on the basis of respect, can only save Congress from electoral disaster. Congress president Sonia Gandhi has to keep this mind while formulating the party’s poll strategy. (IPA Service)

Central BJP Leaders Are Depending On Yogi Adityanath For Next Lok Sabha Win
Posting....