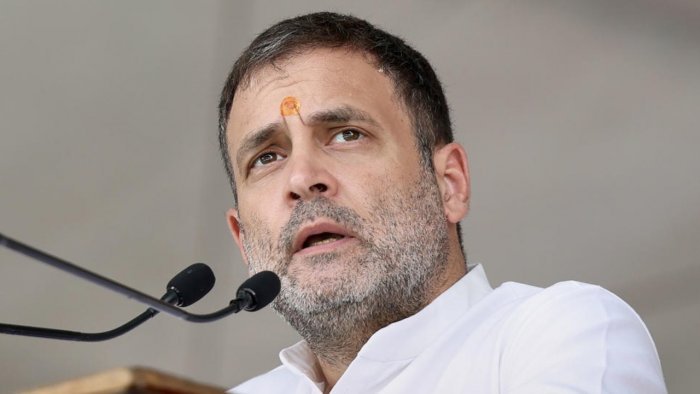 With the ongoing war of words between former Karnataka chief minister PC Siddaramaiah and state president D K Shivakumar over the chief minister’s candidature within the Congress, former Congress president Rahul Gandhi appealed to the party’s state unit leaders to work amicably with fraternity for the 2023 assembly polls. He appealed against lashing out any rash words publicly on leadership issues and other internal matters. Rahul attended the Karnataka unit’s political affairs committee meeting, where discussions were held on organisational matters and planning was done regarding the preparations for the upcoming assembly polls. Meanwhile, Rahul Gandhi got initiated into the Lingayat sect by the seer of Muruga Mutt in this district headquarters town in central Karnataka in the presence of various party leaders. The Lingayats, about 17 per cent of Karnataka’s population, have traditionally been BJP voters. With Rahul’s visit to the poll-bound state, the Congress is hoping to broaden its charisma and appeal to project unity within the party too.

Whispers are doing the rounds in Uttar Pradesh BJP that an appointment of new full-time state party president would be done soon. According to BJP sources a Brahmin leader may be named from Western Uttar Pradesh as the new state unit president. The top names doing the rounds are those of Dr. Laxmikant Bajpai, Satish Gautam and Srikant Sharma. Meanwhile, Uttar Pradesh BJP chief Swatantra Dev Singh, who completed his three-year tenure, has sent his resignation to party national president JP Nadda, and is continuing as the state party chief till his successor is appointed. Among the state’s political circles, it was evident that the party’s central leadership had started looking for Singh’s replacement soon after the party’s triumph in the UP polls for the consecutive second term in March, when he joined the Adityanath ministry 2.0, in accordance with its one man-one post policy.

Congress suspended three Congress MLAs from Jharkhand, stating that they were trying to topple the Hemant Soren government in collusion with the BJP. Senior leaders in the Congress said the party leadership could make some switches in the cabinet in order to assuage the complaints of some of its legislators. The buzz is that Cabinet reshuffle would occur soon to counter the BJP plan to topple the government. Meanwhile, Congress MLA Kumar Jaimangal Singh from Jharkhand has now claimed that his colleagues, who were arrested in West Bengal over the seizure of cash worth lakhs, had asked him to accompany them to Guwahati to meet Assam Chief Minister Himanta Biswa Sarma. Singh also claims that it was Sarma who had promised them a ministerial berth for destabilising the JMM-Congress government. However, Sarma denied the allegations.

As many as 17 members of Opposition parties, including from TMC and AAP, plus one independent Rajya Sabha MP Kapil Sibal, have signed a joint statement expressing deep disagreements on long-term implications of the recent Supreme Court judgement upholding amendments to PMLA, 2002 and called for its review. The Opposition leaders fear that the changes would only strengthen the government’s hands to indulge even more in political vendetta targeting its opponents. On July 27, the apex court upheld the Enforcement Directorate’s (ED) powers relating to arrest, attach property, search and seize under the PMLA which was challenged by multiple petitioners. The Opposition parties will be meeting President of India for this matter soon.

Samajwadi Party senior leader Ram Gopal Yadav raised the issue of atrocities on their workers, minorities, and backward, during his meeting with UP Chief Minister Yogi Adityanath. According to reports, the memorandum given by the SP leader to the UP CM, did not mention backwards or Muslims, but was focused on former SP MLA Rameshwar Singh Yadav and his brother Jogendra Yadav mentioning that they were being harassed and fake cases were filed against them. In the memorandum, Ramgopal Yadav also urged the CM to order a CBI or SIT probe into the fake cases filed against Rameshwar and his family members. On the other hand Pragatisheel Samajwadi Party Chief Shivpal Singh Yadav and SBSP Chief Omprakash Rajbhar asked the SP leader why did he not speak for senior party leaders Azam Khan, Nahid Hasan and Shazil Islam during his meeting with the UP CM.

In the political buzz around the Cabinet reshuffle in West Bengal, eight new faces including former BJP MP and Union minister Babul Supriyo were inducted, and Mamata Banerjee dropped four from her Council of Ministers to counter the BJP plan to topple the government. TMC senior leaders are afraid of saffron party’s ‘Operation Kamal’ in Bengal too. The reshuffle came days after Trinamool Congress (TMC) chief sacked senior minister Partha Chatterjee and suspended him from the party following his arrest by the ED over the school jobs scam. The reshuffle has brought leaders outside of Kolkata into the Council of Ministers and in the last 11 years, the Cabinet was always dominated by leaders from Kolkata. But, this time leaders from outside Kolkata have attained the chance. (IPA Service)