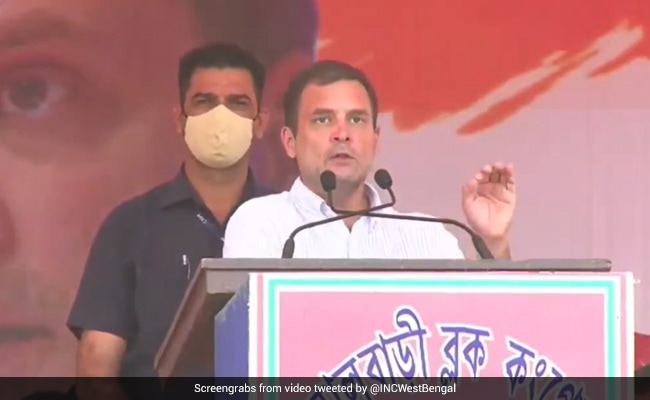 Congress MP Rahul Gandhi held his first rallies in Bengal, where four of eight phases are over

Rahul Gandhi on Wednesday made his first campaign appearance in Bengal and tried to pitch the election – widely seen as a shoot-out between the Trinamool and the BJP – as a three-way scrap that includes the Congress, and a choice between the politics of principle and that of convenience.

His no-show in Bengal – where four of eight poll phases are over – till now had raised eyebrows.

There was speculation his absence – and that of other senior leaders – was to avoid antagonising Ms Banerjee in case of a post-poll tie-up. That speculation was soon quashed, with Mr Gandhi targeting both the Chief Minister and Prime Minister Narendra Modi, who has led the BJP’s charge.

“You gave an opportunity to Trinamool but they failed. Has Mamata built roads… colleges? People have to venture out for jobs… this is the only state where you have to pay ‘cut money’ (bribes) to get jobs,” Mr Gandhi, piggybacking on the BJP’s preferred attack, said in Uttar Dinajpur district.

“We have never aligned with the BJP and the RSS (the BJP’s ideological mentor). Our fight is not just political but ideological too. For Mamataji, it is a political fight… they have been former allies,” he said, in a reference to Ms Banerjee’s time as a minister in the Atal Bihari Vajpayee’ government.

Turning his attention to the BJP, Mr Gandhi accused the party of wanting to “destroy Bengal’s culture and heritage”. “… nothing to offer except for hatred, violence and divisive politics,” he said.

“In every state, they say similar things like ‘sonar Bangla‘ (golden Bengal) but they only divide people on the basis of religion, caste and language,” Mr Gandhi said, adding, “In Assam, they are doing this. In Tamil Nadu, they are trying to do the same thing with AIADMK (their allies).”

On the pandemic, though, Mr Gandhi and Ms Banerjee agreed that the Prime Minister had failed.

“PM Modi said ‘bhaio-bheno‘, beat thaali and corona will go. He said ghanti bajaao. He asked people to take out mobile phones and switch on flashlights… This man is the Prime Minister of India… rather than helping labourers, he asked them to ring bells,” Mr Gandhi said.

Ms Banerjee, meanwhile was at a rally in Jalpaiguri Sadar.

“Where were you (PM Modi) all these days? Again you have brought Covid and run away. We cured everything. If they had given vaccination to all people, there would be no new cases,” she said.

“Do you know… they have got a whole lot of people into the state. In the name of election campaign they got so many outsiders and spread the disease here and run away… and now they say ….give us the vote!” the Chief Minister raged.

The Congress, led in Bengal by Adhir Ranjan Chowdhury, is contesting 96 of the state’s 294 seats in alliance with the Left and the fledgling Indian Secular Front led by a popular Muslim cleric.

Mr Chowdhury has firmly ruled out backing Mamata Banerjee and the Trinamool, under any circumstance. This despite the Chief Minister calling out to opposition parties to rally around and defeat the BJP – a call answered by Congress allies Shiv Sena, Sharad Pawar’s NCP and Bihar’s RJD.

That said, the coronavirus could emerge as an unlikely common ground between the two parties once the dust settles after votes are counted on May 2.

With input from ANI, PTI