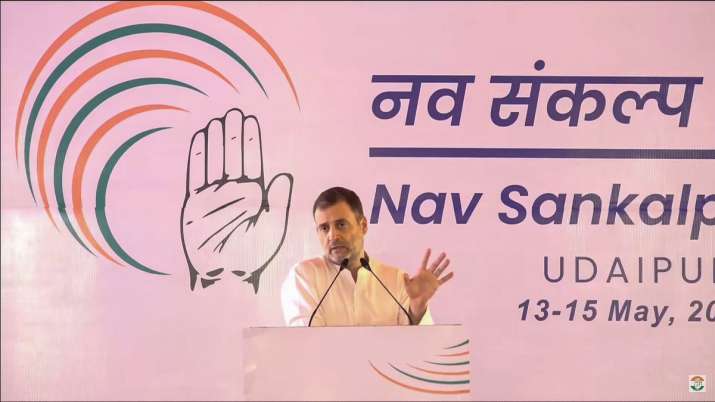 Congress leader Rahul Gandhi has struck a big blow to the efforts of the opposition parties towards forming a combined front to take on the ruling BJP in the Lok Sabha polls in 2024. Gandhi said in the Congress Chintan Shivir in Udaipur that the Congress is the only alternative to the BJP and the regional parties cannot be the face of the opposition. His view is that the regional parties have no ideology and the only the Congress, with its strong ideology, is in a position to fight the BJP.

Rahul’s comments are not only politically ill-timed but also factually wrong. Already, the regional parties like the RJD, Trinamool Congress and the JD(S) have reacted angrily. Others like NCP, DMK and Shiv Sena are also feeling the same way. At a time when the Congress president Sonia Gandhi is talking of an alliance of the political parties who are opposed to the BJP rule and underlining the importance of removing the Narendra Modi government from power in the coming Lok Sabha polls, Rahul Gandhi has created a mess.His comments have generated an unnecessary rift between the Congress and the regional parties which are fighting the BJP.

The Congress is the largest opposition party in the country in the anti-BJP camp. Nobody disagrees to that, but the ground reality is that in the last eight years since Narendra Modi took over as the prime minister, the Congress strength has declined steeply, while the regional parties have emerged stronger. Different political parties have varying ideologies, but these parties have fought BJP and defeated them, while the Congress has been defeated in most of the direct fights with the BJP.

Let us look at the facts. In the 2019 Lok Sabha elections, the Congress and the BJP were contestants in 374 seats the Congress lost in 92 per cent of the seats where it fought the BJP. As against the Congress, other regional parties did much better by fighting the BJP in their respective states. As of now, the Congress runs the state governments on its own in two — Rajasthan and Chhattisgarh — and is a partner in the ruling coalition in three states, Tamil Nadu, Maharashtra and Jharkhand. The party lost Punjab to AAP in the latest assembly elections and witnessed its worst performance ever in the crucial Uttar Pradesh assembly polls getting only two seats out of the total of 403.

Rahul Gandhi may feel that only the Congress has the ideology to fight BJP, but in all the states which went to polls in the last two years, the regional parties fared much better in defeating the BJP compared to the ‘ideology-driven’ Congress. In Bengal, in the 2021 assembly elections, the BJP mobilised all its muscle power and huge financial resources to dethrone the Trinamool government, but it faced its worst defeat. Trinamool got more seats — 213 out the total of 294 — while the BJP got only 77 seats. The Congress could not secure a single seat.

How will Rahul Gandhi explain this victory of Trinamool in the assembly elections? The Congress certainly needs more ideological push and that is welcome if Rahul takes the lead, but that does not mean the Congress can undervalue the ideology of the other regional parties which are fighting the BJP and winning. In Kerala, the CPI(M)-led Left Front is fighting to keep BJP out and has been successful. In Tamil Nadu, the alliance under the DMK supremo MK Stalin is doing a fantastic job in keeping the BJP and its ally AIADMK at bay. In fact, the substantially weakened Congress has seats in Lok Sabha in 2019 polls from Tamil Nadu, courtesy DMK, its alliance partner.

In 2019 Lok Sabha polls, there were 250 direct fights between the Congress and the BJP, and the Congress won just six seats.  This itself tells the real story of the preparedness of the Congress in taking on the BJP. In Uttar Pradesh, out of 80 Lok Sabha seats, the Congress got only one in direct fight against the BJP; in Bihar, the party got one out of 40; in Madhya Pradesh, one out of 28; in Chhattisgarh, it got two out of 11; and one in Jharkhand out of14. In other states like Gujarat, Rajasthan, Haryana, Delhi and Himachal, the party got zero seats in 2019 elections. However, last year, the Congress got one Lok Sabha seat in Himachal in by-election.

An analysis of the Congress seats in Lok Sabha now shows that out of its 53 members, 28 are from  southern statesalone.15 are from Kerala, 8 from Tamil Nadu, three from Telangana and one each from Karnataka and Puducherry. In two states, Kerala and Tamil Nadu, the Congress got seats due to combined strength of its alliance partners; otherwise, the 2019 tally would have been much lower. This stark reality that the Congress is not the natural party of governance anymore and it has to treat its alliance partners, especially the powerful regional parties with respect, should be recognized by Rahul Gandhi if he really means to work with the regional parties to take on the Prime Minister Narendra Modi.

The Udaipur Chintan Shivir has laid no clear line on alliances to face the challenge of the BJP in the coming Lok Sabha elections. The poll strategist Prashant Kishor in his recent presentation to the Congress Party underlined the immediate need for finalising the alliance strategy taking into account the strength of the party in the respective states. This can be a three-point strategy. First, there are states where the Congress is the main party contesting the BJP like Rajasthan, Chhattisgarh. In these states, the Congress will be the arbiter and it will depend on the Congress to choose small allies if any. Second, there are states where the Congress is dominant along with another strong ally, like Karnataka. Here the Congress and the other ally have to come to some understanding. And the third category is where the Congress is minority partner like Tamil Nadu, Maharashtra and Jharkhand where the participating parties will have to decide on the basis of actual strength of the parties at ground level.

There will be states also where the Congress will have to fight with the regional parties, like Andhra Pradesh, Telangana and West Bengal. The party will have to do that, but theobjective should be to form an understanding in the post Lok Sabha election scenario. The Congress leadership has to show maximum flexibility in dealing with the regional parties if the GoP really wants to emerge as the front runner of the opposition alliance. Rahul Gandhi cannot do that with his latest approach. (IPA Service)