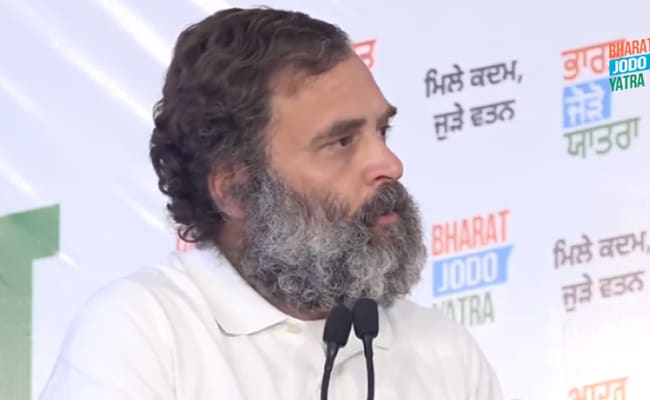 Congress leader Rahul Gandhi Tuesday accused the BJP and the RSS of capturing institutions and putting pressure on the Election Commission and the judiciary, and also declared that he will not visit an RSS office even if someone slits his throat.

Answering a question, at a press conference here, on the possibility of reaching out to his cousin and BJP MP Varun Gandhi, he said their ideologies do not match.

The Congress leader said if Varun walks into the yatra he might face a problem, implying that the BJP may not approve of it.

“I can never go to an RSS office. You can slit my throat, but I will not go. My family has an ideology, it has a thought system,” he told the presser on the sidelines of the Bharat Jodo Yatra.

“I can meet him with love, hug him. But I cannot accept that ideology, that is impossible,” he said.

I have read the Gita & Upanishads, & I have never heard that Hindus should be aggressive. Hinduism is all about self-observation and compassion. Even Lord Rama felt compassion for Ravana when he was dying.

Listen to Shri @RahulGandhi as he reflects on the meaning of Hinduism. pic.twitter.com/9X9hT1VTXi

Answering a related question, he said Varun Gandhi once told him that the RSS was doing good work. The Congress leader recalled that he then told his cousin that if he had read about and understood what his family stood for, he wouldn’t have said such a thing. Varun Gandhi is the son of Sanjay and Maneka Gandhi.

His remarks on Varun Gandhi come amid speculation that the BJP MP, who often has been critical of his own party, might be joining the Congress.

“This is not a fight between one political party and another political party. It is now a fight between the institutions which were captured by them and the Opposition. Out of which one factor is EVM,” he said to a question on Electronic Voting Machines. Normal democratic processes in the country are now “missing”, he claimed.

The former Congress chief also asserted that it is abundantly clear that economic distress, unemployment and price rise will deal a “severe blow” to the BJP in the upcoming elections in various states.

On RSS chief Mohan Bhagwat’s recent remarks that “it was natural for Hindus to be aggressive and Muslims should abandon the narrative of supremacy”, Rahul Gandhi said, “I do not know which Hinduism he is quoting. I never heard this. I have read the Gita and Upnishads and I never heard that Hindus should be aggressive.” “Hinduism is all about self-observation and about understanding the self, about humility. I do not know what he is talking about. Perhaps he has not read these books,” he said.

“Even Lord Ram felt compassion for Ravana when he was dying. I do not know from where this gentleman was getting these ideas. Certainly, they are not Hindu ideas, they are RSS ideas,” he said.

Modi advises leaders not to comment on irrelevant issues