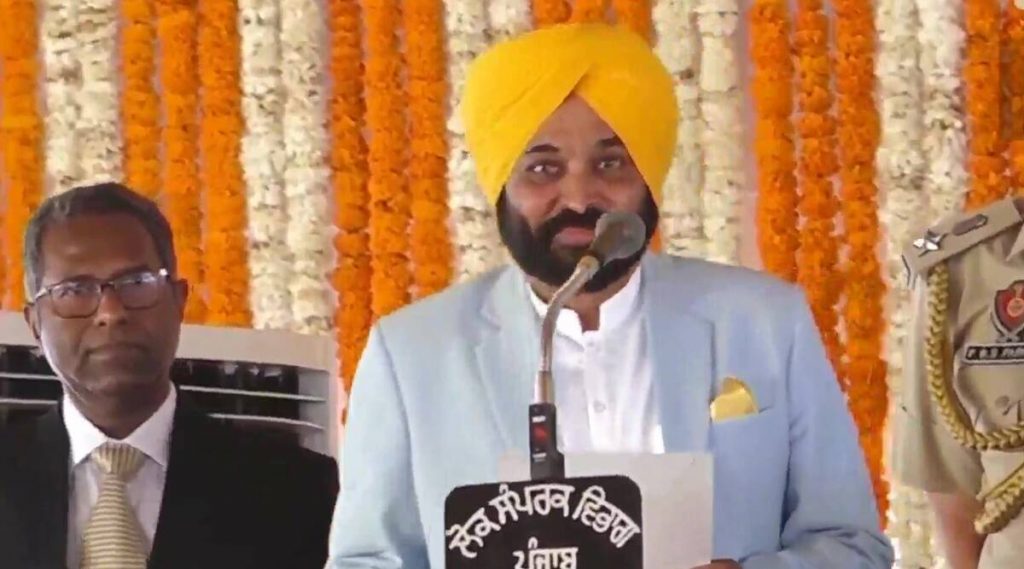 AAP’s Punjab Chief Minister Bhagwant Mann chose to launch himself from Shaheed Bhagat Singh’s maternal village Khatkar Kalan, 80 km from Chandigarh. Does that make Mann a revolutionary? Mann is a comedian-turned-CM, but Mann is serious about preempting people from cracking jokes on his comedian status.

That said, Bhagat Singh is the last sanctuary for all Punjab politicians irrespective of party, and the AAP all-in-one Arvind Kejriwal is a self-styled “anarchist” who, now claims he’s a “sweet terrorist” who “builds hospitals and schools”. The “sweet terrorist” was at Mann’s swearing-in ceremony on March 16 along with Delhi MLA Raghav Chadha and other AAP leaders. The two have Mann pretty much sandwiched.

Don’t forget Bhagwant Mann has a steep slope ahead, one that can turn into a slippery slope at any stage of the climb, AAP’s brute majority notwithstanding. The AAP has made promises and if Mann thinks a carbon copy of the ‘Delhi Model’ will do the trick, then he doesn’t know his yellow turban from Kejriwal’s grey-blue muffler!

The AAP government of Delhi cannot wash its hands off the “second wave” deaths in Delhi. Come to think of it, AAP and the Kejriwal government had made it a habit of hanging in the shadows of the central government when it came to handling crises. The Covid second wave and the farmers’ protests were examples.

Bhagwant Mann can’t eel-away like Arvid Kejriwal has when confronted with a crisis. Punjab is not Delhi like Kerala isn’t Uttar Pradesh. Bhagwant Mann will not have the luxury Kejrilwal had—escape responsibility, and refuse accountability in the name of being burdened with the only “double engine ki Sarkar” in India.

Punjab Chief Minister Bhagwant Mann will have to shoulder responsibility with the Modi Government on many matters regarding Punjab because Punjab is a border state and that makes Mann’s government especially accountable for India’s national security. More so, with suspicions raised that Kejriwal wouldn’t mind becoming “Prime Minister of Khalistan!”

Punjab is not a comedy circus, but from now on and for the next five years, Bhagwant Mann could expect Kejriwal-trouble because if Kejriwal shares anything with Navjot Singh Sidhu, it’s a “love” for Pakistan, which can boomerang on Mann like it did on his predecessor Charanjit Singh Channi, who had to suffer Navjot Singh Sidhu’s laughter circus till it was too late.

Bhagwant Mann faces challenges galore. The 92-seat brute majority places him in the league of Arvind Kejriwal. But Kejriwal had it easy compared to Bhagwant Mann. Punjab dwarfs Delhi and Punjab’s problems are uniquely “punjabi”, like Delhi was never ‘Udta Dilli” nor can the BSF be deployed on Delhi’s borders.

There is also the restless Punjab farmer whose protests didn’t take the BJP out in the manner expected, but which did not benefit the Congress in the way they were supposed to. Kejriwal and his AAP cleverly strung along with farmer sentiments but remained backstage all through the protests. And, now, if Mann doesn’t deliver, he and AAP will have to pay back in spades!

The election manifesto of the AAP is a sliver of promises, which if they are delivered will bring about far reaching changes in the life of the Punjabi. The “youth of Punjab ”, which the AAP manifesto spoke to, will not settle for a few hundred ‘Mohala Clinics’ as Punjab is not just another impoverished state. Punjab’s youth want jobs. Kejriwal’s ‘Delhi Model’ predicates itself on freebies and jobs don’t sprout from freebies.

AAP has not brought about an industrial revolution in Delhi, can it in Punjab? There is no dearth of the industrious in Punjab. Kejriwal and Mann wouldn’t be able to make a getaway with excuses that are the staple of legacy parties and professional politicians, among whom there are now quite a few AAP netas, too.

Promises of jobs and freebies got AAP its brute majority in Punjab. With promises on education, jobs, electricity, healthcare and agriculture, Mann will have his hands full. The AAP slogan ‘Ik mauka AAP nu’ (One chance to AAP!) is the Damocles Sword hanging on Mann’s head. That is, if he survives the double-engineering of Arvind Kejriwal and Raghav Chadha. (IPA Service)