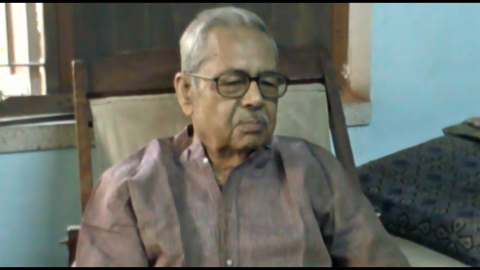 Professor Brajadulal Chattopadhyaya who passed away in Kolkata on July 13 at the age  of 82,was one of the two pillars on whom our understanding of Early Medieval India stood, the other being Professor Ram Sharan Sharma. The concept of the ‘Early Medieval’ is immensely important in Indian historiography which was long dominated by the perception of an opposition between a ‘Hindu’ Ancient India and a ‘Muslim’ Medieval India.

The concept of a different periodization going beyond the tripartite division set by the colonial masters, not on the basis of religious affiliation of the rulers, but on the basis of social-political-economic changes, revolutionized our understanding of Indian history. Chattopadhyaya’s works kept on reshaping this new understanding: of Indian history.

He sometimes showed how the religious/caste identities of the rulers could also be a result of changing historical patterns (as shown by his seminal works on the rise of the Rajputs), sometimes arguing how the ‘Making of Early Medieval India’ (c. 600-1300 CE) was not so much about political fragmentation and feudalization and economic deurbanization (as Sharma argued), but about a new kind of integrative polities.

He talked about a third wave of urbanization, sometimes looking at urbanization beyond settlement patterns and demographic details by focusing on the culture that constituted the ‘city-ness’ of a city, and sometimes by utilizing the Sanskrit epigraphic materials to understand Hindu-Muslim relationship in a new light beyond the binary of the self and the other in his pathbreaking ‘Representing the Other?’. Naturally, there could not be a better historian to educate us about the ‘concept of Bharatavarsha’ and the interplay of unity and diversity that made this rich civilization in the recent types.

I had first met this legendary historian as a scared young speaker in one of my early presentation and then as a job-seeking applicant in an interview panel. On both the occasions, despite his strong personality and gravity, Chattopadhyaya (better known as BDC, particularly in JNU) appeared an extremely approachable, kind, and warm personality. We had been lucky enough to feel that warmth more closely as he shifted close to our locality from Uttarpara, few years back.

While his body was causing him one trouble after another, his mind worked in superb clarity and sharpness, inspiring many new works and sharing many novel ideas. However, all the discussions would not necessarily be academic, but could often be anecdotes about his early life, nostalgic reminiscences of Uttarpara (the place my partner also belong to), or the continuous attacks on the plurality and diversity of Indian culture he so thoroughly depicted in his works.

The last such conversation took place not very long back, after some controversial comments by Akshay Kumar on historical pedagogy during a movie promotion, echoed immediately after by the union Home Minister. Clearly agitated, he had shared his ideas about how to respond to these comments in both Bengali and English, and then concluded that the rebuttal must come from the younger generation. Why should all protests in defense of historical scholarship initiate from the Romila Thapars and Irfan Habibs? The day one of the outcomes of our discussion got published, I tried to contact him but heard that he was hospitalized and scheduled to return home the next day. He suffered a heart attack the next morning, the condition worsened steadily, and the expected meeting never took place.

Professor Brajadulal Chattopadhyaya, one of the greatest historians of South Asia, one of the strongest narrators of the multidimensional and pluralistic civilization that is India, and a guru to generations of students of history, left us on the day of Guru Purnima, disappointed with the dystopia present yet optimistic about the younger generation, leaving us in doubt whether we are worthy at all of that optimism. (IPA Service)